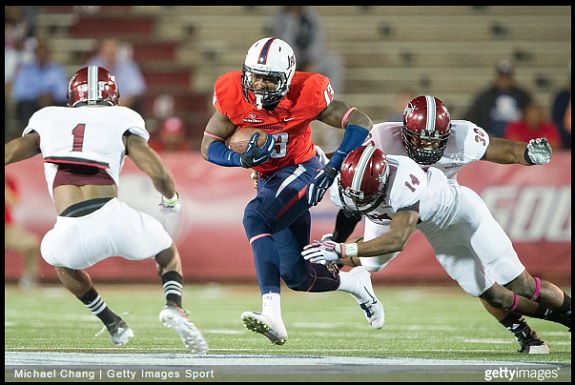 All throughout the offseason, our attention on this site has been mainly focused on the 2015 NFL Draft. While the following may not be a full report on a prospect, it is vital to get to know who you’re potentially drafting on and off the field. With that said, here is an interview that was conducted with South Alabama tight end Wes Saxton, who recently had a pre-draft visit with the Pittsburgh Steelers.

What goals have you set out to achieve in the NFL?

Just being the best player I can be, being coachable and accepting my role wherever the team needs me.

What do you think about people lowering your stock because of who your competition was?

I think it’s unfair to judge a player based on what school he attended, especially when you performed at your highest level against some the best competition in college football, but that what motivates me to work even harder I love it!

Why should an NFL team draft you?

I have a clean background I cause no trouble at all. I’m an explosive guy that can make big plays, very coachable and will do anything asked of me to help the team win.

What do you feel is your biggest strength, and also, what part of your game do you feel you need to work on the most?

My strength is definitely creating mismatches from any position on the field to make plays. As far as weakness I can improve on my blocking with gaining weight and use better technique.

What current or former NFL Player do you most compare yourself to, look up to, or model yourself after?

I don’t pattern my game after anyone I take a little from each player that I like in the league such as Vernon Davis, Charles Clay, Brandon Marshall and Jimmy Graham.

Have you played any special teams in your collegiate career?

I’ve always participated in every special teams in practice, so I have a pretty good idea of what to do when I’m put in that position. But as far as in actual games I haven’t.

What is an NFL Franchise going to be getting with Wes Saxton in terms of on and off the field, and personality?

A great person with a great personality and definitely no problem on or off the field. When it comes to football I just love to play the game, I love to get better and willing to do anything to win.

What was your greatest challenge through your collegiate career?

I’ll have to say changing from WR to TE.

How did you overcome this?

At the end of the day football is a physical sport and I had to mature into the position and do what I had to do to help my team win.

Are you currently working out or shaping up any aspects of your game? If so, what are you working on?

Most definitely, I’m working on all aspects of my game; I feel if you focus on one thing you’ll become rusty at what your good at. So I decide to work on something different every day.

What is something that every GM, scout, coach or fan should know about Wes Saxton?

You’re getting a player that loves the game and knows he is blessed to have the opportunity to play his game and just ready to get to work and prove why I belong in the NFL.

What do you think about potentially being drafted by the Pittsburgh Steelers?

Most people may not see it but Pittsburgh’s and South Alabama’s offense are similar in so many ways. I can see myself playing for the Pittsburgh Steelers, so it’s definitely a good chance.