After finishing up my 2014 sack research on Utah edge rusher Nate Orchard, I thought I’d take a quick look at seven quarterback takedowns that Nebraska edge rusher Randy Gregory registered last season. Surprisingly, all of them were easy to find, so today, I’ll pass all of them along to all of you to see.

After missing the first two games of the 2014 season with a knee injury, Gregory recorded two sacks in Nebraska’s 41-31 win over Miami.

Gregory’s first sack in the game came early in the fourth quarter and on the play he manages to leap over a diving running back who is attempting to cut-block him on the edge. He does a great job of keeping his legs clean while flashing his athletic ability.

Gregory’s second sack against Miami features him coming off the left side of the defense. He uses his long arms to fight off the right tackle, who even tries to hold him. Gregory knocks the football out of the quarterback’s hand for a sack/fumble.

Against Illinois, Gregory recorded 2.5 sacks. His half sack in that game came first. He laid back on the play, initially, with only a small running back being responsible for him. As the play breaks down and the quarterback starts looking for an escape route, Gregory is there to ensure that doesn’t happen. This sack takes nearly seven seconds to happen.

Gregory’s first full sack against Illinois features him splitting the left tackle and guard. You will see him set the tackle up to the outside initially before using his left arm to fight back inside. This is a great effort by Gregory against a double-team.

On Gregory’s final full sack against Illinois, he again shows his great athleticism and hand usage in beating the left tackle to the inside.

Against Rutgers, Gregory is allowed to come free off the right edge uncontested and it results in an easy sack. I’m not entirely sure what the left tackle was thinking on this play as Nebraska only showed a four-man rush.

Against Wisconsin, Gregory registered a half a sack and while his effort on the play was outstanding, it appears as though this one was a scoring gift. I don’t hate him for that as he once again shows great hand and arm usage in addition to some nice bend. 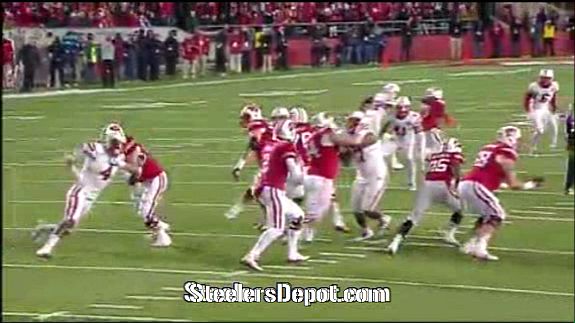 Gregory’s final sack of 2014 came against Minnesota and it features him timing an inside stunt perfectly. Gregory comes untouched on the play up the middle and it results in a 3.5 second sack.

Gregory missed a total of three games in 2014, so he would’ve likely had a few more sacks had he played in those games. While I do think he’s an incredible athlete, you do have to wonder why his sack total wasn’t higher in the games that he did play in. In addition to that, two of his seven sacks consisted of him coming untouched while another half was a bit of a gift.

Gregory did show us last season that he can use his arms and hands effectively in addition to his quickness and ability to bend. While his character red flags might hurt him a little come draft day, he’s still likely be drafted somewhere in the first 20 picks as he would fit in both a 4-3 and a 3-4 defense.