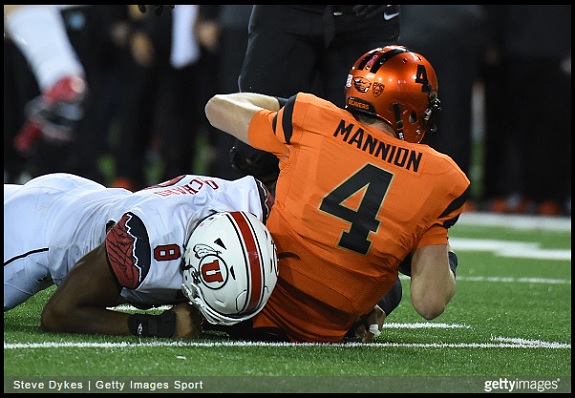 We’ve already taken a look at 7.5 of the first 8.5 sacks that Utah outside linebacker Nate Orchard registered in 2014 and today, we’ll show you four of his next six quarterback take-downs that he tallied against Oregon State, USC and Oregon.

Orchard had two sacks against Oregon State and as you’ll see in this first one, he easily beats left tackle Sean Harlow around the edge with a speed rush. The first of the two gifs again shows Orchards lack of bend, in my opinion.

Orchard again beats Harlow later in the game after rushing 10 yards past the original line of scrimmage. This sack takes 4 seconds after the football is snapped.

Orchard’s lone snap against USC happened on the final play of the game. This time he beats left tackle Aundrey Walker around the edge.

Orchard was credited with two sacks in Utah’s game against the Arizona State, but unfortunately I am unable to locate those for you. That makes three sacks so far that I have failed to locate.

Orchards lone snap against Oregon features him beating left tackle Jake Fisher to the inside. Not only does he get the sack, he forces a fumble.

In Orchard’s final four games of the season he registered 5.5 sacks and we’ll have a look at those in the final post of this series, which I should have for you on Sunday.