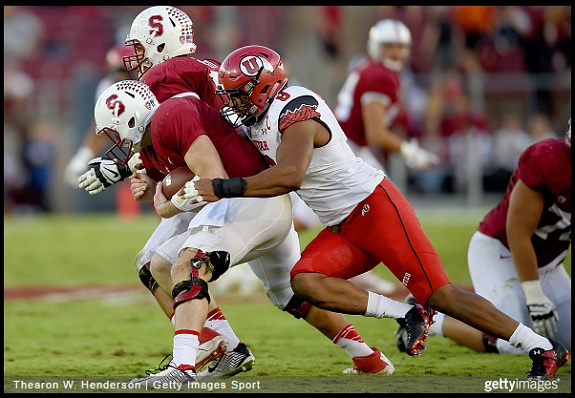 We’ve already taken a look at 11 of the sacks that Utah’s Nate Orchard registered in 2014 and today we’ll look at his final 5.5 quarterback takedowns that came in the final four games of the season.

The first time that Orchard gets to the quarterback in the game against Stanford, he does so by beating the right tackle. He actually shows a few counters on this play as he’s handled initially. His counter to the inside is first handled, but he finally spins off free. He was credited with a half a sack for his efforts.

Orchard’s first full sack against Stanford came with time winding down in the first half and he beat left tackle Andrus Peat to the inside on a tackle/end stunt. He uses his hands well to gain separation on the play. For some reason, Peat and the guard decide not to switch off on the stunt and the quarterback pays for it.

This next sack is perhaps the most impressive one that Orchard had all season. He again uses his hands and arms very well to gain separation from Peat, who is likely to be a first-round draft pick.

Orchard’s final sack against Stanford came in overtime and it was the result of him being allowed to come free off the left side.

On Orchard’s lone sack against Arizona, he beats the left tackle around the edge after lining up way wide. While he didn’t need it, it’s nice to see him use that left arm to fight off any attempt by the tackle to slow him down.

Orchard’s final sack of his college career game in the bowl game against Colorado State and again it’s the result of a nicely executed tackle/end stunt. The right guard actually does a good job initially against Orchard on the switch, but the defensive end wisely uses his left arm to gain separation and access to the gap.

If you’ve kept up with these posts, you have now seen 16.5 of Orchard’s 18.5 sacks from 2014 as I was unable to locate one in the game against Michigan and the one that he had against Arizona State. in those sacks, you were able to see Orchard get to the quarterback several different ways and while he does lack in the bend department, he does show good hand and arm usage in addition to an ability to counter.

Orchard, in my opinion, is a second round prospect and there’s a decent chance that he will still be on the board come time for the Pittsburgh Steelers selection in that round. He could eventually mature into productive 3-4 strong-side outside linebacker with the Steelers with help from linebackers coach Joey Porter.