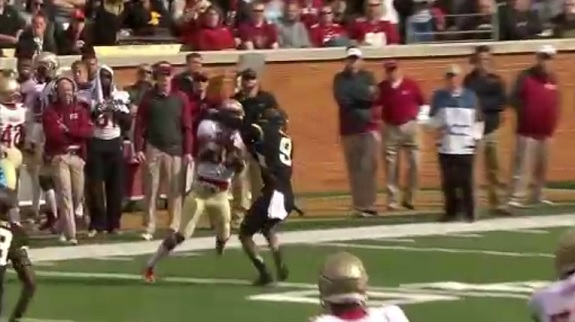 In a Wednesday post, I broke down the play of Wake Forest cornerback Kevin Johnson in his game last season against Florida State. Today, we will go back to the 2013 season and look at Johnson’s play in the home blowout loss to Florida State.

Once again, I apologize if this page loads slow for you as there are a total of 16 animated gifs that I have provided for you to look at.

The first time that we see Johnson show up in the game is with just over 12 minutes left in the first quarter. He’s playing off coverage on 2nd and 15 and quarterback Jameis Winston connects with wide receiver Rashad Greene for 12 yards underneath on a out route. To Johnson’s credit, he does close very quickly on the throw and instantly wraps up for the tackle.

The next time we really see Johnson is on an end around play with Winston leading the way. Johnson looks like he wants no part of the big quarterback, but at least he forces the runner back inside to help.

Johnson would go on to give up an 18-yard touchdown reception to wide receiver Kelvin Benjamin in the end zone on a post route a few possessions later. It’s a good throw and catch and Johnson never really had a shot. What you don’t see in these two gifs below is Johnson getting up mad after the play was over as he was apparently expecting help from the safety in the form of a deeper drop in the middle of the field. The safety, however, was fooled on the play by Winston.

On this next play, Johnson was flagged for pass interference on tight end Nick O’Leary. It’s a zone coverage and while Johnson is a bit late trailing the tight end, he makes up ground quickly and the ball hits him in the back. This was a bad call against Johnson as well and you will see that O’Leary actually pushes off on the play.

Johnson was tested again with just underneath 5 minutes left in the first half. On this out route to Greene, Johnson breaks on the ball and registers a break-up. While it’s a good play on Johnson’s part, I think Winston should’ve gotten this ball out a bit quicker and to the outside of Greene to boot.

Johnson gave up another reception to Greene late in the second half. You can see that he is playing off coverage again on this play and he flips his hips when Greene fakes inside before breaking out. It’s an easy pitch and catch good for 10 yards.

A few plays later, Johnson was flagged for pass interference on Greene on a post route in the end zone.

Johnson quickly put that call behind him and answered the bell on the next play as he broke up a pass intended for Greene on in in-breaking route from off coverage. He maintained good depth on the play and exhibited a strong click and close in addition to the jarring hit.

Two plays later, Johnson also smartly covers a releasing tight end who is breaking for the corner of the end zone off of play-action.

At the start of the second half, Johnson manages to get in an arm in on the tackle of running back Karlos Williams, who had caught a dump-off pass out of the backfield. He had to fight off a tight end who was leading the way on the play.

On this next play, Johnson struggles to get off of a block being made by wide receiver Christian Green, who was listed at 6-2, 204-pounds. Johnson only manages to get his left arm out to touch Williams as he goes by on his way to gaining 15 yards on the pitch-out.

The last play that Johnson really had a hand in during the game came with just over 7 minutes left in regulation. This time he nearly breaks up a pass intended to the seldom used tight end Shayne Broxsie, who only caught two passes during his college career. It was that kind of day for Wake Forest, who lost 59-3.

I think you will agree that that this was just a so-so game for Johnson and certainly not as good as the one he would wind up playing against Florida State last season.

I am willing to break down another one of his games for you, so let me know in the comments which contest you would like me to attempt to track down.