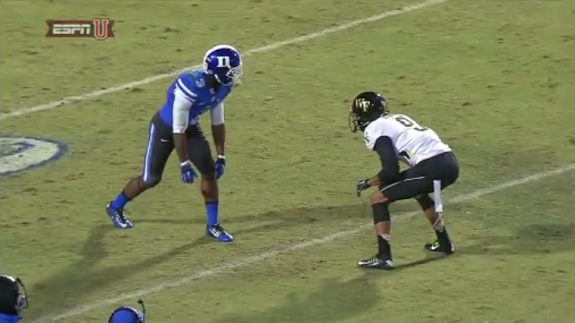 I have been taking an in-depth look at Wake Forest cornerback Kevin Johnson over the course of the last week being as there’s a good possibility the Pittsburgh Steelers will draft him in the first round of the 2015 NFL Draft.

Today, we will look at Johnson’s performance last season against Duke. I chose this game because of the fact that Duke wide receiver Jamison Crowder caught eight passes in the contest for 102 yards and a touchdown, and I wanted to see just how many of those came against Johnson.

The first play in this game that included Johnson is very hard to see and there was no replay for me to show. Johnson is at the top of the screen and he defends the inside curl route. It looks like this pass may have actually been dropped by Duke wide receiver Issac Blakeney, who measured in at his Pro Day at 6043, 223-pounds. The official stats did not credit Johnson with a pass breakup on the play.

The next time that Johnson is a factor in this game is late in the first quarter and on this play, he misses making the tackle on Blakeney and it results in the wide receiver gaining an additional five yards. I have two shots of that play for you to watch.

On this next play late in the first quarter, Johnson is playing off of Crowder and while the quick pass is completed, you can see how quickly the young cornerback closes on the ball and the man.

On this next double-reverse to Johnson’s side, Duke tackle Takoby Cofield easily takes care of the cornerback down the field.

Duke finally tries to test Johnson deep with a pass intended for Crowder but the cornerback plays it perfectly as he stays in phase and cuts off the angle. Crowder has no shot at catching this pass.

While Johnson looks like he might not want anything to do with the running back on this next play, at least he forces him back inside to help and an eventual strip.

On this quick slant to Blakeney, Johnson fails to make the tackle after the catch and it results in the receiver gaining an additional 10 yards.

The last time we really see Johnson involved in this game is with just over five minutes left in the fourth quarter. This time on the quick screen to Crowder, Johnson again fails to make the tackle and it results in a gain of 25 or so additional yards.

This was really just a so-so game for Johnson and it really highlights his tackling problems more than anything else. For the most part, Duke chose to stay away from Johnson in the passing game.