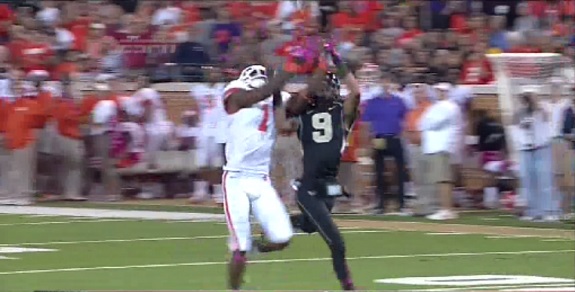 We’ve already broken down the play of Wake Forest cornerback Kevin Johnson in 2013 and 2014 games against Florida State and today we will jump back one more year to see how he fared in 2012 against Clemson, who at the time had wide receivers DeAndre Hopkins, Sammie Watkins and Martavis Bryant. I think you will recognize those names.

There are a lot of animated gifs included in this post so I apologize once again in advance if causes the page to load slower than normal.

Johnson showed up very early in this game and his first real action included him sniffing out a running back screen to his side of the field for no gain. During the broadcast, the announcers said that Johnson weighed 170 pounds and it certainly looks like. This is good recognition on his part.

On this out route, Johnson again comes up to make the stop after dropping into a zone, but unfortunately he loses his feet on his way to make the tackle.

On this pass play deep to Johnson’s side, Watkins has a step or more on the young cornerback and this should have been a completion had quarterback Tajh Boyd dropped the pass in the bucket a little better.

On this curl route to Watkins, Johnson does a great job of breaking back on the ball as soon as soon as the receiver sinks his hips to break back. Johnson, however, makes an attempt on the ball and being as he is tick late, he misses and Watkins escapes for a long touchdown.

On this end-around play, Johnson comes up and gets just enough of the receivers legs to make the tackle for a minimal gain.

On this deep pass to Bryant, Johnson is able to run stride for stride with the speedster and he nearly makes an interception. Look at the size and build difference between these two.

On this run-pass option play, Johnson again shows that his willing to come up to play the run. He even manages to jar the ball loose at the end of the ball, but it winds up going out of bounds.

I cant remember if this is Watkins or Hopkins that catches this pass from Boyd, but Johnson arrives just a hair too late to break up the pass. He doesn’t allow any YAC, however.

Johnson may have been a little late on the last underneath throw, but he’s right on time for this one as he registers a breakup.

Early in the fourth quarter with Clemson leading by a ton, Johnson is still  battling and he shows it on this play by coming up and making the stop on a wide receiver screen to his side.

In this last play, you can see Johnson again show the ability to stop on a dime and break forward against the curl route. He gets there right when the ball does and breaks up the reception.

As you can see, Johnson had a very solid game against the three Clemson wide receivers, outside of the miss that led to the long Watkins touchdown. He was credited with four pass breakups in the game, but I only have him down for three.

Johnson registered 57 tackles (33 solos) in 2012 to go along with an assisted sack and 3.5 stops for losses. He also intercepted three passes that season and deflected fifteen others, according to stats sent to me by my scouting buddy Dave-Te Thomas.

Next up, I plan on breaking Johnson’s 2014 game against Duke if I can find a good copy of that game. Thanks for reading.