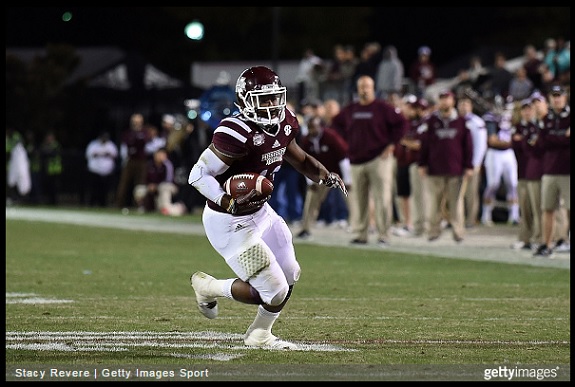 Although standing only 5-foot-8, Mississippi State’s Josh Robinson is not small by any means, and his compact, low-to-the-ground build will remind many of the bowling ball running style of now retired running back Maurice Jones-Drew. However what he lacks in size, he more than makes up for with his heart and determination, both traits he was instilled with at an early age from his grandmother Gwendolyn Robinson. She was always at his games, regardless of the sport, and her cheers for Josh would roar through the bleachers.

“She was my biggest fan,” Robinson said, according to Edward Aschoff of ESPN.com. “She was the figure I needed to look up to.”

A devoted Christian, she taught Josh how to be a gentlemen, addressing everyone with “sir” and “ma’am” and giving him an upbringing filled with the proper values. However, while getting ready for church one morning, she passed away in the kitchen after suffering a heart attack, leaving behind Josh and his two younger sisters.

“When she died, he had nothing,” said Tammy Crain, Robinson’s former baseball coach. He would often stay with family or friends, and even slept in an old Nissan Maxima he bought in high school after saving up for it.  A prideful and stubborn kid, he would never tell anyone about the nights he’d spend in the car. “I made the best out of it,” he said. “I had to.”

A close friend of the Crains, especially their son, Johnny Crain III, Josh would often have a plate full of food at their table. Before his grandmother passed, she asked Tammy’s husband, Johnny Crain Jr., to keep an eye on Josh and keep him out of trouble.

After losing a year of high school eligibility for playing varsity as an eighth grader, his academics became the focal point, and he transferred to Franklinton High School, where after much hard work, even in his summers, he graduated and found himself at Mississippi State.

In high school, he was a bowling ball force with the football, smashing opponents while showing off the speed to dash right by them as well. He led Franklinton to it’s first ever state title in 2010, a game where he broke his arm and still tried to return to play in. His former principal at Franklinton, Lisa Tanner, helped his recruiting process, having been close friends with some of the assistants at MSU.

“He’s a kid with a good heart who hasn’t let his circumstances dictate his outcome,” Mississippi State running backs coach Greg Knox said. “He has no fear.”

After ranking third in school history with 1,203 yards rushing this past season, Robinson showed where he draws his motivation from, wearing a t-shirt honoring his grandmother under his uniform for every game. He has the number 23 tattooed proudly on his chest, marking the darkest hour of his life on that May 23, 2004 day when his grandmother passed. It also shows significance as it was the date of his first 100-yard rushing game on November 23, 2013 when he put up 101 yards versus Arkansas. He also plans to one day soon wear the number 23 for the NFL team that drafts him, and aside from the newly signed DeAngelo Williams and Dri Archer, Robinson could another power dynamic to the Pittsburgh Steelers’ ground game, using his compact frame to bowl defenders over. At 217 pounds, he brings to mind a poor man’s MJD, perhaps more in the mold of a Mike Tolbert, where’s he’s not going to simply turn on the jets and outrun everything at the NFL level, as evidenced by his 4.65 40 time at the school’s pro day. But in a change-of-pace/complementary role, he could flourish. If he’s available in the later rounds, after the team has settled its deficiencies at other positions, mainly cornerback and outside linebacker, he would make a nice selection for the running back stable.  And with a story like his, he should have everyone rooting for him to succeed.

“The sky’s the limit,” he said. “I’m just trying to be better than I was yesterday.”