We’ll break down the first – and as of this writing, the only – free agent signing the Pittsburgh Steelers have made in the 2015 offseason. We’ll evaluate running back DeAngelo Williams similar to the way we did to LeGarrette Blount last year. Only this time, hopefully with a more fulfilling end result.

Studied four games of Williams from 2014. Like last year, we’ll examine each of his plays in a couple different categories. Runs between the tackles, runs outside the tackles, pass protections, routes, and as a pre-snap category, the occasional time he was split out wide. There were some plays, like FB dives or QB sneaks, that don’t fall into any category. Why the total snaps and “actions” don’t always match up.

In chronological order, my evaluation.

He got the majority of the work to start the year, Jonathan Stewart had nine carries and Mike Tolbert with seven, but did not play in short-yardage situations. Those jobs unsurprisingly went to the 245 pound Tolbert.

Because of the general “freshness” each player has early in the year and no injuries working against him, it was obviously the game in which Williams’ looked the most explosive.

Stud defensive tackle Gerald McCoy busts through the line but Williams is able to run through and into the second level. 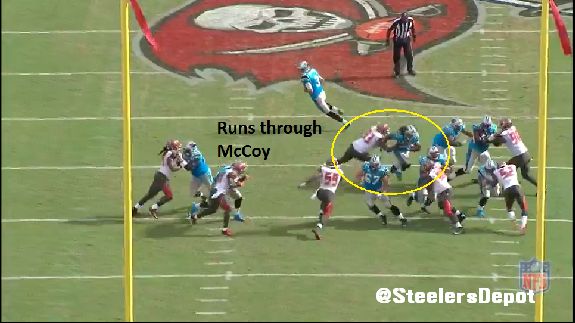 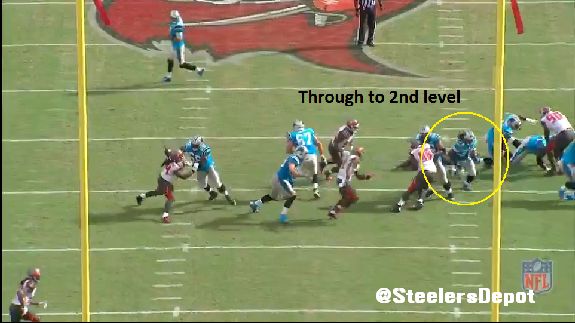 Got an early look at him in pass protection. Does turn his body a little more than you’d like, ideally, but then again, it is him going up against a defensive end. But willing to stay tall and not cut like some other backs. Sometimes, it’s not about looking pretty in pass protection. Just slowing him up. 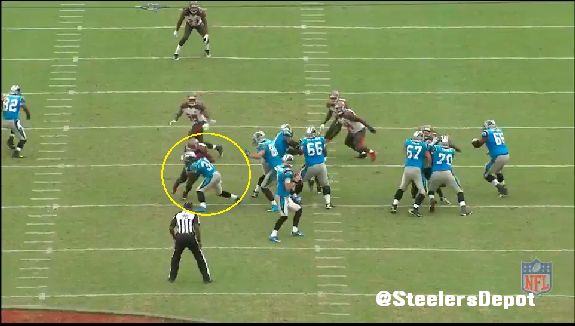 You could see some of that early-season burst that went away later in the year as he fought through injuries. Watch him run away from the backside linebacker en route to a nice gain.

After missing the next two weeks with a thigh injury, Williams started this one. Got a couple of great opportunities in pass protection and overall, he responded positively.

Watch this chip as the linebackers attempt to stunt. Williams is able to knock them both off balance, screwing up the timing and essentially doing the lineman’s jobs.

Despite being healthy enough to play, he didn’t seem to get many, if any, reps on third down. Panthers were still being careful with him. Tolbert took over those duties.

Thought he did all the little things well. Williams decisively picked his lane and got downhill. Even something like flowing into the flats as your quarterback is scrambling. Benefits having a veteran give you. Examples of both below.

Sees Daryl Smith flow down a gap so he cuts upfield. 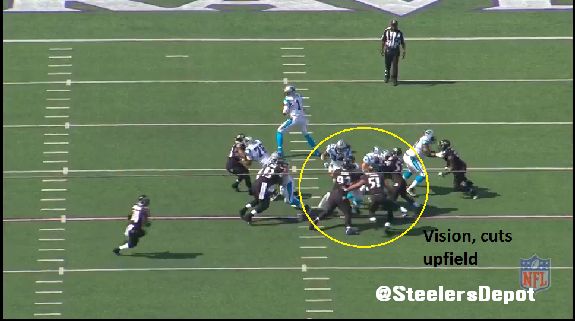 Same play in GIF form. Pay attention to Smith and watch Williams make his cut based off where the linebacker is going. Bounces to the edge but again, that’s following the flow of the safety, who also crashes. If the end doesn’t do a nice job shedding, it’s a big gain.

And Williams turning and running with Cam Newton. 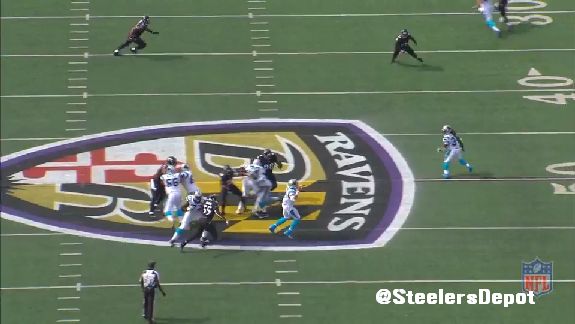 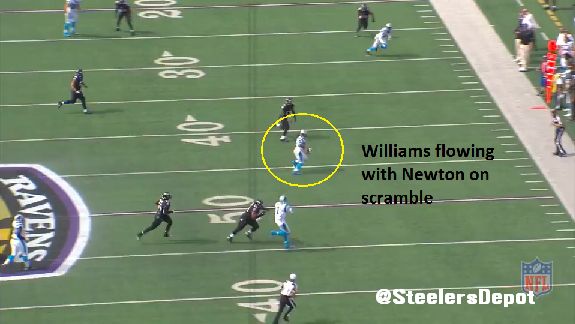 The notion of him running behind a sub-par offensive line can be backed up in the next duo of pictures. Haloti Ngata is originally doubled backside but both lineman fall off, assuming the other has responsibility, and Ngata comes in free to make the stop. 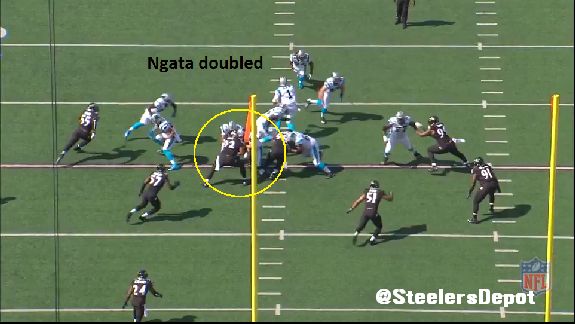 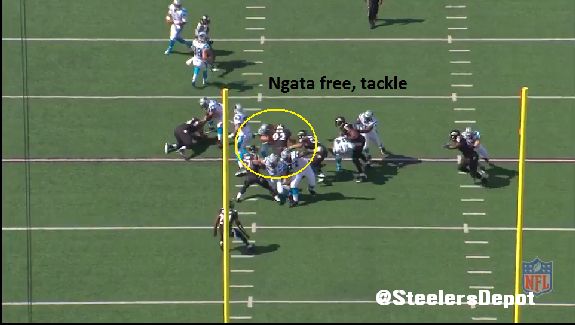 Early in the second quarter, on his best run of the day in which he broke two tackles, Williams pulled up lame and hobbled out of bounds. He wouldn’t return and ultimately missed another four weeks with a sprained ankle.

Williams started the game inauspiciously, fumbling the ball away on the second play of the game. The Eagles would cash in with a field goal.

Again, Williams looked good in pass protection. Stoned Mychal Kendricks once late in the first quarter. Excellent job of staying square to and absorbing the rush.

In the rematch, the linebacker beat him on a swim, ultimately sacking Cam Newton. But I’d expect the linebacker to win in the open field on his second crack at it. 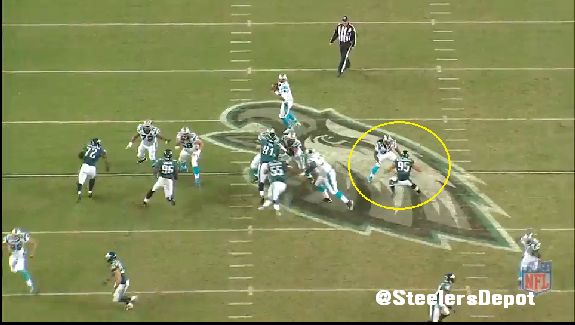 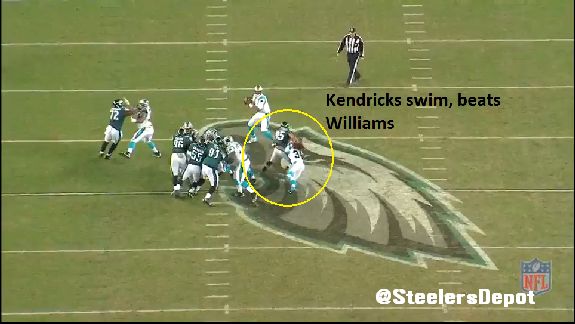 He got the work on the majority of passing downs, even coming in on third down during Jonathan Stewart’s series.

But as a runner, he wasn’t impressive. Got what was blocked but nothing more. Isn’t a YAC threat who is going to run through contact and overall, went down easily.

Williams started but did not play on third downs but it wasn’t because of his hand, which was injured mid-game. Even before the injury, Williams played sparingly and didn’t see a snap on multiple series.

He was far from statistically impressive but I loved his vision. Sees the lane well and has the ability to press the hole, get the linebacker to commit, and cut back inside.

Stretch to the edge but Williams spies Chad Greenway flowing that way. Cuts inside and picks up a respectable gain. 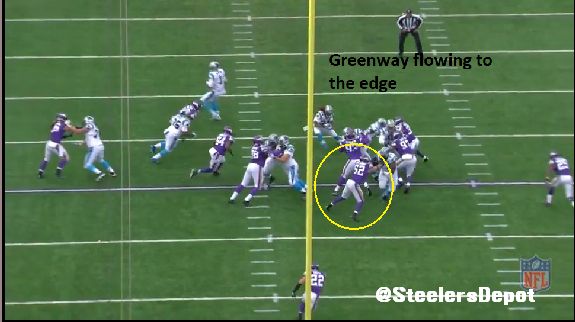 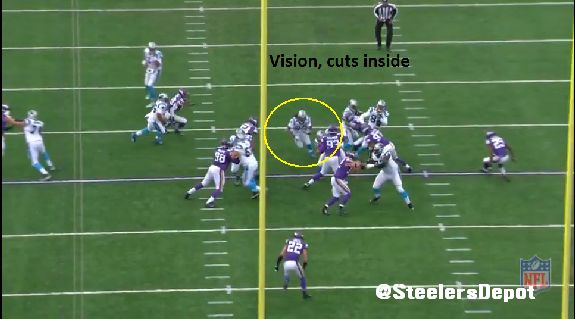 Some short-area quickness to change direction. Plants right to cut left and then changes direction after seeing the uncovered defender. Plunges for a few extra yards. 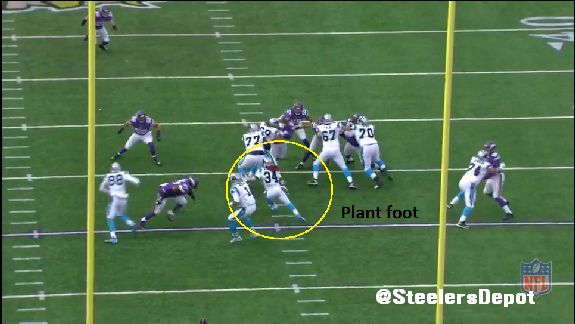 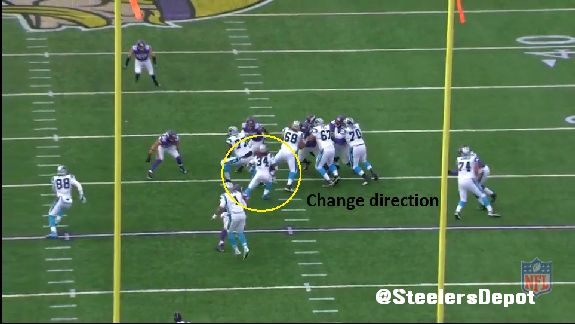 Williams brings all the veteran attributes you’d hope for. His vision might be his greatest asset; he’s able to find the lane and hit it without much wasted movement. Good anticipation and feel for the game, unquestionably aided by years of experience in the league.

It’s hard to gauge how much “juice” is left because of all the injuries and it’s fair to say what he showed Week One is a little more reflective of what we’ll see in 2015. Still, he lacks the speed to win the edge and he is not going to bust off any big runs. Not much of a second gear and doesn’t do a good job running through contact.

But he’s steady and consistent and given the Steelers in-flux state last season behind Le’Veon Bell, it’s a comforting and welcome upgrade. Type of guy who I can see churning out a 4.0 YPC behind a better offensive line.

The Panthers ran a power offense that was counter and power based. Some similarities to what he’ll see in Pittsburgh though an emphasis on inside zones. Don’t think Williams will be successful trying to run off the hip of the tight end on outside zone.

His blitz pickup capability is as advertised. Fearless blocker who consistently stays square and has the power to absorb blockers. He wasn’t asked to run any advanced route concepts in Carolina, just chip/releases into the flat, but is a nice piece to the third down offense.

As anyone with a Twitter can tell, Williams is a friendly, interactive presence on social media. Isn’t the off the field issue Mike Mitchell has been or the on the field problem Blount became.

In a word, Williams creates comfort. Something the team needs a lot more than a supremely talented back.