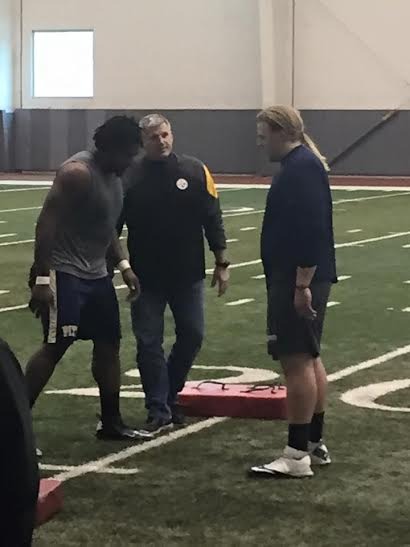 According to a source, the Pittsburgh Steelers held a private workout on March 4th with Pittsburgh Panther offensive lineman Matt Rotheram.

Rotheram, a 40 game starter for the Panthers, originally met with the team during his Pro Day on March 3rd. He has 27 career starts at right guard and 13 at right tackle but spent all of last year at guard. Rotheram was voted a second-team All-ACC lineman in 2014.

Rotheram is the second Panthers’ offensive lineman to be brought in for a workout. Potential first rounder T.J. Clemmings was brought in on the same day. Since they are considered local visits, neither workout counts against the team’s 30.

Above is a picture taken at Pitt’s Pro Day. Rotheram is on the right with offensive line coach Mike Munchak standing in the background.