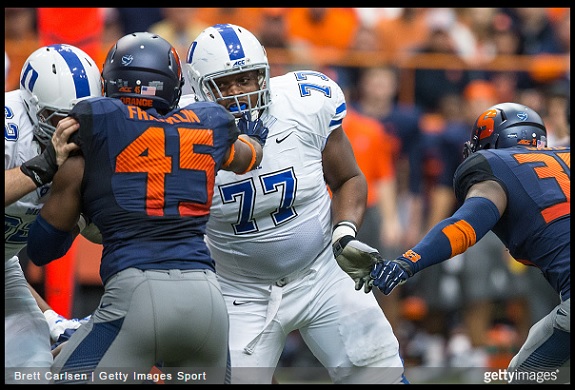 The Duke Pro Day is taking place on Wednesday and according to Jonathan Jones of the Charlotte Observer, Pittsburgh Steelers offensive assistant Shaun Sarrett is present for the event and likely there to check out guard Laken Tomlinson.

Tomlinson, who started every game during his four-year college career, measured in at 6’3″, 323 pounds at the 2015 NFL Scouting Combine. He did 25 reps on the bench while in Indianapolis to go along with a 5.33 second 40-yard-dash time.

Tomlinson was born in Jamaica and moved to Chicago when he was in eighth grade. After initially being redshirted as a true freshman at Duke in 2010, then started every game the next four seasons.

Tomlinson is not viewed as being an overly athletic guard that can consistently get to the second level and pull. Mike Mayock of the NFL Network currently has him as his third-best interior in the 2015 NFL Draft behind Brandon Scherff and Cameron Erving.

Tomlinson will more than likely hear his name called in the second or third round of the draft.