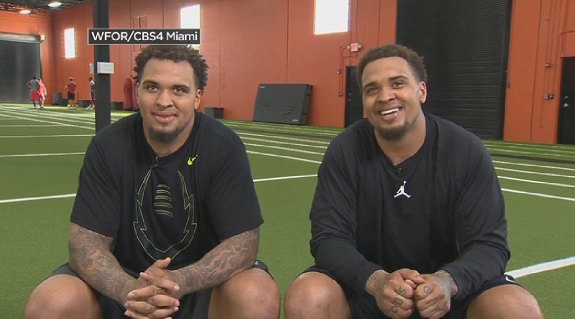 It seems that yesterday was the time for the Pouncey twins, Pittsburgh Steelers center Maurkice Pouncey and Miami Dolphins center Mike Pouncey, to stir up controversy, which has become an annual offseason tradition. But the controversy appears to be much more in the manner in which the message was received than in its delivery.

The Pouncey brothers recently gave an interview with CBS Miami, and were asked a variety of questions. According to media reports, the twins were deriding former Steelers and Dolphins wide receiver Mike Wallace, who has been the teammate of both brothers.

But is that actually what happened? Technically, no. The remarks provided by Maurkice that initiated this story were, as both Wallace and Pouncey later stated, in response to a general question, as revealed in the video provided by CBS Miami.

The question that the reporter asked is the following, verbatim: “In general, with both of you guys, I’m not going to name names here, but whether you got sat down or you quit on the team, how does a guy sit on the sideline and just watch that happen?”. Below was Maurkice’s response, in part:

First of all, in my opinion, he’s a coward. I never want a guy on my team like that to walk out on your band of brothers. Forget the things that don’t happen in the game. Say, you don’t get the ball a lot, or you mess up and they pull you out. Forget all that. It’s about playing for your brothers.

It is possible, perhaps likely, that the interviewer was deliberately alluding to Wallace and the last few months of his tenure with the Dolphins organization, which led to him being traded last week to Minnesota for a fifth-round draft pick. But to make the assumption that Maurkice, who jumped in to answer the question, was referring to Wallace specifically in his response would be unsupportable.

Perhaps he was alluding to Wallace specifically, at least in part, even if they had not been teammates for the past two seasons. It seems more likely, however, that he was referring to former Steelers running back LeGarrette Blount, if anybody, who was released mid-season in 2014 after walking off the field and leaving the stadium after not receiving playing time in a game.

After the Steelers released Blount soon after the incident, Maurkice expressed the strongest opinion when asked about the move, essentially describing the running back’s presence on the team as cancerous. That, to me, seems to be a more likely point of reference, if there was a specific target in mind.

For his part, Mike did seem to acknowledge directly that the interviewer was referencing the end of Wallace’s tenure in Miami. His response indicated a similar, but far more reserved, support for his organization’s decision to part ways with the player, saying that “I think it was the right move for everybody, because at the end of the day, if everyone is not on the same page, you’re not going to win football games”.

And is there anything wrong with stating that? I certainly don’t think so. He was supporting his organization by endorsing their roster moves. Is there any issue between the Pouncey brothers and Wallace? To be quite honest, I don’t care, nor do I think it matters.