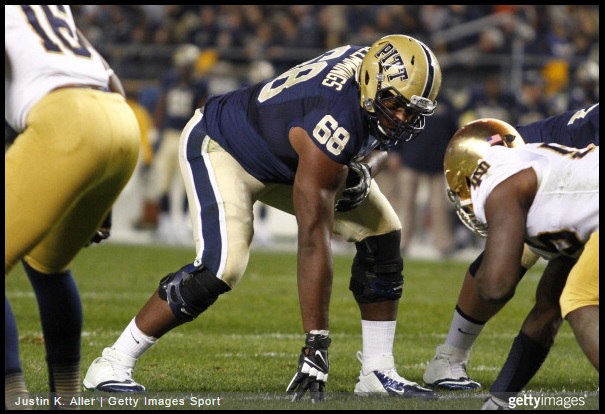 The Pittsburgh Steelers certainly have always had a nose for finding homegrown talent, and this year one of the top prospects happens to lie right in their very own backyard. Being as they share Heinz Field with the University of Pittsburgh football team, they’re certainly no strangers to offensive tackle T.J. Clemmings.

The native of Teaneck, N.J., Clemmings had always watched the NFL draft process as a youngster, but never really thought it would one day be staring him face-to-face as a reality.

“You watch and you’re like, “I wish that was me,” he said. “And then you never really think that maybe one day you’ll get there. Now I’m right in the middle of it, man. Two more months until we find out.”

Despite playing only two years of high school football, Clemmings earned the status as the top-ranked player in the state-as a defensive end. This is where he began his career at Pitt, until ultimately losing his job. He then switched to the offensive side of the ball, carving his niche as the team’s starting right tackle in 2013.

“I wasn’t producing the way my coaches needed me to on the defensive side of the ball,” he said. “The opportunities that my coach brought to me as far as playing offensive line, it felt right at the time to make the move.”

After the 2014 season, Clemmings began putting himself squarely on the NFL radar as a top prospect. He was named a second team All-American by the Football Writers Association of America, and also took home first-team All-ACC honors as well. The 6-foot-5, 309-pounder has a lean build, with great foot quickness and knee bend. His quick feet can be correlated to his time on the hardwood in his high school days. He does possess a mean streak, and will bully blockers at times, always staying on his block through the whistle. However, he is still fairly new to the position, and although a potential switch to the left side is very likely, Clemmings will be the first to tell you he’s still a bit raw.

“Everybody says I’m still raw, and I guess that’s a fair assessment of me,” he said. “You can look at it as a bad thing. Me? I’m looking at it as a positive thing. I’ve only had one offensive line coach, so the next coach that I get will be able to teach me exactly what they want me to do and how exactly they want me to play the position for their team. It’s a fresh slate really.”

An invite to the Senior Bowl, he said the pressure was sky-high and his plate was on overload. But, with the struggles came a learning experience, and it’s something he hopes to build upon and correct.

At the NFL Combine, Clemmings ran a 5.14 in the 40, a very good time for a man of his size. However, his mark of 32-and-a-half inches in the vertical jump and 4.54 seconds were both combine-bests for the offensive linemen.

“A lot of those numbers, like the 32½-inch vertical leap and the 4.54-second 20-yard shuttle, I expected to get because I was hitting those numbers while I was training,” he said.  “I don’t think I need to do anything over. I’m going to stick to the offensive line drills at my pro day March 3.”

And coincidentally enough, who else was on-hand at that pro day but a boatload of Steelers coaches, most notably offensive line coach Mike Munchak, who put Clemmings through a series of drills. It’s also noteworthy that Clemmings met with the team Wednesday as well.

Whether or not the team opts to go offensive line early remains to be seen, as we’ve beaten the dead horse enough that the team’s biggest needs lie in the secondary and at outside linebacker. But with potentially all the top-flight edge rushers gone by pick 22, a local product like Clemmings with potential Pro-Bowl ability as a left tackle would sure seem to fit the bill.

“Where I fit in the NFL depends who you ask,” he said. “I’ve played right tackle. I know I have the ability to play left tackle as well. I’m preparing myself to play both. Any team that drafts me is getting a guy who’s coachable and who wants to be coached up and can be coached up and wants to learn.”

Under the guidance of a coach like Munchak would certainly be a great asset for an inexperienced player like Clemmings, but for right now he’s just taking the whole draft process in.

“Sometimes, I wake up and it’s like, “Man, you’re really that much closer to becoming an NFL player,” he said. “I try not to put too much on my plate and get myself all worked up and overwhelmed. That’s how I’m really going through this process — just enjoying it. Make sure I soak up every little thing about it, because once it’s over, man, it’s over. I’m learning to be happy and enjoy where I am and each day that’s ahead of me.”

Depending on how the cards fall on draft night, where he is now may be exactly where he is then, and the near future, and that’s in Pittsburgh.