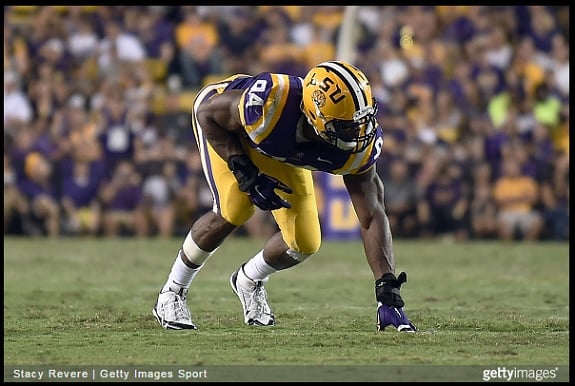 For those of you who play the beloved video game NFL Madden, the create-a-player option gives a chance to build the fastest, strongest player possible, with cat-like quickness and stamina for days. When former LSU defensive end Danielle Hunter walks into a room, he looks like just that, something created in a video game.

Standing nearly 6-foot-6 and weighing 252 pounds, Hunter has a physique seemingly chiseled from marble, with 4 percent body fat and arms with veins bulging out like a roadmap, with little interstates running up them. He’s a man who prides himself on being healthy, as evidenced by his high protein diet. He’s so maniacal about it, even his teammates joke with him about it, making fun of him for the occasional fried chicken meal after a late practice. He blames it on his mother, who’s Jamaican.

“She orders yams and carrot juice and all kinds of stuff like that, stuff you’ve never heard of,” Hunter said.  “It carried over when I came to college. I cook jerk chicken, rice and peas, curry goat, stuff like that, traditional Jamaican stuff. Every now and then I get Canes or Burger King or something like that.”

Against Auburn this past season, Hunter had seven solo tackles, the most since 2004 by an LSU defensive lineman when Tigers’ alum and former Dallas Cowboy/Baltimore Raven Marcus Spears did it.

“If you see this guy’s arms, he automatically makes “Freak of the Week,” Spears said, after selecting Hunter to the weekly recognition on an ESPN Gameday telecast in October.

Never much of a talker, Hunter barely says a word, but when he does, people listen.

“When he laughs, you know you said something pretty funny because he doesn’t laugh that much,” said LSU offensive lineman Vadal Alexander. “When you tell everybody about your joke, you say ‘even Danielle laughed.'”

On the field, Hunter has a motor that runs hot all day long, and it’s unusual at the end of a play to not see him somewhere near the pile. Last season, his second as a starter, the junior recorded 73 tackles and 13 tackles for loss to lead the team. His sack numbers are slim though, having only recorded 1 and-a-half on the season and 4 and-a-half in his career. Possessing a build like former LSU star and current Cleveland Browns linebacker Barkevious Mingo, he is without a doubt a very raw player who will need some fine tuning around the edges. He oftentimes looks as if he relies solely on his physical gifts instead of technique and skill, and sometimes looks lost, like he’s over-analyzing the play instead of read and reacting.

It remains to be seen if the Pittsburgh Steelers will sign an outside linebacker in free agency, but if they don’t, and decide to go cornerback in round 1, Hunter would be an enticing pick come round 2. Why? Look at his performance at the NFL Combine. Hunter opened eyes with his blazing 4.57 in the 40, tops for all defensive linemen and equally impressive for a man of his size. He also put up 25 reps of 225 on the bench press, another impressive number considering the length of his arms. Such numbers compare nicely to another freak of nature who went first overall in the 2014 NFL Draft, Jadeveon Clowney. Often called “lazy” and “lacking heart”, Clowney put up similar numbers at last year’s combine, with a 4.53 in the 40 and 21 reps on the bench.

It’ll be interesting to see what other measurables Hunter will put up at LSU’s pro day on March 27, but if the freakish numbers continue, Hunter may vault himself to very late first, early second round consideration. You can’t teach size or speed, both of which Hunter is oozing with, capable of overpowering a tackle but fast enough to chase down a running back or receiver. Couple his talent and measurables with his energy level and Keith Butler could have his hands on a special player with the right coaching and tutelage from outside linebackers coach Joey Porter, as Hunter reminds of a long Aldon Smith-type of 3-4 edge rusher.

“If he walked into your living room, your eyes would pop out of your head,” said a former LSU coach. “He looks that good on the hoof. He’s going to blow up the combine, and then ace all of the interviews and NFL teams are going to fall in love with him. He still needs someone to unlock all that talent, though.”

NFL Network’s Mike Mayock once said regarding two draft prospects, Iowa’s Mitch King and Georgia Tech’s (now Tampa Bay Buccaneers) Michael Johnson, that if you transplanted King’s heart and hustle into Johnson’s body, you’d have a Hall Of Fame player. I’m not saying that’s at all the case with Hunter, because he’s far from a finished product. But the ceiling for him is unlimited, and the proper coaching in Pittsburgh could finally unlock all that potential.