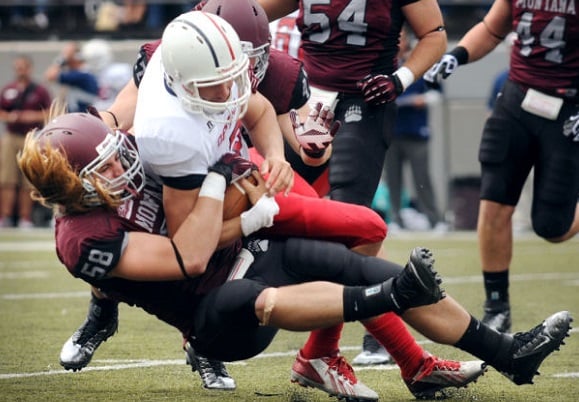 The University of Montana Grizzlies football program has long been one of the most successful programs in all of college football. Formerly a Division I-AA power, now known as the Football Championship Subdivision, their success routinely leads them to Big Sky Conference titles and playoff appearances. Miami Dolphins’ linebacker Jordan Tripp and ex-Atlanta Falcons’ defensive end Kroy Biermann are two of the current “Griz” who are in the NFL, with Biermann’s name often being mentioned as a possible Pittsburgh Steelers’ signing this offseason. But a very intriguing name that should be squarely on their radar leading up to the draft is defensive end Zack Wagenmann. Wagenmann, a three-year starter, is perhaps the school’s most decorated defender ever, as he’s the all time leader in sacks with 37 and-a-half, tackles for loss with 49 and forced fumbles with 11.

The accolades came pouring in after his senior season, including being named to four All-American teams, the Big Sky Conference defensive MVP, and finishing third for the Buck Buchanan Award given to the top defender in the FCS ranks. Prior to the season, he was even bestowed the great honor of wearing the #37, or the “legacy jersey.” The tradition dates back to 1987 when fullback and current Griz defensive coordinator Kraig Paulson wore it, and is passed on only to in-state recruits who best exemplify what it means to play for the Griz. The jersey was once again represented by a native of Lolo,MT. as Tripp passed it on to Wagenmann.

“You pass it on to someone who has those qualities and you know what that entails is  from the community, to the locker room, to the field, to what your teammates see you as,” Tripp said. Wagenmann was humbled, adding ” Just to be in the same conversation as some of the guys who have worn this before me it’s extremely humbling and just an awesome honor.”

Before taking all the hardware home, he had to overcome some difficulties in life, as he was born with a rare disorder called Opalescence, where his intestine was on the outside of his body.

“He came into this world fighting and that’s why I think he was just destined to fight for whatever he wanted,” his mother, Lori Ann Muchmore, said.

That is what endeared him to his teammates and fans alike is his hard-working, “lunch pail” approach, and is something that would be a good fit for a blue collar city and team like the Steelers. It also doesn’t hurt he has a knack for hunting down quarterbacks.

It was once a dream of his to play at Montana, and now another dream of playing big-time professional football is another one staring Wagenmann in the face.

“I just didn’t think that this was a possibility. I just feel so blessed and so thankful that I’ve had the coaches, teammates and everyone along the way placed to help me get to where I am and me to get to that next step.”

Like Troy Polamalu’s overflowing locks, Wagenmann was easy to spot out on the field, with a lion’s mane of long blonde hair that would make even “Sunshine” Ronnie Bass, of Remember the Titans, jealous.

However, the hair is now gone as Wagenmann continues getting ready for his pro day after putting up some impressive numbers at the NFL Combine. At 6-foot-3 and 247 pounds, he showed off his explosiveness with a 37 and-a-half inch vertical jump, ran the 3-cone drill in 7.07 seconds, ran the 20-yard shuttle in 4.26 seconds and the 60-yard shuttle in 12.0 seconds, all tops for the defensive line. However, in the bench press, he only mustered 14 reps, somewhat of a red flag considering the types of blockers he’ll be facing in the league. For comparison, at roughly the same weight, Vic Beasley put up 225 for 35 reps. He ran a 4.82 in the 40 as well, not a horrible number but one he’ll undoubtedly look to improve upon for Montana’s pro day on March 9.

A player can always get stronger, and it’s likely Wagenmann will boost his 40 time at his pro day. The one thing he has shown he can do, and do well, is rush the passer.

Some will argue his stature is too much like current Steelers outside linebacker Jarvis Jones, and connect the dots between the two regarding their strength, or lack thereof. However, other than the bench press, all of Wagenmann’s numbers were far better than those of Jones. Also, Jones was a first round pick, not a probable 4th-5th rounder like Wagenmann. However, the former Griz does have a ton of upside, and perhaps his rookie year in the league would best be spent on a practice squad getting stronger, or maybe as a situational pass rusher.

One thing is certain, and that is the Steelers need help rushing the passer. Most pundits agree, slotting one to them in the first or second round of nearly every mock draft, whether it’s Alvin Dupree in the first, or Nate Orchard in the second. I believe that strategy, but I also believe they will draft one later as well, as a developmental pass rusher who needs some fine tuning. Wagenmann fits the bill in almost every facet, as he’s an explosive, tenacious player coming off the edge, using his hands well to keep offensive linemen off of him. Also, his work ethic is second-to-none, both on and off the field, and his never quit attitude would mesh well with the Steel City and their fanbase.

“If you would have told me a few years ago that I would be in this position today, I would have laughed at your face,” he said.