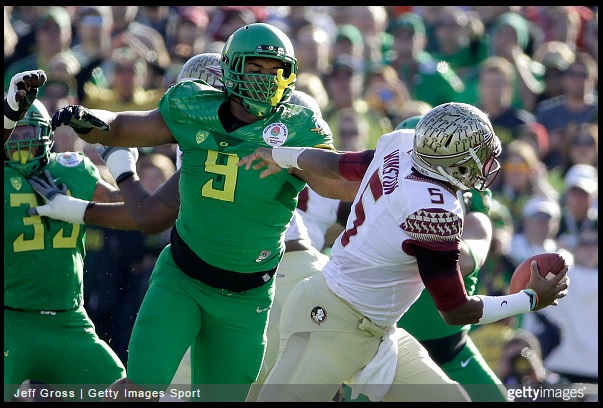 ESPN.com draftnik Todd McShay released the latest version of his mock draft Monday morning and this time around he has a defensive end selected for the Pittsburgh Steelers at 22nd overall.

After previously mocking LSU cornerback Jalen Collins to the Steelers, McShay now has Oregon defensive end Arik Armstead headed to Pittsburgh in the first round of the 2015 NFL Draft.

The Steelers have needs all along their defense, including outside linebacker and cornerback, but Armstead is just a good value pick at this point. I consider him to be an underrated prospect (he’s No. 7 on our board, but the sense I get is he could slip to the second half of the first round) with excellent length, power and violent hands. He’s very good against the run, but his lack of production as a pass-rusher is something of a concern, even though he has all the tools to be a very good one. I’ve also heard some question the consistency of his motor and toughness.

Like most of you, I will be surprised if Armstead ultimately winds up being the selection a month from now. Even if Armstead were the pick, he wouldn’t be able to get on the field much being as Cameron Heyward and Stephon Tuitt will hopefully have both starting defensive end positions locked up for at least the next five years.

What’s interesting is that McShay has the Steelers bypassing outside linebackers Alvin Dupree and Eli Harold in addition to cornerbacks Marcus Peters and Kevin Johnson in order to draft Armstead.

In case you’re curious, McShay now has Collins dropping out of the first round completely.