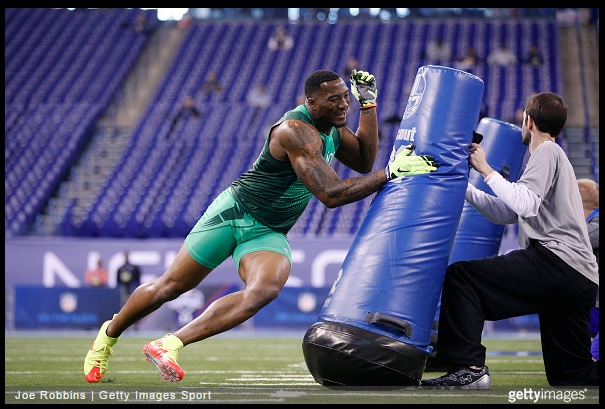 The other day, I gave the backdrop on draft hopeful and potential Steeler Lorenzo Mauldin, who had a very rough upbringing. Today, I will focus on another prospect this year, one who could be very much in play for the Pittsburgh Steelers first round pick in April’s draft. With this draft class littered with potential problem children like Marcus Peters and Dorial Green-Beckham, Eli Harold offers a feel good story, and fits the bill in terms of what the team is looking for, both on and off the field.

A long and muscular player at 6-foot-3 and 247 pounds, Virginia’s Harold already conjures up images of Joey Porter or Jason Gildon, based on the eyeball test. Not only that, he hails from the Virginia Beach area, playing at Ocean Lakes High School. Who else hails from that area? Mike Tomlin. And have they been introduced yet? You better believe it.  Reports have surfaced that the talented pass rusher already met with Tomlin at the scouting combine last weekend. And one of his high school teammates was none other than current Steelers safety Shamarko Thomas, so he already has several ties to the team’s heartstrings.

It wasn’t all good and well growing up for Harold however. His father left early in his life, and his mother, Sheila Korvette Harold, was diagnosed with pancreatic cancer, which took her life when Harold was only 15. He noticed something was up when she’d stop showing up to his football games, although his siblings kept the fact that she was getting worse from him. He admits he watched her take her last breath, moments after playing video games.

“Without football, I think I would’ve lost my mind,” he said, according to Norm Wood of The Daily Press.  “I’ve done whatever I can to keep my mind off it and be the best man and athlete and student I can be. It’s not easy being 17 without any parents, but that’s how I went about it.”

She was only 56, but what she left behind in Eli was a young man who she taught to never settle for a silver medal. He was raised by his older brother Walter, now a pastor who at 44, has five children himself. Heartbreak seems to be a familiar theme for the family, as Walter lost one of his children at only 20 years of age while playing basketball, due to a heart condition. As it often does, tragedy brings family closer together, and Harold even credits Walter with helping him in the entire draft process, like choosing an agent, and even forgoing his senior year for the draft. One of Walter’s sons, Sage, a standout linebacker from James Madison, is also in the draft discussion this year.

Despite multiple offers from programs like Florida, LSU and Ohio State, some as a wide receiver, Harold stayed home and chose the University of Virginia. A major selling point for him was the school’s recruiting pitch of “faith, family and football,” three things that are near and dear to Harold’s heart.  In three seasons, he tallied 17 and-a-half sacks and 2 interceptions from his defensive end spot, the last two years of which he was a starter. He even lined up as a 5-technique at times in the team’s alignment, flashing his versatility, something that should catch Pittsburgh’s eye.

“You talk about him and his background and the hard knocks of life and the hand that he’s been dealt, and his ability to overcome the things that he has and become one of the leaders of his school,” Virginia head football coach Mike London said. “When you meet him, he’s just a fantastic young man. He has a success story just waiting to be written for him.”

He credits everything he’s achieved up to this point to his mother, but he’s not done yet.  He clings to what family he has, and still harbors an ill will towards his father who was never was. A fire burns within him from in college, when he would see teammates and friends with their fathers, yet he does vow to not let the absence of his father dictate who he becomes. An interesting sidenote is that Tomlin harbored the same types of feelings towards his late father, Ed Tomlin, and could be another similarity tying Harold to the organization.

At last Sunday’s combine, Harold dazzled scouts, and improved his draft stock immensely. He ran the 40 in 4.60 seconds, posting a vertical of 35 inches and a broad jump of 10-3, all excellent marks. More notably, he moved swiftly and fluidly in drills, showing an ability to drop into zone coverage, an important trait of the outside linebackers in the Steelers’ 3-4 scheme.

Over the past few years, the proof is in the pudding that a lot of the Steelers’ draft choices are, in fact, players they’ve met prior to the draft. He met, not only with Tomlin or scouts at the combine, but the whole organization. Just yesterday, the NFL Network’s Daniel Jeremiah mocked Harold to the team at 22, citing their needs for an upgrade in the pass rush. At only 21, he has room to grow too. He has previously admitted to having trouble keeping weight on, due to a high metabolism, but played last season at around 250 pounds. He uses his hands very well, exploding out of his stance, and shows an almost “Harrison-like” ability to get low, dip his shoulder and bend the corner when pursuing the passer, which he does with reckless abandon. He also cites his rough childhood as a source of releasing his frustrations with his violent style of play.

Although his ship is finally about to set sail on his NFL dreams, it’s apparent family means the world to Harold, and come April’s draft, he may find a black and gold family welcoming him with wide open arms come pick number 22.

“Always continue to chase your dreams and live your life to the fullest. That’s basically how I see it and how I was taught to see it by my mom,” he said.