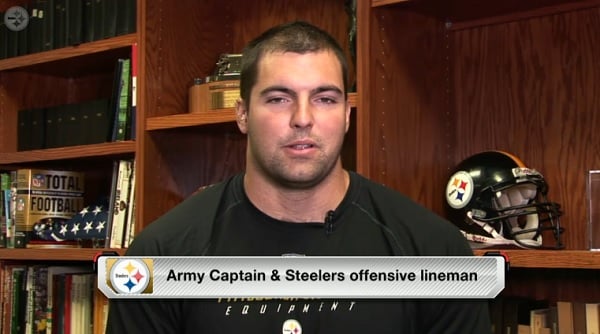 Alejandro Villanueva is about as polarizing a prospect as you’ll be able to find, league-wide. At 6-foot-9 and weighing roughly 315 pounds of lean muscle, he certainly looks the part, and is the type of player most coaches would insist be the first one off the team bus. His background as a former-Army Ranger in Afghanistan and Bronze Star Medal recipient instantly makes him a fan favorite. He certainly has everyone in the Pittsburgh Steelers’ organization pulling for him as well.

A rugby player in his high school days, Villanueva began drawing interest on the gridiron, and the sport was still something new to him. A student of the game, he was coached to play through the whistle, and he did just that in one game when the opponent was in the victory formation. Villanueva leveled their quarterback and was ejected.

His father, Ignacio, was stationed in Mississippi while serving in the Spanish Navy, so you could say serving in the military was in his blood. Villanueva saw the field often during his freshman year at West Point, as a backup defensive end and special teamer. He then made the switch to offensive tackle, eventually landing a starting role his junior year. Ultimately, new head coach Rich Ellerson placed at wide receiver for his senior season in 2009, and he led the team with 522 yards and 5 touchdowns as a monster target on the perimeter. If nothing else, the fact that he’s played a myriad of positions should give some clues to the type of athletic specimen he is. His offensive line coach at West Point, John Tice, even reports having seen Villanueva once walk for 30 yards on his hands. Even at his listed weight at the time of 277 pounds, that is astonishing.

After serving his military requirements as a standout Army ranger overseas, he’s now pursuing his dreams of playing professional football at the highest level. Lacking a trainer or even his own agent, Villanueva paid to attend a regional combine in Georgia, and became one of 240 players invited to another combine in Detroit, where he sat down with scouts from the Philadelphia Eagles.

After being viewed as a potential 3-4 end, he was one of the their final cuts, and Pittsburgh gladly snatched him up last September, and placed him on the practice squad.  One of the first things Villanueva did, even prior to joining Pittsburgh was put on weight, somewhat of a given going from the lifestyle of a soldier to NFL athlete.

“When you’re in the Army, you’re so busy that you barely eat,” Villanueva said. “You forget breakfast sometimes because it’s a commodity and for dinner, you’re usually so tired you only eat a little whereas now I’m getting plenty to eat.”

Viewed as an offensive tackle, Villanueva has arguably the best offensive line guru in the league helping him hone his craft in Mike Munchak. After being signed last offseason, Munchak turned one of the team’s grey areas into an area of strength, and hopes to do the same with Villanueva.

“He’s a great coach, so I enjoy coming in to work,” Villanueva said. “Obviously in the offseason he’ll have some time to develop me and spend more time. I feel confident that I can do it. I’m going to keep working.”

With his massive frame, Munchak hopes to further develop some depth along the trenches, and maybe even design some trick plays for his project player. Built much like the New England Patriots’ athletic tackle, Nate Solder, coupled with his receiving skills, it’s not far off to envision him catching passes near the goal line.

“Catching the football is really fun and that’s what I found out in college, but I think this position is where I belong,” Villanueva said. “I love playing line, especially with the great guys that the Steelers have and coach Mike Munchak. So for me, it’s a great opportunity.”

It’s obvious that Tomlin has a glowing respect for him, even bringing him along on a road trip this past season, something unheard of for practice squad players.

“Just a sign or a token of our appreciation for not only the sacrifice he’s made but all of the men and women in the history of our country,” Tomlin said, as a way of commemorating Veteran’s Day. “Truly a humbling thing and it’s great to have him be a part of us. It makes it personal in terms of understanding that sacrifice.”

If he continues working hard and developing, under the tutelage of Munchak, he could definitely help add quality depth as a swing tackle. Given his adaptability as a jack-of-all-trades type of player, he could add a wrinkle or two to certain packages as well, maybe as a jumbo tight end as previously stated. Munchak has his hands full with this one, but if anyone can harness his abilities and help him morph into a quality NFL tackle, it’s the Hall of Famer.

“He’s a leader,” Tice said. “There are all kinds of leaders in the business world and sports world, but the ultimate leadership has to be leading soldiers in combat. If you can handle that, you can handle anything.” All eyes will be closely watching his development, and hopefully after a full offseason honing his craft, we find out.