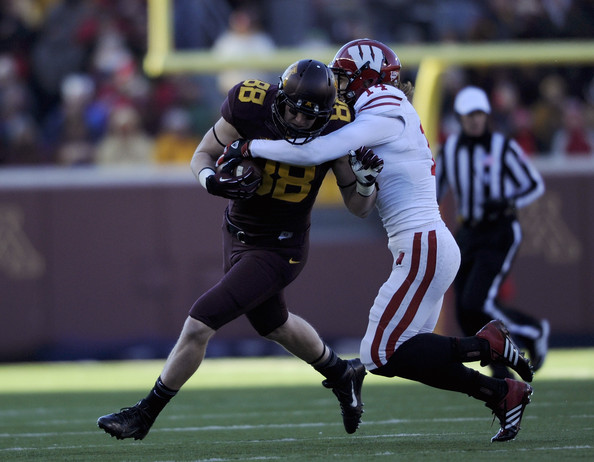 The Pittsburgh Steelers were allowed to officially meet with 60 draft prospects for 15 minutes each last week at the 2015 NFL Scouting Combine and it shouldn’t come as a surprise that one of those players was Minnesota tight end Maxx Williams.

According to Gerry Dulac of the Pittsburgh Post-Gazette, the Steelers met with Williams, who decided to make himself eligible for the draft after catching 36 passes for 569 yards and eight touchdowns as a sophomore last season.

According to Dulac, Williams’ father, Brian Williams, was born and raised in Mt. Lebanon and graduated from high school there in 1985. He was drafted in the first-round of the 1989 NFL Draft by New York Giants and played 11 years in the league.

The younger Williams measured in at the combine last week at just under 6’4″ and he weighed 249 pounds. He reportedly ran 4.78 second 40-yard dash and did 17 reps of 225 pounds on the bench.

Williams is expected to be the first tight end selected in 2015 NFL Draft and is likely to hear his name called either in the latter part of round one or early in the second round.

The Steelers last drafted a tight end in the first round in 2005 when Heath Miller was selected with the 30th overall selection.