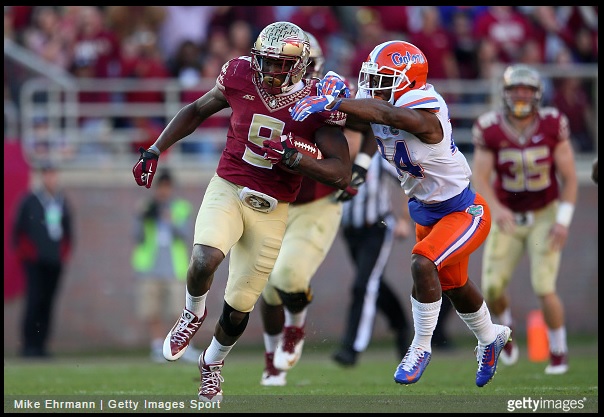 There was Tiki Barber and Ronde Barber. There’s now Eli Manning and Peyton Manning, and Devin McCourty and Jason McCourty. Pairs of NFL brothers aren’t something new to the league. Even a few short years ago, in the 2011 NFL Draft, the Steelers reportedly had some major designs of reuniting Mike Pouncey, a guard/center, with his younger twin brother, Maurkice Pouncey, whom the team took with it’s first round pick the year before. What they got in return was an All-Pro caliber rookie season from their young center, who would blossom into one of, if not the, best centers in football. Mike Tomlin was said to be jubilant at the prospects of teaming the brothers along the offensive line, and was said to have given orders to leaving no stone unturned when it came to realistic trade opportunities to do so. Obviously, it never materialized, but in the upcoming 2015 NFL Draft, another chance to pair siblings could present itself.

With the team’s current crop of backup running backs failing to fit the bill, as seen in the Wild-Card loss, the team will likely place a priority on the position in the mid-to-late rounds of the draft. One name the team will likely already have some information on is Florida State’s Karlos Williams, the brother of Steelers’ linebacker, Vince Williams. A former 5-star safety coming out of high school, he is a true jack-of-all-trades player if there ever was one. He earned his first career start in the 2012 ACC Championship Game-at linebacker. In the biggest game of his career to date, he responded with a career high 11 tackles, and the game-sealing interception, which he returned 41 yards and narrowly missed the touchdown. In 2013, just before the second game of the young season, Williams was once again moved, this time to the offensive side of the ball, as a bruising tailback, and from his very first carry he showed he belonged, recording a 65-yard touchdown run. At 6-foot-1 and 230 pounds, with an angry running style, Williams finished the season with 730 yards and 11 scores, while also notching an astounding 8.0 yards-per-carry average. While losing his starting job to a freshman in 2014, he still managed 689 yards on the ground, and 12 scores overall. While the talent is, and always was apparent with Williams, there exists a few troubling off-field incidents which will make teams wary of him.

Over the last year or so, the Florida State football team has come under much scrutiny, mostly due to multiple allegations of sexual assault and theft, against star quarterback Jameis Winston. However, Williams had his share of run-ins with the law as well. Last June, Williams came up as an associate in a drug deal/robbery case being investigated by the Tallahassee Police Department. The victim cited Williams as his “hook-up” for marijuana, where he would contact Williams, who in-turn, would contact a drug dealer and arrange the meeting. However, Williams was never charged with committing a crime. Then, in October, it was announced that he was being investigated again by the police department on charges of alleged domestic battery against his pregnant ex-girlfriend. Ultimately, the charges were again dropped, as the accuser had her attorney drop the investigation.

“Try to move on, try to move forward and progress in life,” the younger Williams said. “Things are going to happen, and I have to learn to roll with the punches and just keep moving forward.”

As with the Winston case, which was ultimately dropped, the Tallahassee Police Department has been viewed in the public eye as somewhat of a scapegoat, seen as giving preferential treatment to student athletes at FSU.

There are several troubled prospects at this year’s combine, such as Marcus Peters and Dorial Green-Beckham, and perhaps their interviews with team personnel will carry more weight than their combine performances.

“Disappointing to see what he became as a runner this year, ” said an NFC director of scouting. “My grade dropped two full rounds on him and that is before the character stuff. he still has a very high ceiling though and that’s in my report.”

Williams certainly looks the part, with a heavily muscled frame and deceiving speed, but at times can run a bit too upright. He is a taller back, with the same build as Le’Veon Bell, and it’s fair to ponder whether the Steelers would gamble on him. Their recent history of being snakebitten by running backs with troubles, like Chris Rainey or LeGarrette Blount ,says no. But they have a strong locker room to keep Williams in line, as well as a players’ coach who holds everyone accountable in Tomlin. What they also have is something the other franchises sniffing around Williams don’t, in older brother Vince. He’s been nothing short of a model citizen during his first two years in the Steel City, and his reputation as a hard-hitting, run stuffing linebacker who knocks the snot out of people should put the front office at ease, as he’d probably be first in-line to bring the hammer down on Karlos, should be run afoul.

Williams shows starter ability, showing great burst, and his physicality is best exhibited in pass protection, an area Pittsburgh was exposed in the playoff loss. The 170-pound Dri Archer was simply out-muscled, but Williams shows no fear in crushing an opponent. Unlike past backs who too often looked to bounce it outside, like Rashard Mendenhall, Williams isn’t afraid to sledgehammer it between the tackles, and churns his feet upon initial impact.

Williams posted on Twitter this past week about the chilly temperatures in Indianapolis, the site of the combine.

“As I ride on this shuttle bus, I truly do not understand how people live in this kind of weather,” he tweeted.

With subzero temperatures in Pennsylvania right now, Pittsburgh or Green Bay might not be atop his wish list. However, with the possibility of Vince acting as an extension of the coaching staff to keep him in line, coupled with potentially pairing him in the backfield as part of a punishing ground-and-pound attack with Bell, Williams isn’t in a position to pick his next destination.