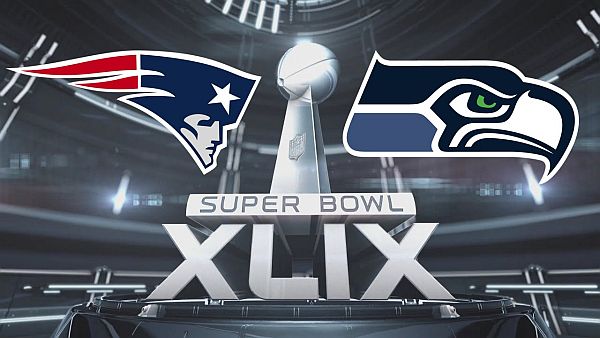 New England Patriots undrafted rookie cornerback Malcolm Butler intercepted a potential game-winning pass intended for Seattle Seahawks wide receiver Ricardo Lockette on the one-yard line with 26 seconds remaining in the fourth quarter to secure a 28-24 win for his team in Super Bowl XLIX at the University of Arizona Stadium in Glendale, AZ.

Instead of giving the ball to running back Marshawn Lynch on second down from the Patriots one yard-line, the Seahawks decided to throw and it cost them the game. Lynch had run for 102 yards and a touchdown on 24 carries in the game.

Patriots quarterback Tom Brady was named Super Bowl MVP for the third time in his career after completing 37-of-50 pass attempts in the game for 328 yards and four touchdowns.

The game was tied at 14 at halftime and the Seahawks quickly jumped out to a 24-14 lead after scoring on their first two possessions of the second half. The Patriots defense, however, held strong on the Seahawks next three possessions as they forced three straight three and outs.

Brady then orchestrated two fourth quarter drives of 68 and 64 yards and put the Patriots ahead for good when he connected with wide receiver Julian Edelman from three yards out with 2:06 left regulation. Edelman caught nine passes for 109 yards in the win.

The Seahawks did not go without a fight as quarterback Russell Wilson drove his offense 79 yards in six plays. The key play on the drive was a fantastic 33-yard juggling catch by wide receiver Jermaine Kearse that set the Seahawks up at the Patriots five-yard line with 1:14 left. After a Seahawks timeout, Lynch rushed four yards to the Patriots one on first down. On the very next play, Wilson surprisingly dropped back to pass and Butler undercut the throw to Lockette to win the game.

Wilson finished the game 12-of-21 passing for 247 yards with two touchdowns and the one interception in the loss.

The Seahawks also got contributions in the game from one of their unknown players as wide receiver Chris Matthews caught four passes for 109 yards and a touchdown. Matthews entered the game with zero career receptions.

The Patriots notched their fourth Lombardi Trophy with the victory.