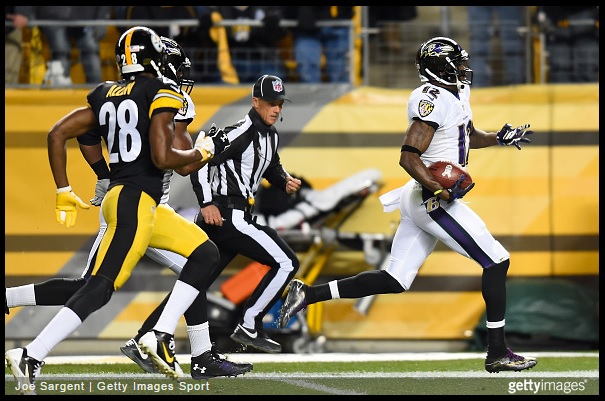 The Baltimore Ravens parted ways with wide receiver Jacoby Jones on Wednesday and now the 30 year-old return specialist is free to sign with another team ahead of free agency. If the Pittsburgh Steelers are smart, they will kick Jones’ tires and look closely at the window sticker.

Jones still has value in the league as return man, who can also function as a No. 4 wide receiver. That’s something the Steelers really could use this offseason being as veterans Lance Moore and Darrius Heyward-Bey are both unlikely to be back in 2015.

While Jones only caught nine passes for 131 yards last season, he did return 30 punts for 275 yards and 32 kickoffs for another 978 yards and a touchdown. Currently, Steelers wide receiver Antonio Brown is set to be the punt returner once again in 2015 and while effective in that role, the team would be wise to find another player to do that job in an effort to prevent more wear and tear on their offensive star.

Last season the Steelers ranked 27th in the league in kickofff return average (21.7) as Markus Wheaton, LeGarrette Blount and rookie Dri Archer only registered 758 yards on 34 returns combined. While Wheaton was the best of the bunch with a 24.7 average per return, Jones’ average of 30.6 per return last season was much better.

As usual, the Steelers won’t be wanting to pay a part-time free agent player like Jones much money, so his asking price and expected playing time might be huge obstacles. In addition to that, the Steelers aren’t likely to be the only team interested in Jones’ services.

Prior to being released by the Ravens, Jones was scheduled to earn $2.5 million in 2015. Will another team now be willing to pay him that much or more? We should find out the answer to that question pretty soon.

It certainly would be nice to use Jones as weapon against the Ravens next season instead of the other way around.

During his time with the Ravens, and including the playoff game last season, Jones has returned 19 kickoffs for 622 yards (32.7) and a touchdown against the Steelers. He also cost Steelers head coach Mike Tomlin $100,000 and a lot of embarrassment in 2013 when it was ruled he was interfered with near the sideline while returning a kickoff 73 yards in the Thanksgiving night meeting between the two teams.