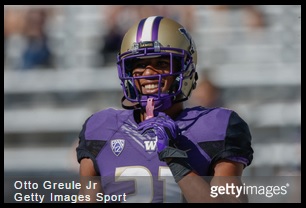 After predicting the Pittsburgh Steelers would select Texas defensive tackle Malcom Brown in his first mock draft of the offseason, ESPN draft analyst Todd McShay now has a cornerback with a questionable character going to the black and gold in his second mock draft of 2015.

McShay has the Steelers drafting Washington cornerback Marcus Peters with the 22nd overall selection and he writes:

Safety and cornerback are need areas for the Steelers this offseason, and linebacker could also quickly become a problem spot, with James Harrison, Jason Worilds and Arthur Moats all free agents. Based purely off of game tape, Peters is the best all-around cornerback in this class. He has a good combination of instincts, cover skills, toughness and ball skills (11 interceptions the past three seasons). But Pittsburgh will have to feel comfortable with his character before drafting him, as he was kicked off of Washington’s football team this fall due to behavioral issues.

The Steelers last selected a cornerback in the first round in 1997 when they drafted Chad Scott. While we can’t totally rule out a cornerback being taken this year in round one, the fact that Peters has some character issues would lead you to believe that general manager Kevin Colbert won’t be willing to take on the risk associated with him. The second round would be a different story, but Peters figures to be long gone by then.