– LSU OT La’el Collins is *only* 305 but I love his makeup. Muscular with a well put together upper body. Broad shoulders. His ten yard splits of 1.86 and 1.81 are awesome. When asked to pull, I thought he showed a lot of explosion out of his stance. And showed what a great athlete he is when moving into the second level.

– Jamil Douglas’ body is a tad sloppy and flabby for 304 pounds. The Arizona State OT doesn’t look as good as he should.

His kickslide drill didn’t help matters as he played on his heels, was out of control, and wound up running into the coach conducting the drill. Biggest collision of the day.

– Oregon’s Jake Fisher looks the part at 6’6/1 306 and just under 34 inch arms. Definitely has the frame to add some weight. His body type is nearly ideal. His 40 times and ten yard splits were near the top of his class. The latter were timed at 1.75 and 1.78.

A smooth player, I would have liked to see him get down the line a bit quicker when pulling. But a minor issue.

But he looked tremendous in the kickslide drill. Perfect base. Knees bent, butt down, and moved quickly laterally. We see it in the screenshot. 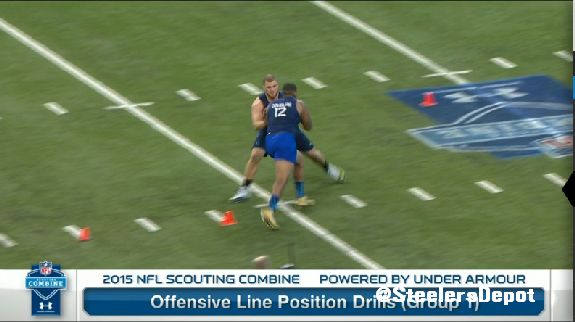 – Brett Boyko out of UNLV is one of the tallest tackles standing in at 6’6/5 but has disappointingly unproportional arms at 32 inches. He was unable to run a straight line in the 40, getting a little out of control, running a slow 5.6 flat because of it.

– Florida has three offensive lineman at the Combine. Tackle Chaz Greene is one of them and he’s built well, weighing in at 314 pounds, over 33 inch arms, and 10 7/8 inch hands.

– Andrus Peat has a monstrous lower half. Massive thighs. According to the broadcasters, the Stanford alum has good bloodlines too with many in his family having a football background.

He had trouble fully opening up during the turn drill, where the tackle is asked to flip his hips while moving backwards, but I suppose that’s understandable from a tackle who usually plays on an angle. Same thing happened in the mirror.

– Iowa’s Brandon Scherff is lean and I would like to see him fill out his frame a little more. Shorter arms but he isn’t T-Rex status and I don’t pay attention to that number very much. Nice ten yard split. Timed at a 1.78.

– Rob Havenstein dropped 11 pounds from the Senior Bowl to the Combine, weighing in at Indy at 321 pounds. Very learn for his 6’7 build. Looks good though I wish his arms had a bit more muscle. 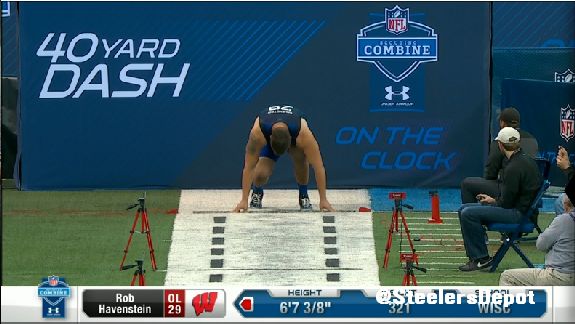 – Oklahoma’s Daryl Williams is long and a good weight at 327. But I wish I saw more muscle in his upper body. He was slow, deliberate, and still out of control when asked to turn in drills. Couldn’t move in a straight line.

– TCU’s Tayo Fabuluje is a massive 6’6/3 353 with 34 1/8 arms but pops up high off the snap in the pulling drill. Probably a phone booth blocker at the next level, as you’d expect based off his build.

– Maryland’s Rob Crisp seemed to overextend and drop his eyes, creating flatback, when attempting to stick after pulling. He didn’t have a good day.

– I trust it won’t be this bad on tape but the U’s Ereck Flowers had an ugly day. His kickslide drill was downright terrible, not getting square to the defender and overextending more than anyone else. It was mechanical and downright terrible to see. He may have been pressing too much. Just want to see your kickslide. There’s no QB to protect. If the “DE,” an offensive lineman,  gets a step, it doesn’t matter. Show me your kickslide –  that’s the point of the drill. 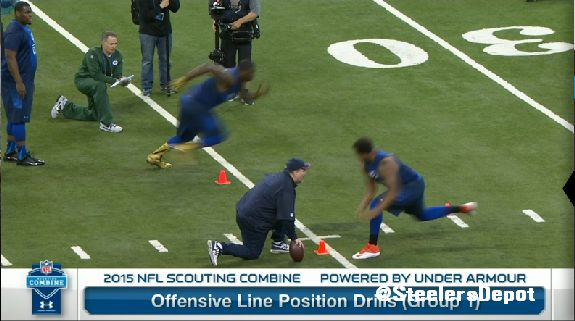 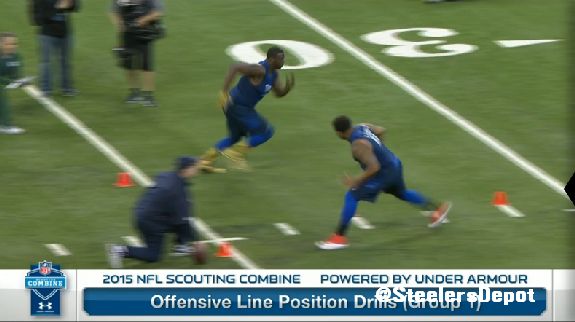 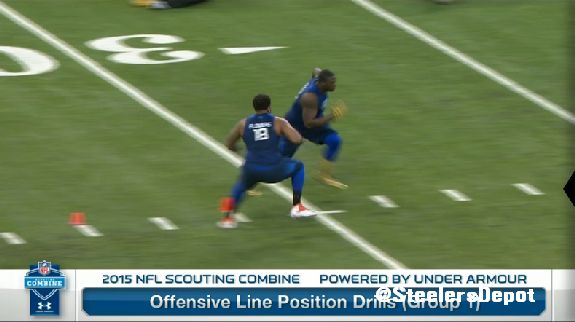 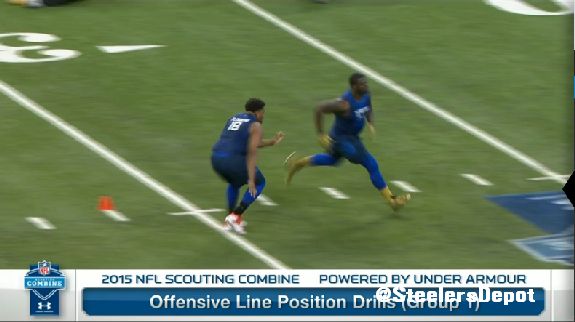 Here he is in his second attempt, not getting his shoulders square to the defender. 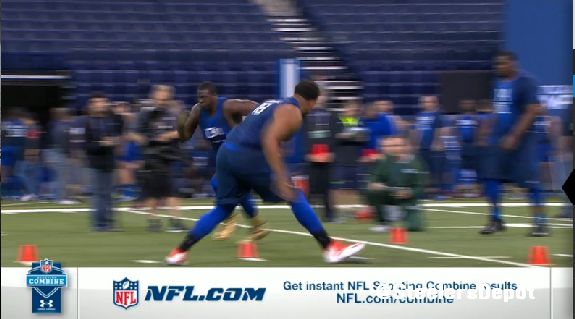 I didn’t get to see much of the mirror drill, the online stream showed just the second group, but in highlights, Flowers struggled to mirror in a straight line. Was all over the defender’s toes.

– Texas A&M’s Jarvis Harrison is an intriguing prospect. Apparently has played all over the line, inside and out. Carries his 330 pound frame well.

– Alabama’s Austin Shepard may have the pedigree but he shows himself to be a limited athlete who will likely need to kick inside at the next level just to stand a chance. Short arms and a poor ten yard split, 1.9 being his best of the two.

He was tall when asked to flip.

– Havenstein, Sean Hickey out of Syracuse, and Ali Marpet out of tiny Hobart all showed clean kickslides. Hickey is someone the Steelers have talked to and he’s currently working out with Tunch Iilkin. Did a onceover on his tape however and didn’t come away impressed.

– Hickey mirrored well in the drill of the same name. Favorite event for the lineman.

– Marpet was one of the stars of the day. Fantastic job in the mirror drill, loads of short-area quickness. Coach running the drill remarked, “Hell of a job, Ali,” after he was done, the only such praise I heard from any of the lineman in that group participating.

– Unfortunately, the broadcast on the stream only showed the extra drills of Group 2, not Group 1.

– Florida’s Trenton Brown is a bit flabby around his midsection but that’s to be expected at 355 pounds, the heaviest player at this year’s combine. He’s also overall this year’s biggest man: 6’8 with 36 inch arms and 10 7/8 hands. A 1.87 ten yard split is very respectable for his size.

– I like parts of Kansas State center’s BJ Finney’s game but he isn’t intimidating getting off the bus. Squatty player with relatively short 32 inch arms.

– Guard and a kid I profiled, coming away impressed, John Miller has a lot of muscle and doesn’t appear to have much bad fat.

Louisville product has quick feet in the mirror drill but moved in a small space, not covering cone to cone. Not really the drills intent.

– Duke’s Laken Tomlinson gets the fanfare but his partner Takoby Cofield held his own. Liked his snap off the ball when pulling. Long arms and big hands. 34 and 10 inches respectively.

– Tennessee State guard Robert Myers is a classic example of why the ten yard splits are  infinitely more important instead of the 40. His 40 time of 5.44 was seventh worst of the lineman who ran it but his ten yard split of 1.78 was tied for the fifth best.

He’s a big-bodied guard with long arms, measuring in at 33 3/4 inches. Need to put on the tape of this guy but he’s drawing some of my interest.

He was all over the line when asked to mirror but you could tell he can move. Not just a big, lumbering body.

– Center Reese Dismukes was all over the place in the kickslide drill but that isn’t a surprise. Probably never did it at Auburn. One of the smallest guys at the Combine at 6’2/6 296 pounds, 32 1/2 arms and 8 7/8 inch hands.

– Center and tackle Cameron Erving did well in the kickslide drill. Explosive initial steps. Like his versatility. Successful career at Florida St.

– Throughout the day, Miami (FL) guard Jon Feliciano lunged. Be it drive blocking or lunging on his kickslide. Not a terrible day but not a good one either.

– Alabama’s Arie Kouandjio shows a wide base but not so wide he can’t derive power. Covers a lot of ground in a few steps.

– One final note. A long snapper, not a lineman, but Navy’s Joe Cardona is at the Combine as a specialist. Certainly looks like a guy who is in the Navy. Very muscular. Ran well.

– Sadly, the online stream did a terrible job of showcasing the tight ends in receiving drills. Overall, their broadcast was weak with two separate 20 minute interruptions of straight commentary, ignoring the action behind them. Very discouraging and they took away the reason why we’re watching in the first place. I was only able to watch the gauntlet drills on the stream and only got a brief glance at them running flag routes on TV.

No major issues with him catching the ball, too.

To his credit, he showed up when it counted. Looked great in the gauntlet, extending his hands and routinely making grabs away from his body. 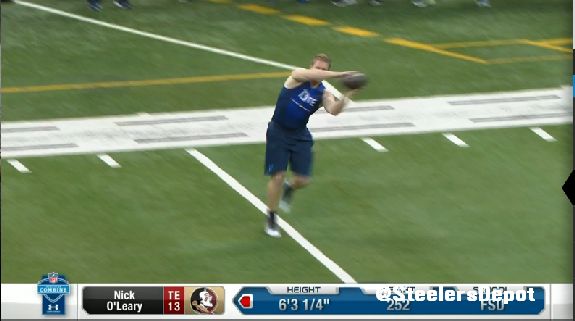 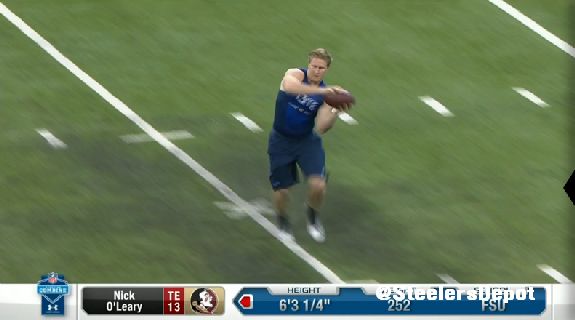 – Mycole Pruitt, whose name is pronounced “Michael,” has a muscular upper body. Long 33 1/2 inch arms with over 10 inch hands, giving him a promising catch radius.

He looked good….until he was asked to actually catch a football. Struggled in the gauntlet, constantly letting passes into his body. Made the grabs but body catches might as well be drops. Everything was into his chest. Going to drop some at the next level. 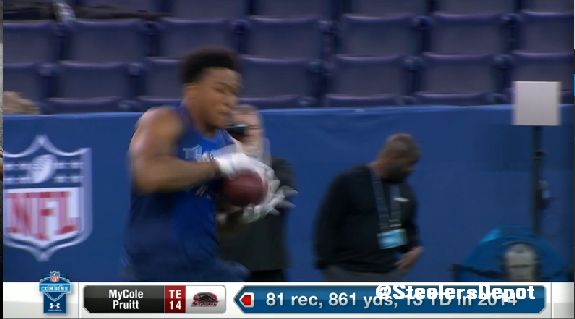 – UMass’s Jean Sirfin is long and lean. Skinny legs. Check him out after running the 40. The Minutemen need to upgrade their weight room. 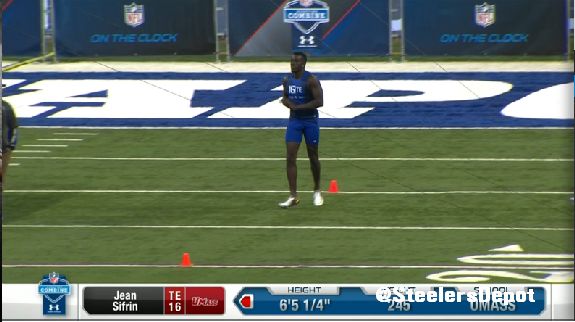 Had trouble adjusting to throws as different eye levels in the gauntlet and wound up missing two of the five moving down the line.

Was clean his second time through the gauntlet, a perfect 5/5. Got his hands extended away from his body and was smooth and fast down the line.

– Maxx Williams ran an ugly 4.90 in his first run through but you could tell his start was awful. Much better the second time around, reeling in a 4.77 and 1.63 split. Those are much more indicative of the athlete he is.

Like Walford, Williams did well his second time through the gauntlet. Clean and crisp. Overall, caught the ball very cleanly. Another smooth receiver.

– Blake Bell had five clean plucks his first time through. Former QB for Oklahoma turned tight end. 6’6 build with some good weight makes him someone worth looking at. Steelers have already had a meeting with him.

– Gerald Christian out of Louisville struggled both times through. Let one pass into his pads and dropped the final one on his first run. Had another drop on the second time around.

– Notre Dame’s Ben Koyack didn’t participate in any drills but sure looked great in the gauntlet. Natural hands catcher who plucked the ball away from his body each time. Made it look easy.