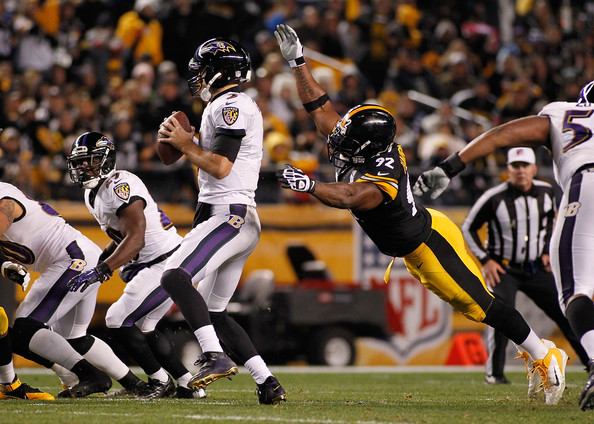 In the Week 9 meeting between the Pittsburgh Steelers and the Baltimore Ravens, veteran linebacker James Harrison pretty much had his way with left tackle Eugene Monroe on his way to recording two sacks and four quarterback hits in the game. With Monroe now ruled out for Saturday night’s AFC Wild Card Game with an ankle injury, Harrison will get a chance to impact the contest by taking it to undrafted rookie free agent tackle James Hurst.

While Hurst, who played his college ball at North Carolina, has already logged five starts this season, his play has been inconsistent at times. According to Pro Football Focus, he’s given up three sacks, six hits and seven hurries in 224 pass blocking opportunities this season.

If you dig deeper into Hurst’s rookie stats you’ll see that he was flagged six times this season for holding. When you consider that’s the equivalent of giving up a 10-yard sack sans the loss of a down, you can see that he’s had his share of rookie problems in 2014.

After having a lackluster showing last weekend in the regular season finale against Cincinnati Bengals All-Pro left tackle Andrew Whitworth, Harrison probably cant wait to take out his pent-up anger on Hurst. If he can get after the Ravens rookie tackle early in the game it might force the opposing offense to provide help in the form tight end Owen Daniels and in doing so, it could alter the Baltimore passing gameplan.

Against the Ravens Saturday night, Harrison will be looking to duplicate the performance that he had against them in the 2010 playoffs. In that 31-24 win, Harrison registered three second half sacks of quarterback Joe Flacco to go along with a hit and a hurry.

There will be two Jameses on one track Saturday night at Heinz Field and while both might share the same first name and initials, the James wearing the black and gold ought to be able to feast on the James wearing purple. I’d advise Hurst to hone up on his holding skills as he’ll likely need them in order to keep Flacco upright.