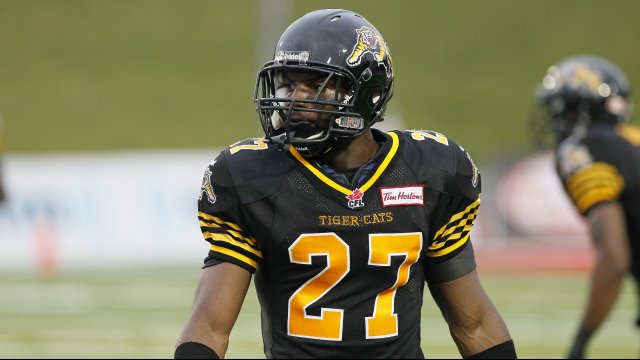 The Pittsburgh Steelers continue to show interest in CFL players during the early stages og the offseason as they reportedly have brought in cornerback Delvin Breaux of the Hamilton Tiger-Cats in for a workout this past week, according to Howard Balzer.

Originally signed up in 2007 to the play his college football at LSU, Breaux suffered a near career-ending neck injury, fracturing three vertebrae during a high school prep game, before being able to join the Tigers. While he did attend LSU initially, he was never medically cleared to play and eventually left school.

Breaux went on to play two seasons indoors with the New Orleans VooDoo in the AFL before signing with the Tiger-Cats in 2013.

Listed at 6’1″, 196 pounds, Breaux has the right measurables for the cornerback position. Last season the New Orleans native recorded 33 total tackles and one interception.

The Steelers could certainly use as many cornerback bodies on their offseason that they can get on the cheap. Breaux has had several other teams interested in him, but the Steelers might present him the best opportunity when it comes to making a final 53 man roster out of training camp.

The legend himself Franco Harris pic.twitter.com/YkbSG9Yyhz