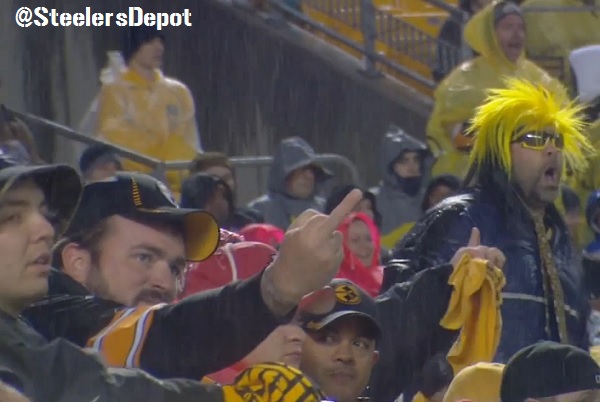 According to data analyzed by Proofpoint Nexgate, Pittsburgh Steelers fans use more profane language on social media than fans of any other NFL teams that made the playoffs this year.

According their website, the company analyzed social media data from the fans of the 12 teams to make the playoffs this season, and the runaway leader in the Profanity category was the Steelers, with inappropriate comments representing more than 6.1% of all comments made.

Social media give teams, like other businesses, a great platform for reaching current and new fans, but this comes with a risk: as Proofpoint Nexgate researchers recently reported, fans and followers can post inappropriate content to a team’s social media page, with a potential to negatively impact the team’s brand. In order to assess this risk, we analyzed the relative “profanity” of our playoff group by looking at the percentage of inappropriate content, which is mostly profanity but also includes hate speech, bullying, pornography, and other ‘negative’ language. (Table 3) The runaway leader in the Profanity category is the Pittsburgh Steelers, with inappropriate comments representing more than 6.1% of all comments.  The nearest competitor in the Profanity category was their division rival Baltimore Ravens, with inappropriate comments representing 1.6% of all comments. Playoff success was not a guarantee against profane comments, as the Super Bowl-bound New England Patriots ranked third in this category… and this was even before “Deflate-gate”. After the Deflate-gate story broke on January 19, the Patriots remained in third place by percentage, but the total number of profane comments (and of all their comments) surged to a level higher than any other team, with an absolute count of inappropriate comments 1.5 times that of the Steelers.

Being as I am on social media nearly 22 hours a day, I don’t doubt the results that Proofpoint Nexgate is reporting. In fact, I have probably contributed some to those high rankings

It will be interesting if this study is done next season for all 32 teams. Ah, who am I kidding? I really dont give a f-ck about the results but perhaps some of you do. You can read their full social media report here.