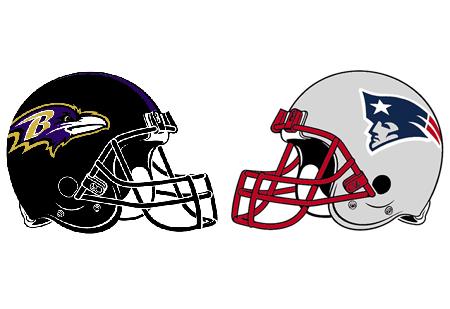 Including the three final kneel downs in the game, the New England Patriots only ran the football 13 times for 14 yards Saturday afternoon but thanks to quarterback Tom Brady throwing for 367 yards and three touchdowns on 50 pass attempts, they beat the Baltimore Ravens 35-31 in a Divisional Round playoff game at Gillette Stadium.

The Patriots overcame a 14 point deficit twice in the win to advance to the AFC Championship game where they will host the winner of the Sunday playoff game between the Denver Broncos and the Indianapolis Colts.

The Ravens started the game hot as quarterback Joe Flacco threw two touchdown passes in the team’s first two offensive possessions. Flacco, however, went on to throw two second half interceptions and finished the game with 292 yards passing on 45 attempts.

Unable to run early against the Ravens stingy defensive front, Brady managed to carve up Baltimore with a short, crisp passing game. The Patriots only threw the ball 15 yards past the line of scrimmage just seven times in the game and one of those was a double-pass play good for a touchdown by wide receiver Julian Edelman to fellow wide receiver Danny Amendola, who had already had caught one other touchdown pass in the first half.

The Ravens managed to run the ball against the Patriots defense Saturday as they finished the game with 136 rushing yards. Running back Justin Forsett led all runners in the game with129 yards on 24 carries, but it wasn’t enough.

Even though they managed 428 yards of total offense against the Patriots, the Ravens only converted one of their nine third down opportunities in the game. The Patriots offense, on the other hand, converted six of their 11 third down plays.

The Ravens also only had two explosive plays of 20 yards or more in the game while the Patriots had four.