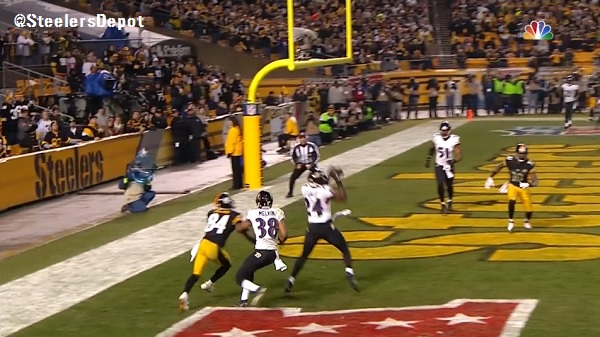 There are many ways in which the Pittsburgh Steelers hurt themselves last night in their 30-17 opening round playoff loss to the division rival Baltimore Ravens. You can choose any number of statistics, from the general to the specific, and say that that contributed to the loss, and chances are it will be a true statement.

But one thing that stands out to me is just how the string of turnovers that began with nine minutes to play in the fourth quarter saw the Steelers completely unravel upon themselves in a game that they were very much in.

If you go back and look at the game situation at this time, the Steelers were actually coming off of some momentum, and those they’d just given up a field goal, they were only down eight points in a one-possession game with plenty of time left on the clock and a veteran quarterback with 10 postseason wins, including two in the Super Bowl, on his resume.

Earlier, the Steelers got their own boost off a turnover when Justin Forsett ran into his own tight end—courtesy of James Harrison—and Ryan Shazier prevented the running back from recovering. Stephon Tuitt fell on the ball, and the Steelers struck back quickly with a touchdown, though a failed two-point conversion kept the margin at five, rather than three.

The Ravens came back on the following drive to net a field goal, but the Steelers were still in good shape, keeping it a one-score game, when disaster struck and the hubcaps starting rolling off.

After Heath Miller was unable to snare a wide pass on second and four for what should have been an easy first down, Ben Roethlisberger was under pressure on third down when newly signed running back Ben Tate blew a blocking assignment.

The absence of Le’Veon Bell in this situation can and will be broken down in another article, whether it’s written by myself or one of my colleagues, but suffice it to say that what happened next should not have happened.

With Roethlisberger under pressure, Tate tried to make himself available as a receiving option, and the quarterback lofted the ball in his direction—a bit high, but likely still catchable. Instead, the ball bounced off his hands, and eventually, somehow, landed between the knees of Terrell Suggs, who recovered for Baltimore at the 21-yard line.

In an instant, the Ravens struck from 21 yards out with a crosser to a tight end, and the margin was suddenly 15 rather than eight. The Steelers responded by driving, and even scoring, but the touchdown was negated by a penalty.

After that, Roethlisberger had his head slammed into the turf, and after coming back into the game, on the first play, he threw an ill-advised pass into the end zone that was easily intercepted.

After netting a safety and getting the ball back, all hopes faded when Miller lost the ball after a reception. Of course, one could argue that the game was long lost at that point, but if nothing else, it was the exclamation point on an awful end to the fourth quarter, and to the season.