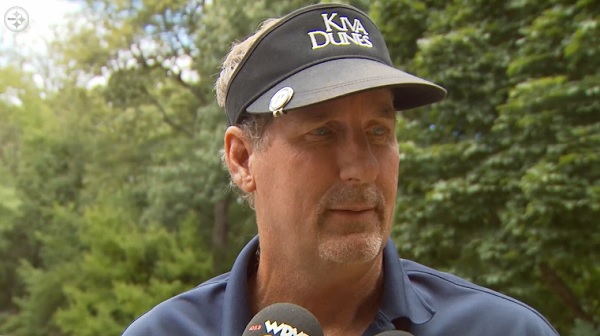 After being named the Pittsburgh Steelers new defensive coordinator Tuesday, Keith Butler sat down for an exclusive interview with Bob Labriola of steelers.com. As you would expect, Butler was asked during the interview if he’s a guy that likes to run the 3-4 and his answer wasn’t very surprising.

“I would consider myself a whatever-it-takes-to-win guy. If it’s a 3-4, that’s fine, if that fits your players,” said Butler, who has coached the Steelers linebackers since 2003. “I think you have to be able to fit your defense around the players you have. With what offenses are doing nowadays in the National Football League, they’re playing a lot of three wide receivers and a tight end and a running back, for the most part. In those situations, we’re going to be in kind of a 4-3 anyway, but we’re still going to be able to run the 3-4 also. It gives you a little bit more versatility, I think.”

Butler went on to agree that his feelings for the 3-4 are based more on what offenses are doing now with all of the spread formations and multiple receiver looks.

“Yes. I also think there’s still a place for the 3-4, and the reason I think there’s still a place for it is because you also have to be versatile as a defense as offenses are trying to be versatile,” Butler said. “So we don’t want to blow it up and say we won’t run the 3-4 anymore. We will run the 3-4, but we will run some 4-3 also, in our sub-package.”

As you can see, Butlers comments pretty much mirror what head coach Mike Tomlin had to say last March at the NFL owner’s meetings. It’s become a league where sub packages need to be played a lot more than they used to be and the Steelers weren’t able to do that enough last season because of the lack of personnel and injuries.

As I stated in a previous post, expect the Steelers to be more multiple now that Butler is running the defense. I would also expect to see more hybrid looks and that includes perhaps an elephant position similar to the one that Julius Peppers, Mike Neal and Nick Perry play with the Green Bay Packers.

The 2015 Steelers defense needs to do a better job at consistently pressuring the opposing quarterback and Butler certainly understands that. at the same time, however, he also knows that solid play in the secondary is also important.