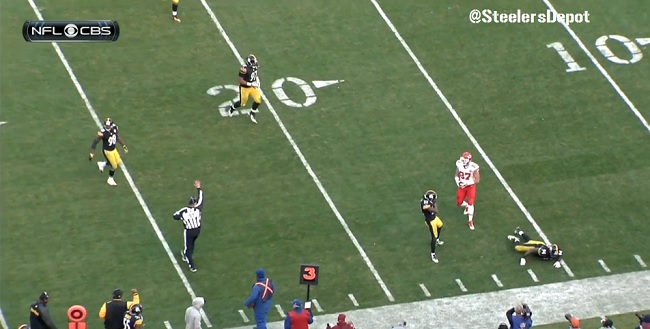 Less than 24 hours after Pittsburgh Steelers cornerback William Gay appeared to be unrightfully penalized for taunting following a fourth quarter third down stop by linebacker Lawrence Timmons in the Sunday win over the Kansas City Chiefs, head coach Mike Tomlin said he’s not looking for any response from the league for the call.

“I’m not going to waste my time placing calls to New York asking for clarification on stuff I know the answer to,” Tomlin said Tuesday at his weekly press conference.

On the play in question, Gay was flagged after he posed with his arms folded while staring at Timmons in front of the Steelers sideline. The penalty extended the Chiefs drive and it later culminated in a 43-yard field goal that cut Steelers lead to 17-9.

Side judge Scott Edwards was the official that threw the flag on Gay, but he was a good seven yards away and running toward the middle of the field to signal the end of the play as the Steelers cornerback was posing. Unless he heard Gay utter some sort of vulgar language while starring down his teammate for making a great play, there was no reason at all for a penalty to be called.

In the locker room after the game, Gay took the high road and said he has to be smarter next time and not put himself in a position for a taunting penalty to be called on him.