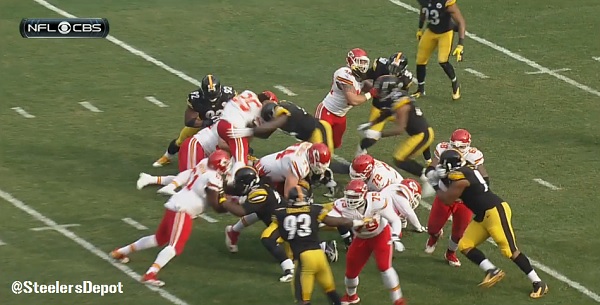 While the Pittsburgh Steelers defense surrendered four scoring drives on Sunday against the Kansas City Chiefs, they were able to hold each of them to simple field goal attempts in what was only the second game all season in which they did not allow the opposing offense to score a touchdown.

That was a critical element of the game, considering the Steelers offense only managed to match those four scoring drives, albeit with two of them ending up in the end zone, once on the ground and once through the air.

In all, the Chiefs offense stalled four times in the red zone, and twice failed to get it in with goal to go. But it was actually even worse than that sounds.

Those numbers do not include the three points that Chiefs head coach Andy Reid decided to take off the board at the end of the first half. Facing fourth and inches with 27 seconds to play and a timeout in hand, Reid wanted to get into the end zone before halftime, so he went for it, but the Steelers stopped them and brought a 10-6 lead into the locker room at the halfway mark.

Earlier in the second quarter, on the Chiefs’ previous drive, the Steelers held the Chiefs to one yard on third and six, but a fake field goal attempt that turned into a six-yard pass turned a fourth down into first and goal at the six. But that drive ended with a sack by Jason Worilds, forcing them to settle for a field goal anyway.

The Chiefs had yet another scoring opportunity taken away from them in the middle of the third quarter when they were driving inside the Steelers’ 30-yard line. On second and seven from the 27-yard line, Alex Smith threw a screen pass to Jamaal Charles, who was funneled inside. Stephon Tuitt met him on his way toward the middle of the field and knocked the ball loose at about the 25-yard line. The Steelers recovered, keeping the score at 10-6 at that time.

Interestingly enough, two of the times in which the Chiefs were forced to settle for a field goal were preceded by a sack on third down, and both of those instances came from within 10 yards from the end zone.

The defense could have been even better if linebacker Lawrence Timmons was able to complete his near interception early in the fourth quarter on a bobbled catch attempt on a third and seven play that would have kept the Chiefs from adding three more points and making it a one-score game at that time.

The last time the Chiefs had the ball, they faced a third and 14 after a sack on first down, lined up on the 16-yard line. Smith threw over the middle to Charles just a few yards beyond the line of scrimmage and the defense swarmed to keep him in front of the chains and force another field goal attempt with less than two minutes remaining.