In the second quarter of the Pittsburgh Steelers Sunday game against the Atlanta Falcons, linebacker Jason Worilds was flagged for roughing the passer after he sacked quarterback Matt Ryan on second down. It was a huge play in the game and I have an animated gif of the hit for you to look at below.

If that gif is not enough to show that Worilds probably shouldn’t have been flagged, below is a still shot of the frame where he makes first contact with Ryan. 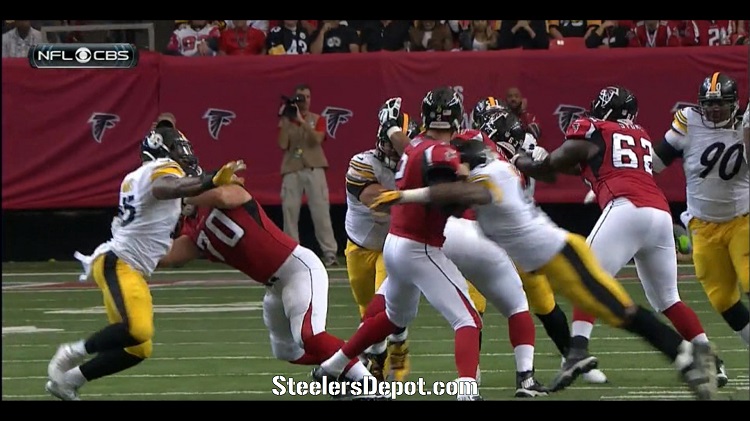 Here is what Mike Pereira, the former Vice President of Officiating for the NFL, said about the hit on twitter right after it happened.

It was close – but not a penalty in ATL. not a crown of the helmet hit

At halftime, Steelers head coach Mike Tomlin was asked about the hit and subsequent penalty on his way to the locker room.

“It’s today’s NFL,” said Tomlin. “He’s trying. He saw what he hit, he kept his eyes up, he didn’t hit him in the head and neck area. We have to live with that. Everybody’s got to live with that. I’m for the protection of quarterbacks.”

We will know come Wednesday or Thursday whether or not Worilds was fined for the hit. If he is fined, I’m sure that he’ll appeal it.