Most fans of the Pittsburgh Steelers only like wide receiver screens when they result in huge chucks of yardage or a score. In the Sunday win over the Cincinnati Bengals, fans got the best of both worlds when rookie wide receiver Martavis Bryant scored from 21 yards out on wide receiver smoke screen.

A good smoke screen is usual set up by the intended wide receiver starting up field as if he’s going out in a route before coming back to the line of scrimmage to catch the pass. Bryant executes that fake perfectly on this play and as you can see in the first picture below, Bengals cornerbacks Dre Kirkpatrick and Leon Hall are both moving backwards before recognizing the screen. The slow reaction by all three members of the Bengals secondary involved in this play allows wide receiver Markus Wheaton and tight end Heath Miller to get out into space and on their designated player to block. 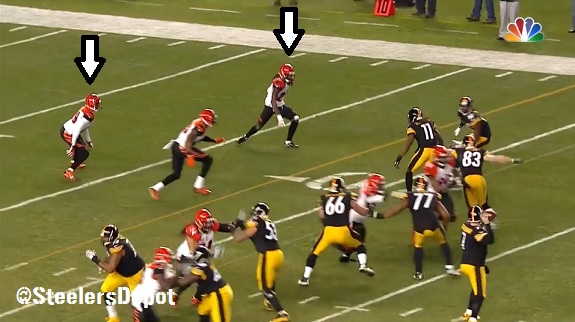 Wheaton’s block is the easiest of the two as he has the angle on Kirkpatrick. In addition, Kirkpatrick’s job is to keep Bryant inside of him as he takes on the block. Regardless, Wheaton still has to keep Kirkpatrick held up long enough for Bryant to slip through the lane and he does just that. 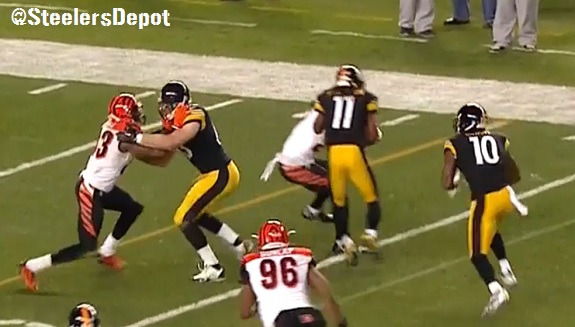 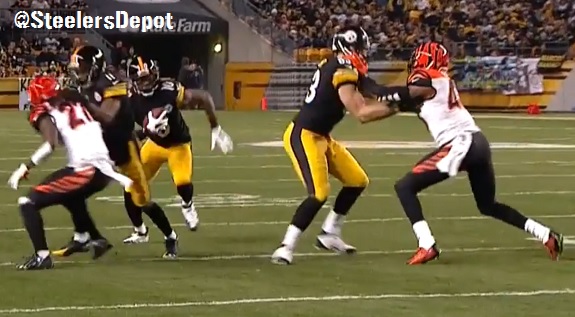 Miller’s block is the hardest of the two as not only does he have the longest distance to go to reach Bengals safety George Iloka, he also has to get to the outside of him and pin him to the inside of the field. That’s tough to do. Below is a slowed down animated gif of Miller in action.

Miller not only accomplishes that, he gets his arms extended while Iloka has both his hands near the tight end’s neck. His base, footwork and use of his hands is fantastic here. He even manages to wall-off Hall, who really took a poor angle once he recognized the play was a screen.

Lastly, Bryant’s quickness allows him to go through the lane untouched as Kirkpatrick shakes loose from Wheaton.

Here are both of the all-22 angles of the play in animated gif form so you can see all of the moving parts.