Breaking down the lone sack allowed by the Pittsburgh Steelers in their victory over the Atlanta Falcons.

Falcons are running a stunt in an attempt to free up MIKE linebacker Paul Worrilow (#55). Both OLBs are dropping into coverage to play hook zones. The NT and RDE fan to the outside in an attempt to draw the interior lineman’s eyes. The RDE to draw LG Ramon Foster and the NT to draw C Maurkice Pouncey. The concept, a common one around the NFL, is to create a one-on-one matchup of Worrilow on Le’Veon Bell. 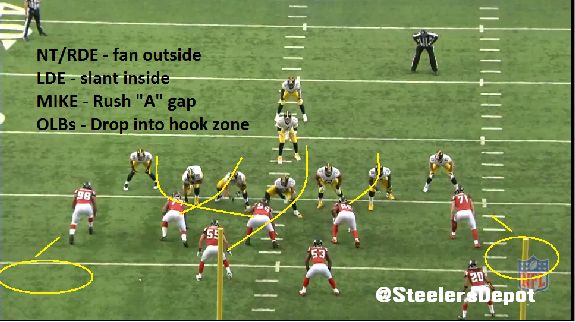 It initially works with the center and left guard fanning out. 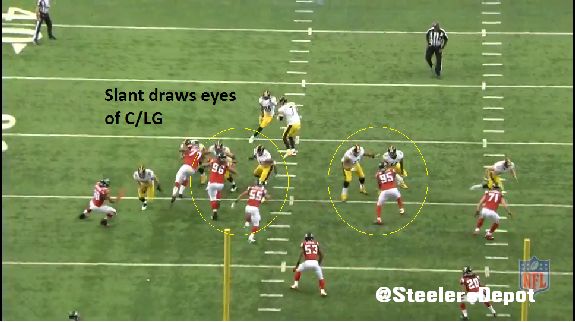 But Pouncey and Foster are able to recognize the slant and turn their attention to Worrilow. Though they never block him cleanly, they do a good job of squeezing his rush lane, never allowing him to get his hands into Bell. And Bell does a fantastic job in protection, knocking the linebacker to the ground. But have to give credit to the line for not giving Worrilow the opportunity to square up. 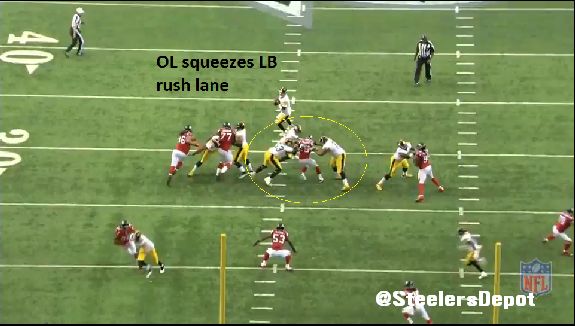 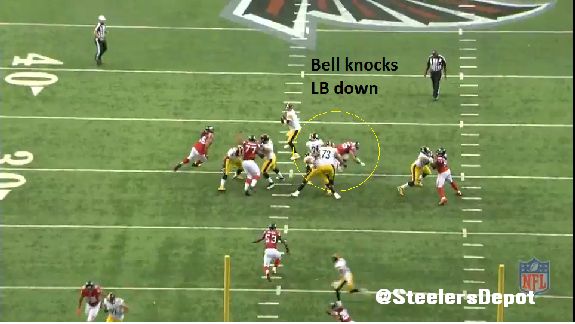 With the linebacker out of the picture, there’s only three pass rushers. And they’re all 300+ pound defensive lineman. Ben Roethlisberger *should* have plenty of time.

Focusing on the offense’s right side of the line, the LDT and the LDE are stunting. 345 pound NT Paul Soliai is looping to end of the line with the end crashing inside. It’s a simple T/E stunt and as pointed out above, probably never really intended to generate pressure. Soliai moves at the speed of smell and has the turning radius of a World War II tank.

David DeCastro does everything right. He puts eyes on Soliai and once he sees the burly DT move down another gap to the outside, he crashes hard into the slanting end. The end is now DeCastro’s responsibility and it serves an alert to the RT to pick up the looping DT. That’s partly how the communication works. 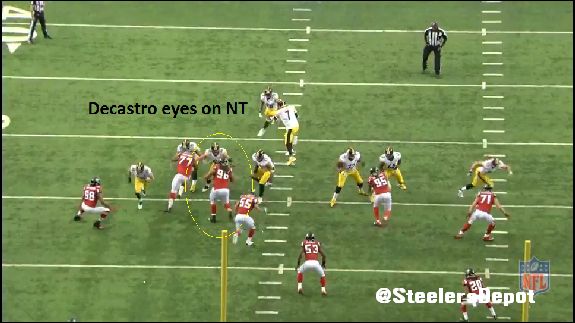 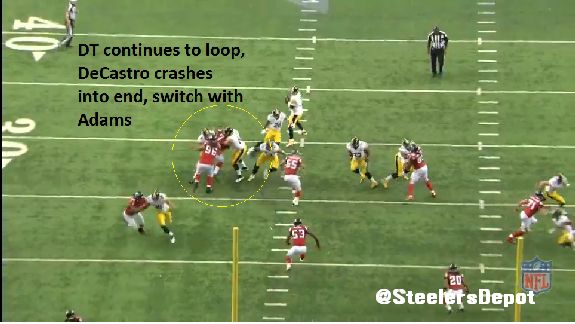 Which brings us to Mike Adams. I again want to preface it appeared he didn’t have a terrible game Sunday, though I’ve yet to get into the Coaches Tape beyond this play. I don’t want to beat a dead horse. But Adams simply misses the stunt. There’s never even an attempt to notice it. He just rides the DE the entire time. Just awful awareness. 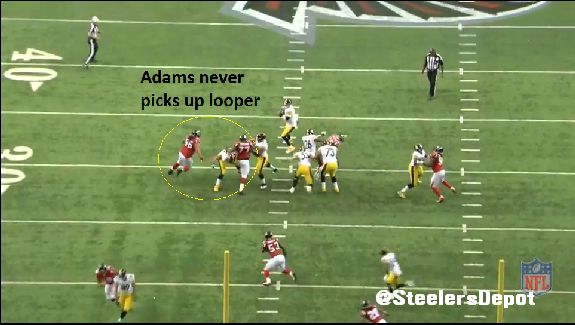 Soliai turns the corner and eventually makes his way to Roethlisberger. Ben is forced to climb and the linebacker, rookie Prince Shembo (#53), rushes in to help clean it up. They are each given half credit on the sack. 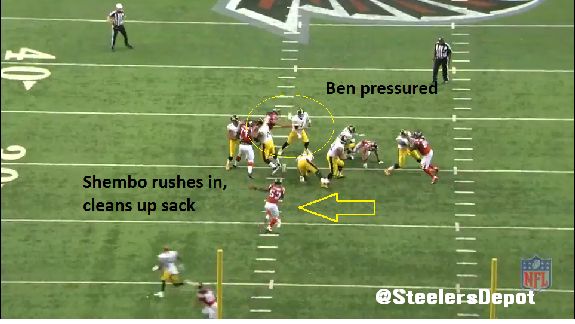 Coming into the day, the Falcons generated only two sacks all season from their DTs. And only one since Week Four. Very bothersome the Steelers allowed one, especially to a – and I can’t stress this enough – a 345 pound defensive tackle who looped around the edge.

From last week against the Cincinnati Bengals, where there wasn’t a sack breakdown, Adams was called for one penalty. That is reflected in the seasonal counter below.