Sack breakdown of the only sack allowed by the Pittsburgh Steelers against the Kansas City Chiefs.

Steelers keep six in to block plus Le’Veon Bell on a block/release against a four man Chiefs rush.

Half-hearted playaction and it doesn’t get the linebackers to cheat up. We get two crossing routes from Martavis Bryant and Antonio Brown, left to right from the same side.

It looks like Roethlisberger’s first glance is at Bryant, based on how his feet are positioned at the height of his drop. But with the play-action not fooling the linebackers, inside linebacker Josh Mauga has the window taken away. 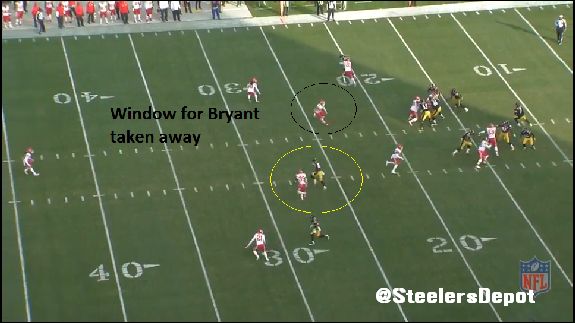 Ben moves to his second read, Brown. And for a moment before the rush gets home, it looks like he could make this throw. 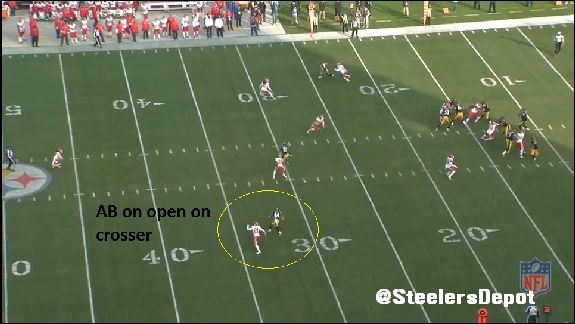 The pocket isn’t stable but if there’s one thing that Roethlisberger has learned in his time in Pittsburgh, it’s how to deal with a cluttered pocket.

On the line, ROLB Justin Houston and RDE Jaye Howard (#96) end up crossing paths but I don’t consider this to be an actual stunt. It looks more coincidental than anything else. Houston converts speed to power and bull rushes Kelvin Beachum and Howard loops around because Ramon Foster nudges him that way. Houston’s rush is too initially wide to think it’s a designed stunt. 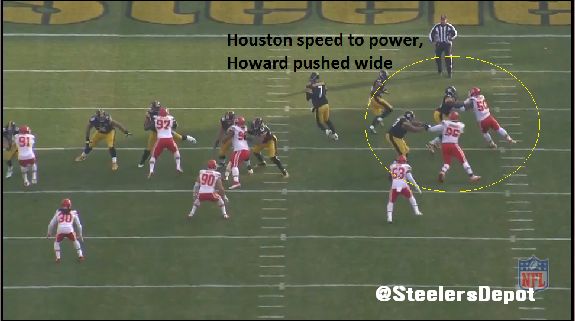 Houston is the lower man working against Beachum, getting into his pads and working him back. However, the Steelers’ left tackle does do a valiant job of staying square and mirroring. 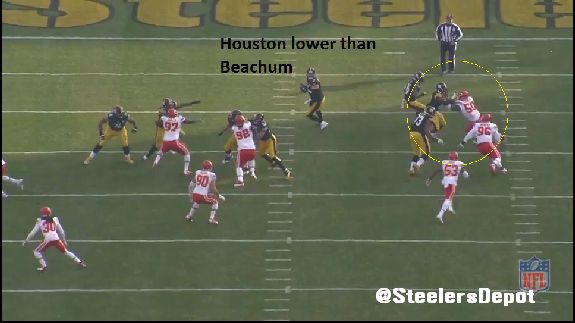 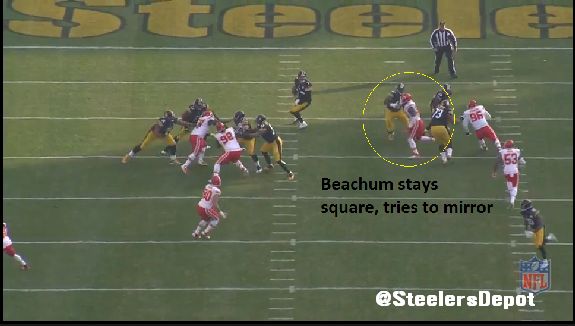 Foster attempts to seal the edge against Howard. Roethlisberger appears to feel some of that heat and starts to hitch into the pocket, right into Houston.

With Beachum sliding to his left on a ninety degree angle, he can no longer mirror Houston, who’s naturally a more agile player. Houston plants and shifts back to his right, bringing Roethlisberger down. 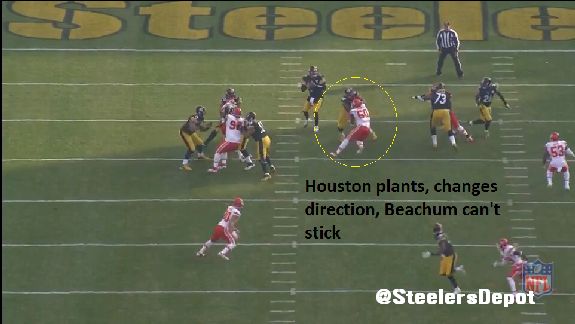 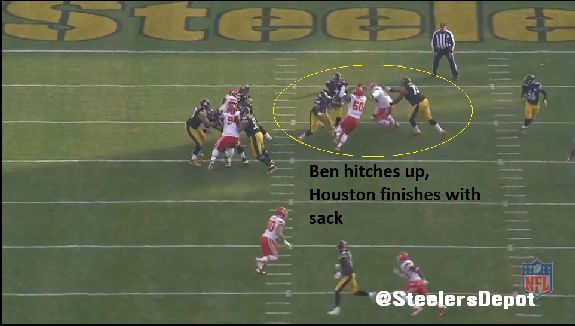 I’m going to give Roethlisberger half the blame for not pulling the trigger on an open Antonio Brown. It’s not ideal conditions but that’s life of a quarterback. There is a moment where Roethlisberger could have made the throw before the pocket caved in.

I’m going to pick just one of the lineman responsible for the other half of the sack. Not going to break blame down into thirds because this isn’t the Wild West. Halves only, that’s the rule.

And this is one of the toughest calls I’ve made all season. You could assign blame to Beachum, for actually allowing the sack, or Foster, allowing the pressure forcing Ben to climb the pocket and into Houston.

I decided to give it to Beachum. He is at fault for losing leverage and getting pushed back. And then for obviously failing to block the defender responsible for the sack.

It’s harder to blame Foster. He actually does seal the edge. It creates the feeling of pressure but the Steelers’ guard does manage to push Howard up the arc, even if it isn’t pretty. And that’s a difficult and uncommon assignment for the guard. He’s not used to having to do that. Given those circumstances, the result is as good as it gets for Foster. Not anything he does wrong.

A chip from Bell wouldn’t have hurt, either.

In defense of Beachum, it’s important to realize he isn’t bad in pass protection just because he leads the team in sacks given up. He’s yet to miss a snap on offense and is facing a premier pass rusher most weeks. Overall, it’s quite the opposite. He’s done a fine job in pass protection. It’s nice to quantify it but as always, the statistics don’t tell the whole story. Just something to keep in mind.