Needing one more first down Sunday to put the game away on third and one from the Atlanta Falcons 39-yard-line with two minutes remaining, the Pittsburgh Steelers put the ball in the hands of their quarterback and he delivered on a great play call.

On the play, the Steelers used a heavy personnel grouping consisting of two tight ends and fullback, who also lined as a tight end. The formation used was one that was strong to the left side complete with wide receiver Antonio Brown in the backfield as a motioning h-back.

Figuring that the Steelers were likely going to run out of this grouping and formation, the Falcons defense counters by essentially having all 11 players in the box. 10 of those 11 players were even lined up within five yards of the line of scrimmage.

At the snap, the offensive line sans right tackle Mike Adams all move to the left and quarterback Ben Roethlisberger uses play action to running back Le’Veon Bell. That play action gets everyone on the Falcons defense to bite.

On the backside of the play, tight end Heath Miller easily releases up the middle of the field as Roethlisberger rolls out to his side. While Miller winds up being Roethlisberger’s target on the play, the quarterback does have other options in case the safety would have carried the Steelers tight end up the field.

If you’ll notice, fullback Will Johnson released from the left side of the line on short crossing route and like Miller, he too is wide open past the chains. 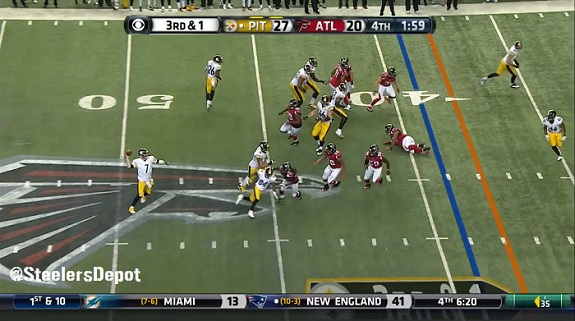 Miller easily hauled in the pass from Roethlisberger and two kneel downs later the Steelers had their ninth win of the season.