Although the Pittsburgh Steelers run game has been strong the last two weeks, they’re still leaving yards on the field. Schematically, there’s a specific area that needs to be improved on that popped up during the loss to the New Orleans Saints.

It isn’t the number on concern on the team, far from it, but still worth exploring.

In their blocking scheme, the Steelers were often asking too much out their blockers with their reach blocks.

A reach block asks a lineman to cross a defender’s face down the line and seal him. It’s a difficult block that involves a player to explode off the line, set his hips, and seal, but one that it’s in every playbook.

Just a real basic example below. Run off tackle with the RG reach blocking the Mike linebacker. 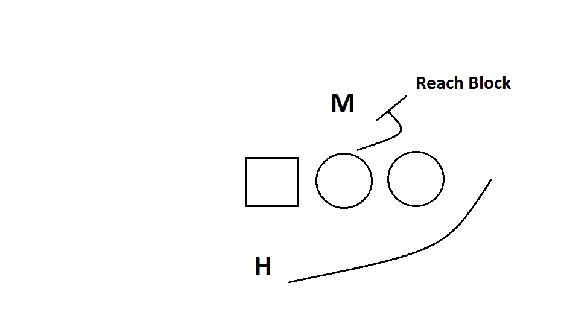 But Sunday, the Steelers were asking their lineman to reach block defenders that were too far down the line. A couple examples below.

On this run, the team asks right guard David DeCastro to chip the NT and then reach block ILB Curtis Lofton on a stretch run to the left. 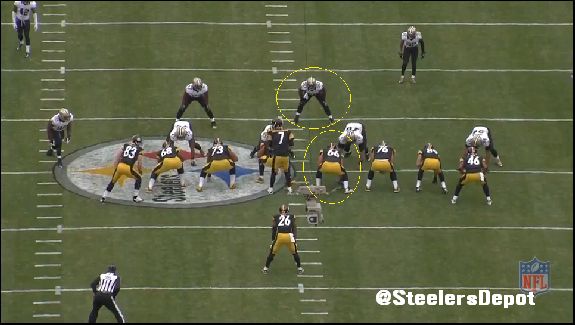 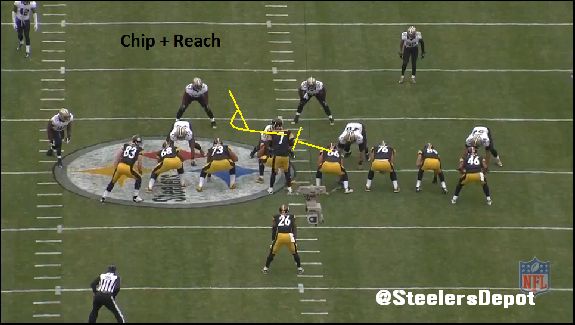 With Lofton having an inside shade, there’s no way DeCastro can get there in time. The reach block alone is difficult enough, let alone having to chip and then move to the second level. He can’t make the block and Lofton fills the lane. 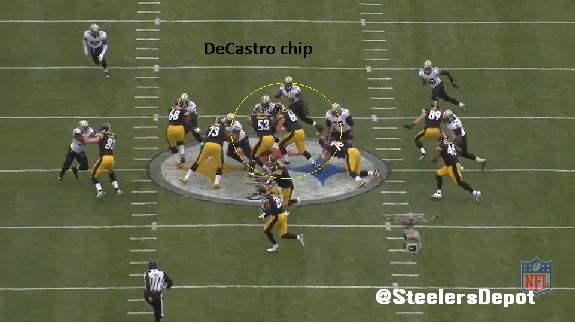 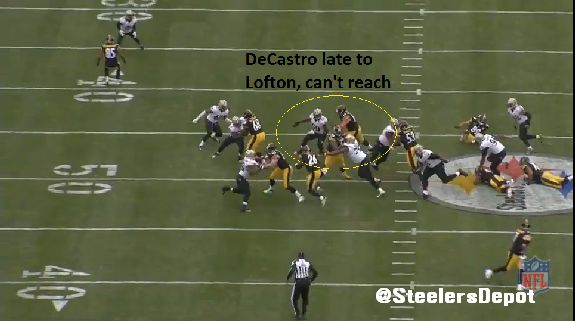 If DeCastro makes that block, there’s a chance Le’Veon Bell could rip off a big gain. Just one defender from the side stands in his way. Those are odds I like. It goes for a modest gain of five. Not bad but yards left on the field.

Same issue in this next instance though even more severe.

Run off the left side. Matt Spaeth, on the offense’s right, is being asked to come across and block SAM linebacker Ramon Humber. 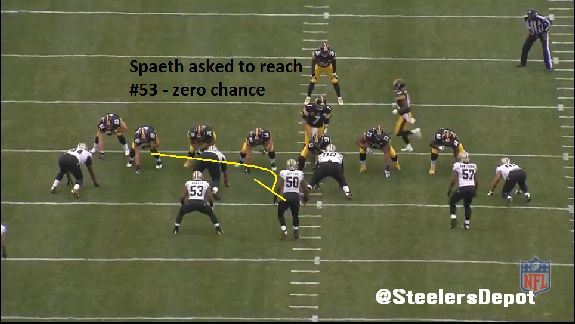 Humber is a full gap down and Spaeth has lost from the snap. With the offense’s flow, chiefly DeCastro trapping (the linebacker’s key) Spaeth is not going to be able to cross the defenders face. His best hope is to get to push him down the line but he isn’t ever able to get enough of a piece of him to make an effective block. He falls off and sets the edge. 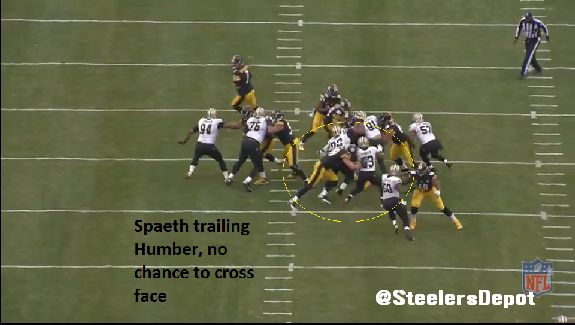 Just a couple things for the Steelers to clean up schematically in its blocking scheme. Even using something as simple as a counter can hold the linebacker long enough to allow the lineman to reach. And in general, the blocking assignments have to be tweaked to avoid putting lineman in difficult situations. Spaeth can’t be assigned to block like that. It offers him no chance to win. As a coach, you have to put your players in position to do their jobs. Give them a fighting chance.

Do that and the Steelers’ run game could be even more successful.