– Andy Dalton is inconsistent. Two touchdowns and four interceptions in his last two weeks. He’s thrown at least one pick in five of his last six games. Much needed for a defense that is lacking turnovers. Not too many spectacular throws from him in the two games I watched. And he forced some passes in the end zone, like this jump ball into clear double coverage. 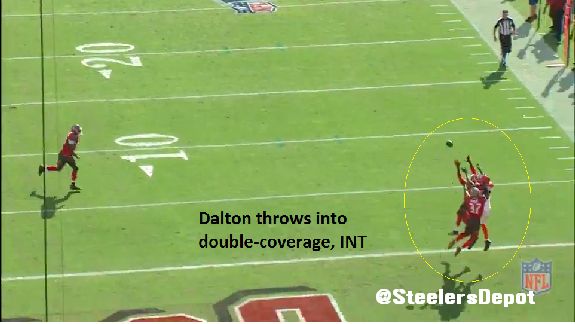 Bengals do use their fair share of packaged plays. Run/pass option for Dalton.

– Jeremy Hill has been the lead, dominant runner over the latter half of the season. Out-touched Gio Bernard 36-30 the last two weeks. Hill is a big kid out of LSU, listed at 238 pounds. But the kid is explosive and hits the hole with conviction. Love how he bursts through the lane on this counter. 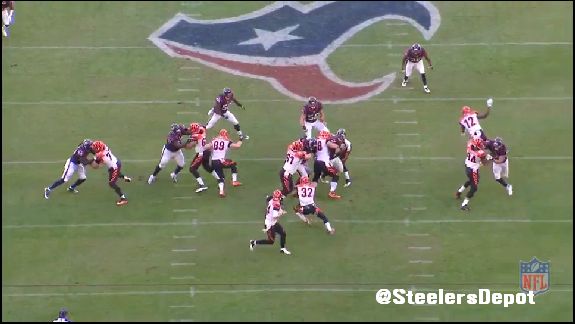 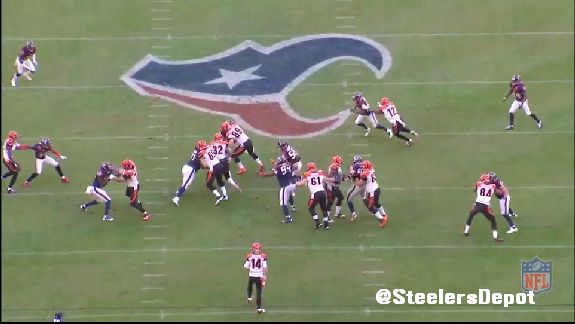 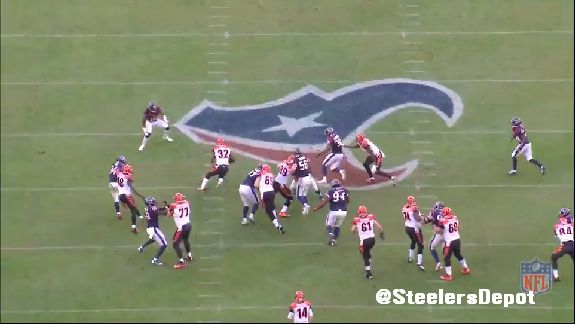 Didn’t get a great look at Bernard but he’s a guy that can make you miss laterally. Spin move to make the DB miss in space. 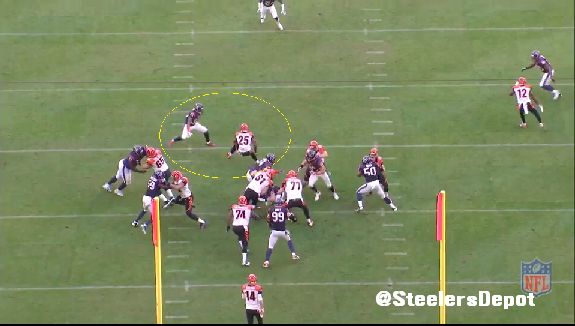 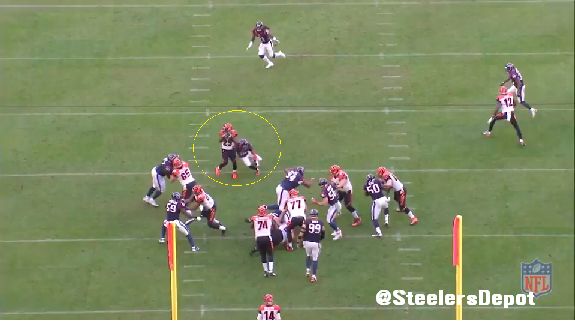 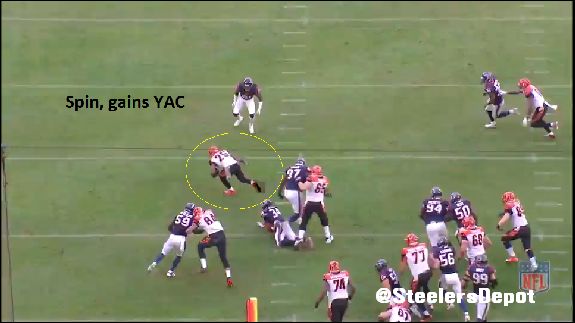 Steelers’ fans know what he’s capable of. Threat out of the backfield, too.

Bengals have utilized a lead blocker a lot in the last several weeks. Ryan Hewitt is an UDFA out of Stanford and a decent lead blocker. Used in their two back power run package as well as some use as an in-line blocker. Logs a lot of action on special teams, too.

Like his ability to leverage defenders. Low man on this run against the Tampa Bay Buccaneers and wins the battle. 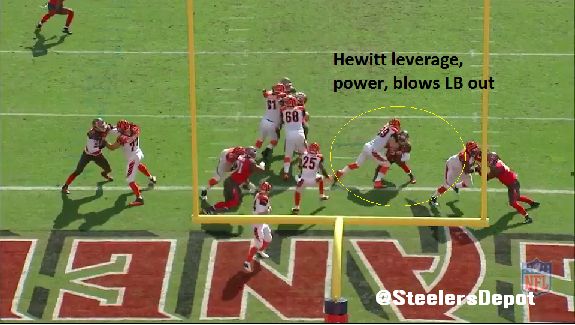 Knocks a DB out of the play in space below. 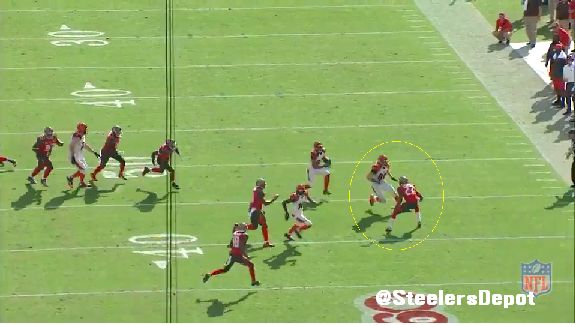 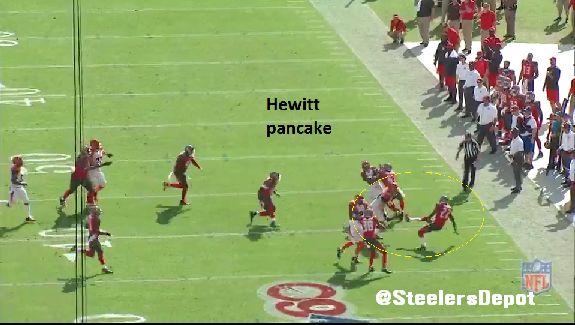 Steelers’ linebackers are going to have to show the ability to hand fight and shed. Something we haven’t seen out of Ryan Shazier. Big test for him.

– Jermaine Gresham is logging enough catches to keep him relevant but he’s not a threat. Only two touchdowns all year – both coming in the same game – and only one grab longer than 20 yards in 2014.

– AJ Green is back in a big way. 16 catches for 178 yards and a score in his last two games. Not afraid to go after a corner time and time again if they’re getting a matchup that’s working. Abused Houston Texans’ CB AJ Bouye repeatedly. Back shoulder fades that are extremely tough for a cornerback to play against someone with a 6’4, 207 frame.

Mohamed Sanu scares me, too. Stats have dipped with Green fully healthy but he’s a lanky receiver with long arms that give him a great catch radius. Really like his body control along the sideline.

Used as their gadget player. Has six rushes, used in their Wildcat package, shown below with the backside guard pulling, and he’s thrown three passes for 79 yards and a touchdown. Includes an 11 yard completion last week. Screen that turned into Sanu throwing across the field to Green along the right sideline. 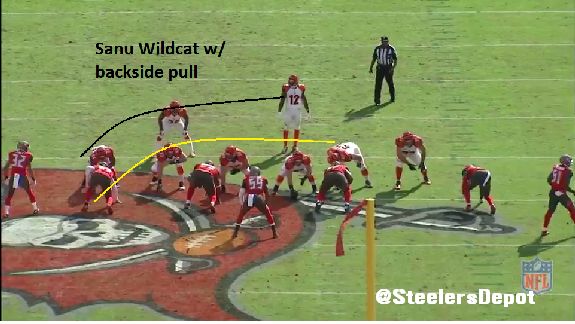 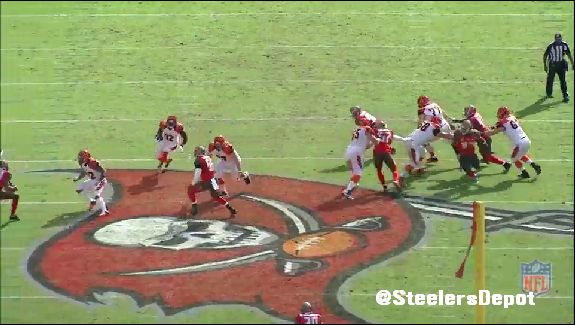 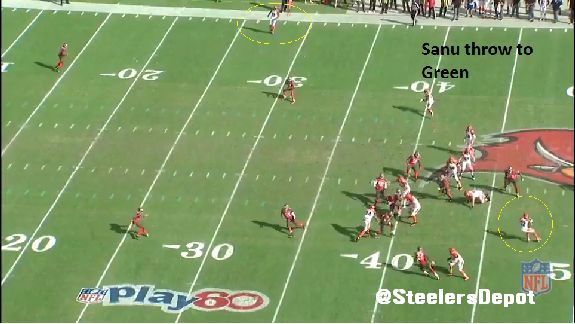 Green and Sanu are both strong run blockers who use their length to their advantage. Quality stalk blockers.

Not much production outside of their starters. Rotation for their #3 WR. Brandon Tate hasn’t caught a pass since the first week of November. James Wright had his best game last week, recording three catches.

– The offensive line was shaken up last week due to in-game injuries. Mike Pollak got 19 snaps at LG after right tackle Marshall Newhouse went down though Newhouse finished the game. Clint Boling, a versatile swing man from Georgie, shifted to RT.

– Left tackle Andrew Whitworth may be 32 but he’s still playing at a high level. Back home at his left tackle spot and excelling, especially in the run game. Asset at the second level with a strong punch and ability to stick in space.

It’s harder to see in pictures but Whitworth takes control with a punch of his left hand to the linebacker, finishing the play with a pancake. 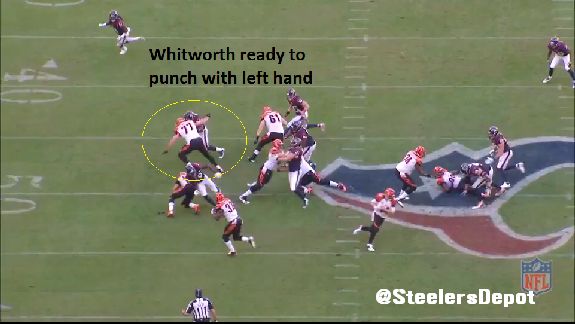 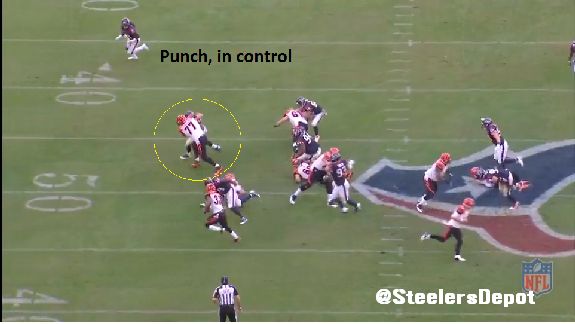 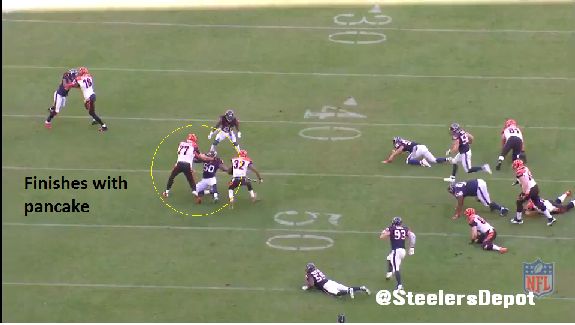 – Elsewhere, the line is just ok. Kevin Zeitler underwhelmed me. Doesn’t do a great job laterally. Center Russell Bodine is a rookie fourth rounder. Andre Smith was lost for the year, causing Newhouse to step in at RT.

– Although the Bengals are thought of a zone team, they’ve run a ton of power under new OC Hue Jackson. Power out of their two back sets with Hewitt, zone in their one back sets. But they trap and run Lead Strong quite a bit. Steelers better get off their blocks Sunday.

– The defensive line is deep. Eight of them played at least ten snaps last week. One up and comer is Brandon Thompson. Nicknamed “Yams” for his massive thighs, he actually is moving a lot better than what he was billed coming out of Clemson. Like his hand fighting and ability to shed blocks.

Played just 148 snaps but has 17 tackles, the best play to tackle ratio of anyone on the line.

– Geno Atkins isn’t having a great year coming off injury but is still a potentially impact player. Carlos Dunlap has great size and length coupled with tremendous bend. Likes to rush wide and then go inside once the tackle starts to cheat. Mike Adams is going to have his hands full.

Like the bend and the rip from Dunlap against Derek Newton shown here below. He’s got six sacks on the year. 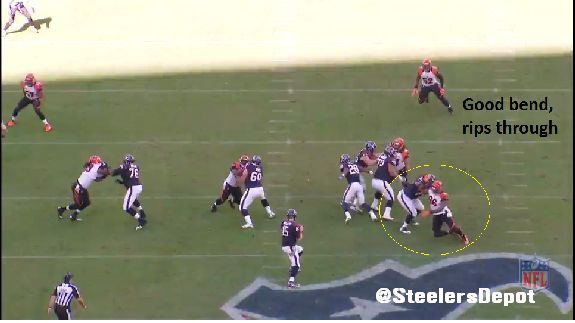 –  Emmanuel Lamur and Vincent Rey lead the team in tackles but have neither have a sack nor forced fumble. Lamur has two interceptions but overall, these aren’t high-impact players.

– Terence Newman is the vet who isn’t afraid to compete. But Mike Evans showed him up last week, you’ve probably seen the Vine, planting him into the ground. Newman is fifth in the league in tackles with 59.

– George Illoka is a tall safety at 6’3. He plays opposite Reggie Nelson, another physical safety. They will challenge receivers going across the middle. They’ve combined for five interceptions. Or five more than the Steelers’ safeties have.

– As a group, the Bengals have an anemic pass rush. 15 sacks rank 30th in the league. They haven’t had more than one sack since Week Nine.

– The Bengals 3rd down defense is solid, allowing their opponent to convert 37% of the time. That’s the seventh best mark in the league.

– Overall, I didn’t like the Bengals ability to shed blocks. They hold the POA well enough but don’t go the extra step of shedding.

– Not a blitz heavy team but will send a couple overloads with some safety blitzes. Like to overload gaps. But main pressure, or whatever they get, comes from the front four.

– Darqueze Dennard and Dre Kirpatrick are the gunners and jammers. Cedric Peerman is the upback while Kevin Brock and Will Clarke form the wedge.

– Other core special teamers include Shawn Williams (six tackles) and Taylor Mays (five tackles). They have also used their starters on their first punt return in each of the last two games.

– One miscellaneous note. The Bengals are 12-1-1 in the last two seasons at home. I like their odds.