Scouting report of the Atlanta Falcons for tomorrow’s game against the Pittsburgh Steelers.

– Matt Ryan leads the bunch. Overall, he’s an accurate QB with a good arm in the middle of a fine, although not particularly spectacular season (25 TD, 11 INT, 65.5% completion). He’s thrown the ball 39+ times in each of his last four contests.

– Steven Jackson has looked a little better the last two weeks but we all know what he is at this point in his career. A plodder who gets what’s blocked. His longest run of the year came against the Arizona Cardinals two weeks ago but it was helped by some of the worst tackling “attempts” I’ve seen by the Cardinals’ secondary.

For comparison’s sake, Le’Veon Bell has had a 15 yard rush on over six percent of his carries.

Devonta Freeman is a rookie out of Florida State with some wheels. The Falcons try to take advantage of this by putting him on the edge with some stretch runs. And he’s busted off more big plays than Jackson has. Four of his 50 carries have gone for 15+.

Jacquizz Rodgers will get two or three carries but is consistently used out of the backfield. Three receptions in each of the last four weeks.

Quizz has some guys in pass protection. Here he is taking on a defensive end. Does a nice job, actually. 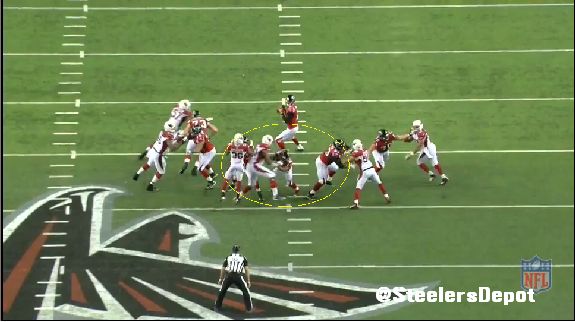 – Julio Jones obviously begins the story at WR. As of this writing, we’re still not sure what his status will be.

He’s a big bodied receiver with long arms, giving him a big catch radius, and excellent body control. But he’s not just big. He’s agile. Outstanding route runner and creates separation for himself. Turns this Green Bay Packers’ cornerback inside out on this stutter that he eventually breaks inside. 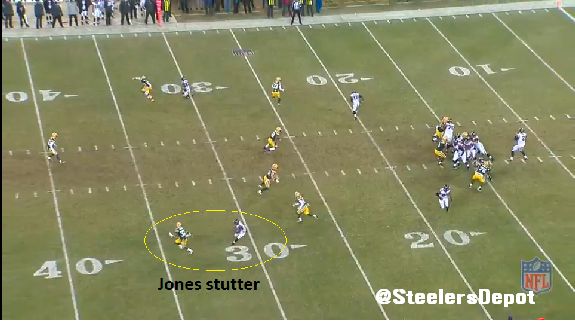 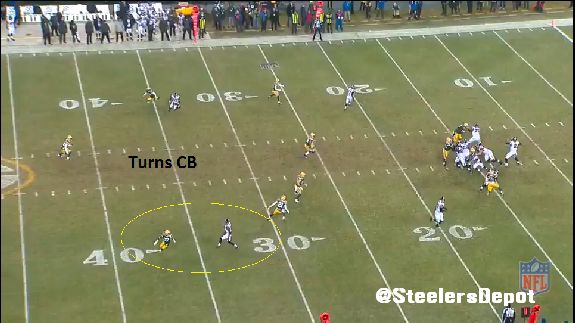 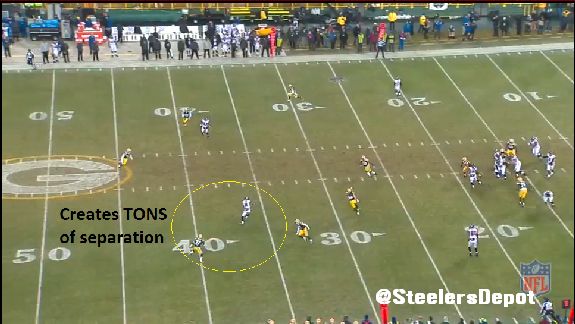 They’ll line him up in the slot occasionally too to try and get a favorable matchup. Again, against the Packers. Complete to Jones on a slant. 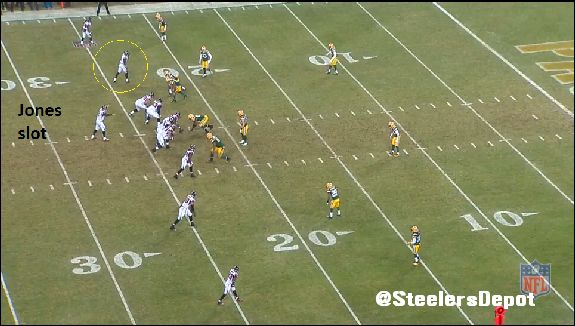 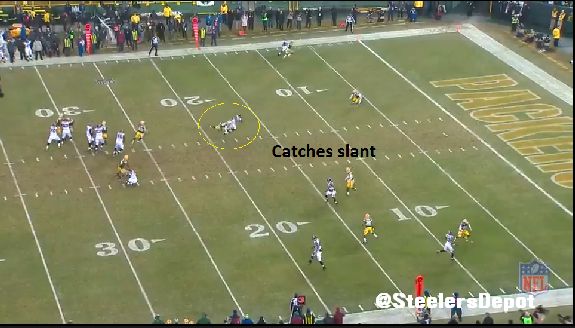 – We can’t forget about Roddy White being a threat, either. He’s caught a touchdown three of his last four games and has found the end zone just as much as Jones in 2014.

– Harry Douglas plays some of his best football when one of the top two receivers are down. Went for over 100 yards two weeks ago when White was hurt.

– Devin Hester isn’t much of a threat as a receiver. He’s only had two games with over 50 yards reeving, both of which came within the first three weeks of the season. But they’ll use him on some gadget plays and end arounds. He has a rushing attempt in four of his last five games. They haven’t gone for much though, the longest a gain of nine over that span. Still, something to watch out for.

– Tight ends aren’t used. Levine Toilolo is a Matt Spaeth type. Glorified blocker. He does pose a size issue though at 6’8 265. He was even used as an emergency offensive tackle earlier in the season, playing an entire quarter when the team ran out of lineman.

– Speaking of which, it’s an offensive line that has been in flux. Only one player has seen 90%+ of the seasonal snaps, right guard Jon Asamoah. Eight lineman have played at least 20% of the snaps on the year. Peter Konz, Lamar Holmes, Joe Hawley. Five OL, including those three, are on injured reserve. Steelers’ fans can empathize.

Although in the last two weeks, the combination has been the same.

– Rookie left tackle Jake Matthews impressed me in pass protection. Liked his arm extension and ability to mirror. Did a nice job. Run blocking is less stellar and he has a tendency to fall off his blocks.

– There were times when veteran left guard Justin Blalock over slides to the outside and gets beat inside. Something that could be taken advantage of Sunday.

– Steelers are facing another rookie center, at least their third this season. James Stone starts at the pivot. An undersized UDFA from Tennessee, I didn’t see any glaring issues with him.

– I could never conclude for sure but Asamoah but give away when he’s pulling. Right foot seems really deep when he pulls. 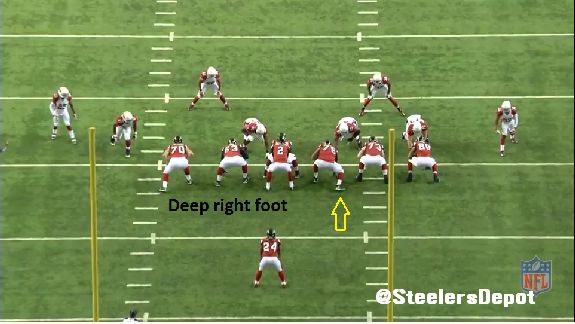 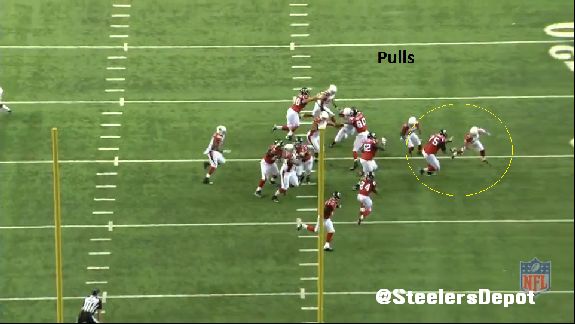 – Right tackle Ryan Schraeder got a bit of a raw deal as he was constantly bull rushed in the Arizona game by Lorenzo Alexander. Lineman rarely look pretty against it. Despite understanding that, he’s someone who allows defenders to get into his pads and doesn’t possess a good anchor. Jason Worilds needs to stop trying to run up the arc and throw in a couple bull rushes this weekend.

– Overall, it’s a line that does a much better job in a booth than it does when asked to block in space. On stretch and toss plays, they have a bad tendency to fall off their blocks.

– Some other offensive tendencies.

– They love to mirror concepts out of 2×2 sets. Have the same routes to each side. Example below with on a curl/dig. 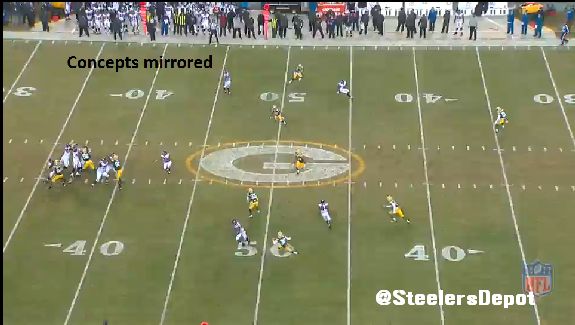 – And they heavily use reduced splits, lining their receivers up inside the numbers. Especially to the hash the ball is placed on.

Helps them individually and in combination routes. Can run more effective out routes and they’ll run the mesh concept. Two drag routes to create a pick ad space. Harry Douglas gets wide open below off of it. 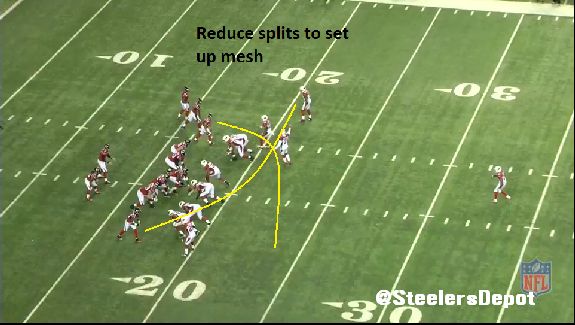 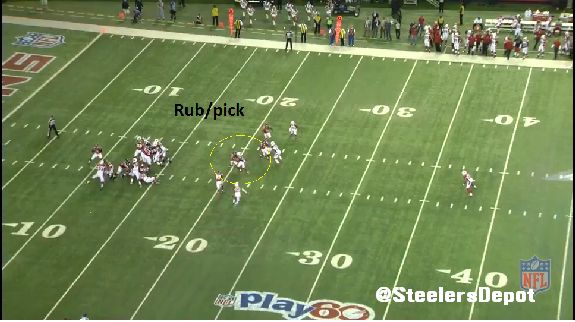 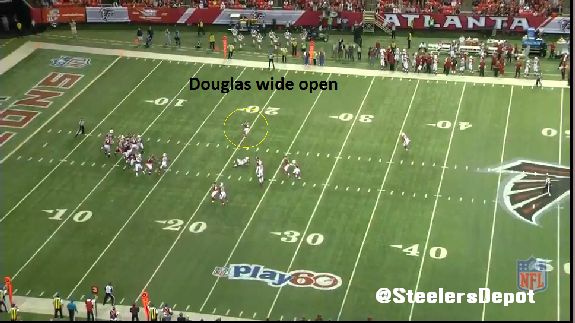 They might like to pull their lineman near the goal line. Ran two traps (one pass) in a sequence against the Cardinals. Like to get their OL moving in the red area.

– Have used Gabe Carimi as a tackle eligible in short-yardage. Have also shown looks of an unbalanced line, kicking Matthews over to the right side.

– It’s a front seven that does not generate pressure. Only 15 sacks in 2014, tied with the Cincinnati Bengals for the worst mark in the league. Seven of those have come in two games against the Tampa Bay Buccaneers. Their defensive tackles have combined to play 1600 snaps and have just two sacks. Only one since Week Four. Astoundingly low.

– But their interior line may still get more pressure than their ends. Which is really saying something. Rookie Ra’Shede Hageman poses size/length issue but barely plays. Three snaps against the Packers last Monday night.

– Thankfully, the Falcons still have Kroy Biermann who makes up for nearly a quarter of the team’s sacks. He’s an effective pass rusher who can play either end spot. Active hands and can swim or rip.

– Osi Umenyiora is strictly a third down pass rusher. Now wearing #50 instead of 72, he’s a right end, meaning he’ll be squaring off against Kelvin Beachum. Just 2.5 sacks on the season while playing less than one-third of the time.

– The DL does an average job of holding the point of attack but can’t shed a block to save their life. They held a woeful Cardinals’ rushing attack in check, but got man-handled against the Packers. Didn’t’ let the Cardinals to have a rush longer than seven yards. The Packers’ first two runs went for 22 and 12.

– Not many “name” guys at LB. But Paul Worrilow is a good one. 116 total tackles, 38 more than the next Falcon. Not just a dude that has so many tackles because he plays on a bad team. He can take on blocks, shed, and find the runner. 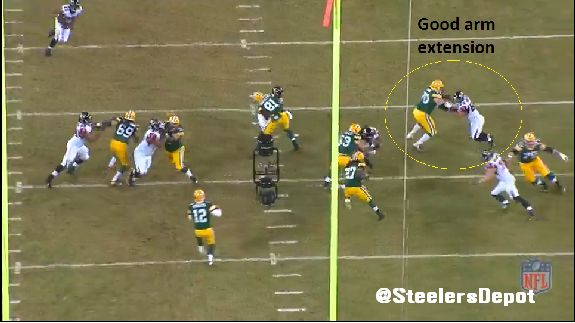 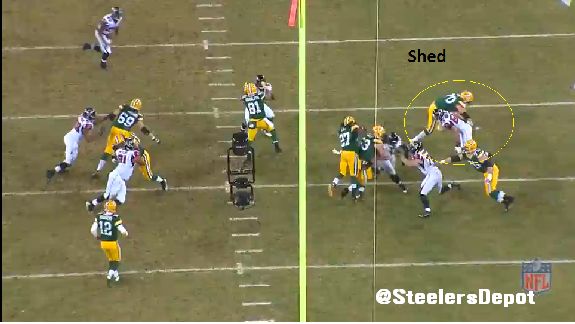 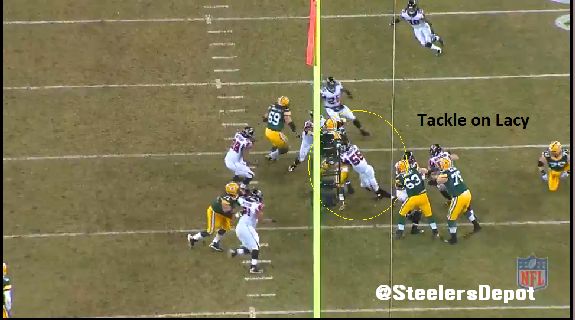 Quality athlete that does a solid job getting depth in coverage.

– No individual jumped out at me in the secondary. William Moore has forced two fumbles in just 281 defensive snaps. Big strip the Falcons recovered against Arizona. 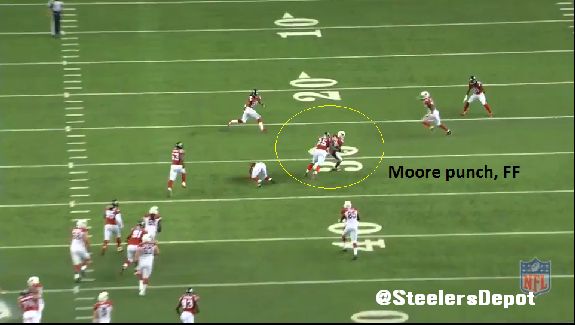 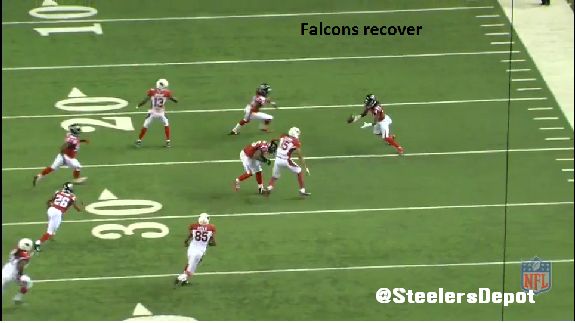 – Statistically, they’ve picked off their fair share of passes. Kemal Ishmael has four while Robert Alford has three.

– Overall, it’s a defense that surprisingly does a nice job tackling. Not many misses and they’re not afraid to get their noses dirty across the board.

– Schematically, there’s a couple things that I noticed. 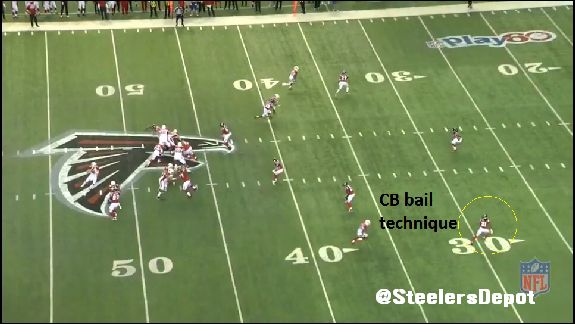 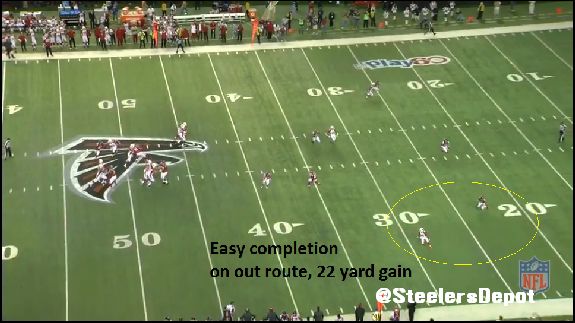 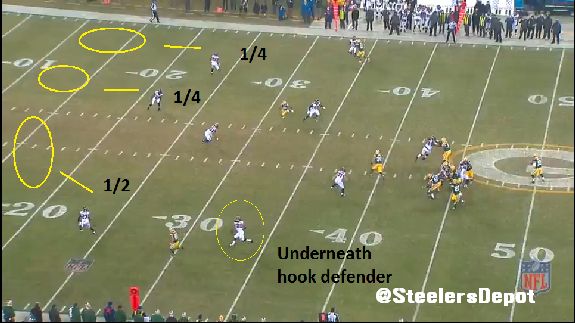 We’ll start semi-normally, MIKE ‘backer Worrilow gets a ton of depth, as deep as the safeties, to create a Cover 2 look with the corners (both rolled up) and a three deep look in the secondary. 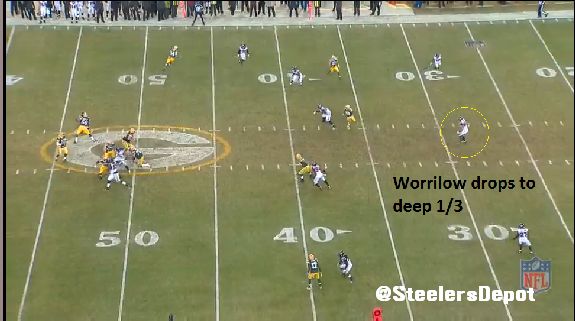 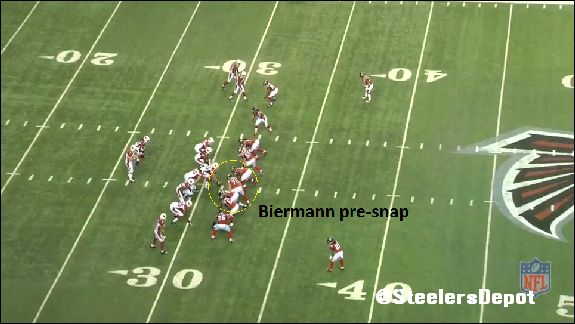 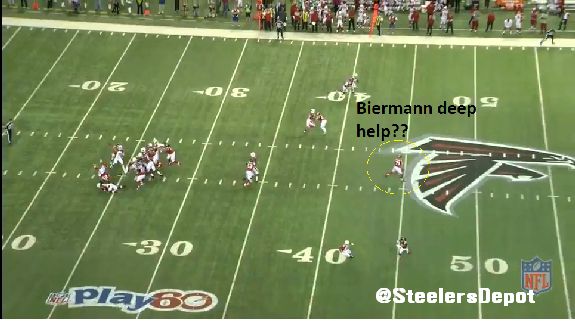 The end zone angle to show how far he ends up. Bizarre. 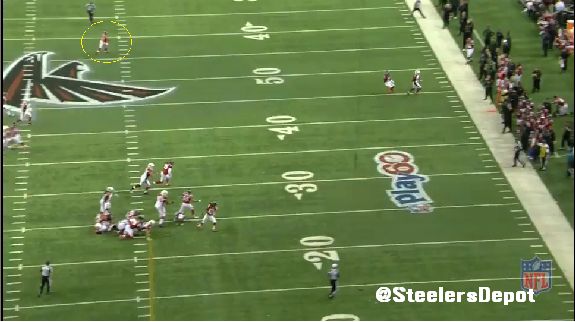 – Would expect Dri Archer to be inactive again as the Steelers gear up to stop the Falcons’’ special teams unit. Devin Hester had a 70 yard punt return for a TD called back because of a facemask he committed near the goal line. And he was an arm tackle away from busting a big kickoff against the Packers last week. Still a major threat. All hands on deck to stop him.

– On that 70 yard return, Josh Wilson and Ishmael did a terrific job of vicing the gunner, opening up the pathway. 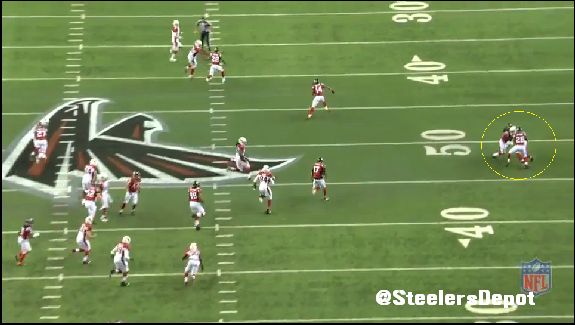 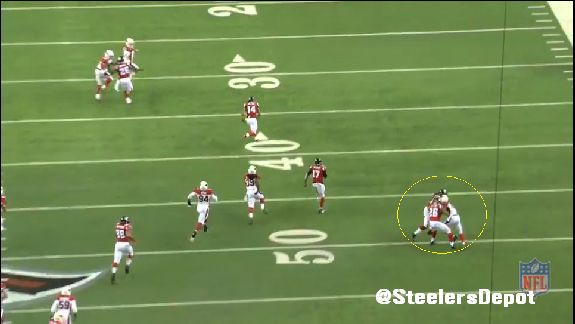 – Drew Davis and Dezmen Southward serve as the team’s gunners.

Credit to Weems but I find it strange the Falcons use a 5’9 195 pound back as their upback on punt coverage. In fact, the right side of their punting unit is small. It’s Weems as the upback, always shifted to the right, Rodgers (5’6 188) is the wing, and rookie Prince Shembo (6’2 254). It’s odd, and I’d try to attack it. Put Stephon Tuitt out there and see if he can’t bust through.

Should be pointed out the Falcons have not had a punt blocked this year. And punter Matt Bosher has forced more fair catches (22) than returns (21). Just one of three punters in the NFL to achieve that.

The Falcons employ six men on the front line of their kick coverage unit. Different than the Steelers, who only have five.