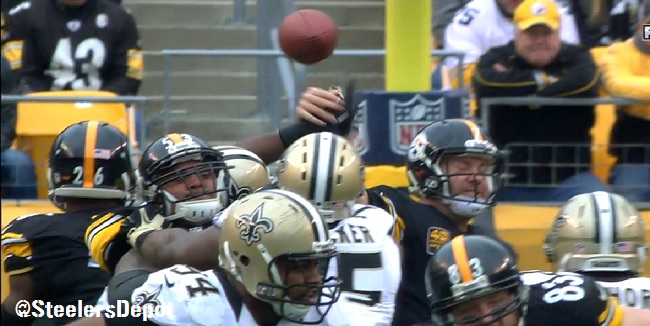 With 4:21 left in the first quarter of the Sunday game against the New Orleans Saints, Pittsburgh Steelers quarterback Ben Roethlisberger injured the wrist on his throwing hand when he hit the hand of linebacker Curtis Lofton with his follow-through on a pass to wide receiver Antonio Brown.

After suffering the injury, Roethlisberger was high and off target with several of his throws moving forward, but after the game, he refused to blame his inaccuracy on the injury.

“I am sure that every quarterback has that happen about every game,” Roethlisberger said during his post-game talk with the media. “Does it hurt? Yeah. Did it affect my throwing? No.”

When asked if the injury caused him to throw several of his passes too high from that point forward in the game, Roethlisberger said he didn’t think that was the reason why.

“I don’t think so, it was just one of those days when the balls were coming out high,” he said. “They tipped a lot of balls more than usual and I just have to make throws early on that I didn’t make tonight that I usually do.”

Roethlisberger went on to say that the ball was spinning good for him but that his passes were just high.