As Day 2 of Bell Watch 2014 began, Pittsburgh Steelers fans and reporters waited eagerly for an update from head coach Mike Tomlin, who addresses the media on Tuesdays.  Tomlin was in fine form, as he relayed that he had just seen Le’Veon Bell on a stationary bike, pedaling as if he were training for the Tour de France.  When asked if he considered this a positive sign, Tomlin quipped that “there won’t be any bikes on the field Saturday night”.  The Steelers coach mentioned that Bell is dealing with soreness and pain but gave very little in the way of detail, however, only saying that he was focusing on the players that he knows will be available.  He whimsically channeled Tom Bodett of Motel 6 fame, stating that they would “leave the light on for him” if Bell was felt to be well enough to play and protect himself.

Later in the afternoon, Will Carroll, a sportswriter who specializes in injuries, appeared in a video for Bleacher Report.  Carroll reported that his sources had informed him that Bell had a bone bruise.  Given that this is one of the most common results of a knee hyperextension, he is probably correct.

So what the heck is a bone bruise and what does it mean for Bell’s recovery?  The term bone bruise has been in the sports news in the past 2 days, as Dallas Cowboys defensive tackle Henry Melton just landed on IR and will miss the playoffs with the same diagnosis.

The good folks at www.md-health.com have done a nice job of defining it, so I’ll give them the glory:

Bone bruises can only be seen on MRI, not plain Xray.  Here’s a schematic image of the bone of the distal femur, just above the knee where Bell got hit: 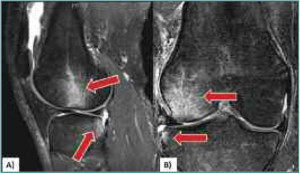 Unfortunately, Coach Tomlin didn’t fax me a copy of Bell’s MRI report, so it’s not clear which type of bone bruise the running back sustained.  But assuming he was diagnosed with one of these bruises, it certainly explains why he was clutching his knee in pain.

This diagnosis would not change the treatment plan for Bell – ice, anti-inflammatory medications (like ibuprofen or Toradol, which has gotten Cowboys quarterback Tony Romo and others through many games) and light activity to keep the knee loose and prevent the stiffness that follows swelling.  A stationary bike is the perfect therapy because it doesn’t require him to bear weight, which is clearly painful, but allows him to work on range of motion and minimize tightening of his quadriceps muscle.

Bell still has a long way to go before he rides himself into playing this Saturday.  Remember Tomlin’s words from his press conference: Bell has to be able to play AND protect himself.  And in just 4 days the Steelers face a fierce rival in the Ravens, particularly Haloti Ngata, Elvis Dumervil, and Terrell Suggs…none of whom will be shy about aiming straight for the right knee of the Steelers all-purpose back.

So while there’s a very good chance that Bell will be able to run by wild card weekend, I doubt very much that he will play in the game.  The Steelers will need to win this game without their MVP, but if they make it past the Ravens to the divisional round, the overwhelming likelihood is that Bell will be ready to go for the trip to Denver.