It may not necessarily feel that way due to the number of sacks that he’s given up, but left tackle Kelvin Beachum has really begun to settle down at the position, where he’s now started 22 games as a professional over the last two seasons.

His strength will always be in pass protection because he can more easily overcome size disparities using leverage and technique in the more passive drops used in that area, but as a matter of fact, Beachum actually had a very solid game as a run blocker as well, which might merit a film review session of its own.

For now, let’s take a look at some of the work that he did against the Tennessee Titans on Monday night in protecting Pittsburgh Steelers quarterback Ben Roethlisberger. 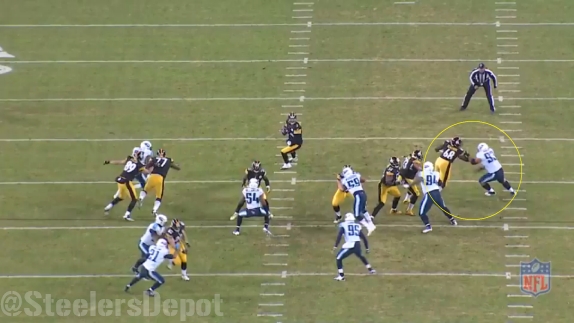 Let’s start with a lowlight that comes in the middle of the first quarter, going up against rotational defensive end Mike Martin. On this occasion, the end was able to catch Beachum oversetting to the outside and swat his hands down to win the inside.

Ramon Foster was there to pick him up, which Beachum likely knew, and Roethlisberger was never pressured from the left side on this play, but it shows a technical lapse that he quickly corrected just a few plays later.

Just two snaps after the previous play, Beachum got his rematch against Martin and was the clear victor, showing a steady base and perfectly mirroring the rushing end. He shot his right hand out early to assure resistance against an inside move, and was able to keep his arms in Martin’s chest until the ball was out of the quarterback’s hands for a 23-yard gain down the field.

Late in the first half, the Steelers faced a second and 15 after a five yard loss on a screen pass, and Roethlisberger was facing pressure with nobody to throw to. The Titans tried to scheme pressure, dropping the linebacker in the B Gap and stunting the rusher on Beachum’s side around to the opposite side, with Martin crashing down from center to left tackle.

It didn’t take Beachum long to diagnose at all, ad he was able to bury the end by keeping his arms out. Roethlisberger looked surprisingly comfortable with his left tackle hand fighting immediately to his left, and he even motioned that way before finding a receiver for nine yards after about six seconds.

Following a false start, however, the Steelers were still facing a third and 11, and the Titans tried to scheme pressure again, twisting the two rush linebackers on Beachum’s side. He passed off the first one easily to Foster and fought off the second long enough for Roethlisberger to get into the throw for 17 yards to move the chains.

Antonio Brown was the recipient of both of those throws, and it’s only fitting that the final passing play we’ll review is the one that landed in the end zone in Brown’s hands. It was Beachum’s block against Kamerion Wimbley on an island that bought Roethlisberger to find time to get to Brown, as the left tackle ushered the rusher up the arc and out of harm’s way, using a good punch move to keep him at bay.