Even though the Pittsburgh Steelers managed to take the ball across the goal line six times once again on offense for the second week in a row, it wouldn’t necessarily be accurate to ascribe that too much to the offensive line as a whole.

The guard play in particular was lacking, and the Baltimore Ravens won more than their fair share of skirmishes in the trenches. Center Maurkice Pouncey may have been one of the better represented members of the line in this game, but even he didn’t come out of it unscathed.

To be honest, however, it’s not easy going up against Brandon Williams and Haloti Ngata, and he surely handled it better than most have. He got a little bit of both on the Steelers’ first running play of the game.

Williams, the nose tackle, lined up square over the center, with Ngata to his right. On the snap, the offensive line all flowed to the right, with Pouncey able to get inside of the nose and turn him with the help of the left guard. With Williams taken care of, the center moved up to chip Ngata as well.

But he missed on a stunt on the very next play and got his quarterback hit. It was third and seven and it forced Ben Roethlisberger to rush his throw, resulting in a three and out to open the game.

Pernell McPhee burst through the A Gap and occupied Pouncey, and even though David DeCastro recognized the bluff late and picked it up, the center failed to recognize linebacker Daryl Smith looping around into the space creating by the rushing lineman. 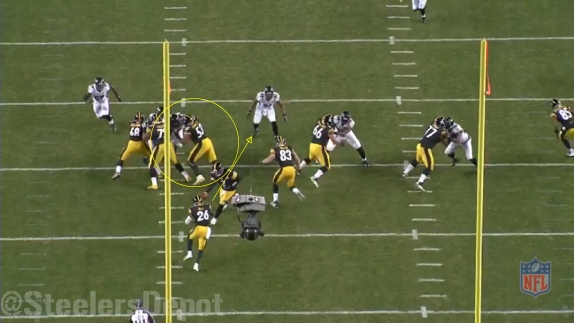 With the Ravens shifting to their sub-package, Ngata shaded over center on Pouncey’s left shoulder. Off the snap, the offensive line already had the advantage. The line from the center to the left all shifted to the left, which drew Ngata in that direction and enabled Pouncey to lock him in, helping to provide a running lane for Le’Veon Bell up the middle.

The Ravens continued to play in their sub-package for much of the first half. Pouncey and Ramon Foster double teamed Ngata on another running play in front of Bell, following that block up the middle for four yards. Pouncey peeled off the first block to chip at a linebacker, but DeCastro lost his one-on-one matchup.

Midway through the third quarter, on the running play better known for an illegal low hit by Terrell Suggs, Pouncey did a good job of handling Williams on his own after an initial double team with DeCastro. The two worked him to the right as the run went left, and Pouncey continued to wrestle him out of the play once the right guard left to find somebody else to block.