Game notes from the Pittsburgh Steelers 43-23 victory over the Baltimore Ravens.

– First snap. Cam Heyward shows a great job to stay square to this double team, split when the frontside blocker moves to the second level, and records the TFL. 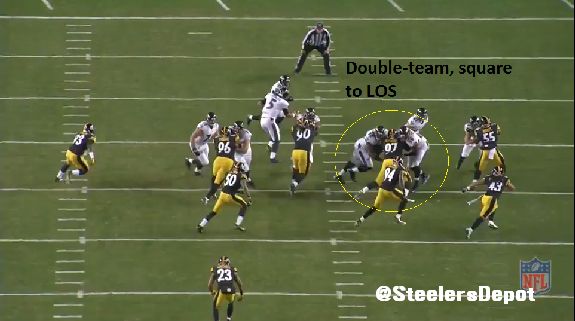 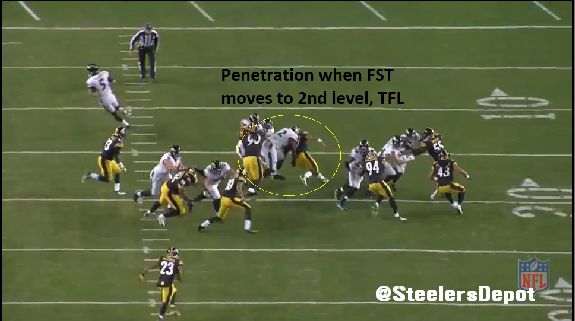 – Nice play from Ryan Shazier. Shows off athleticism and his football IQ. Reads the pulling tight end and starts to flow that way. Shows he’s reading his post-snap keys. But he realizes he has to fulfill his run fill and stays at home. Once he sees where the running back is going, he explodes down the line and makes the tackle. Little bit of everything from the rookie.

– Steve McLendon shows his first step and what makes him valuable. Leverages center Jeremy Zuttah, sheds, and makes the tackle. 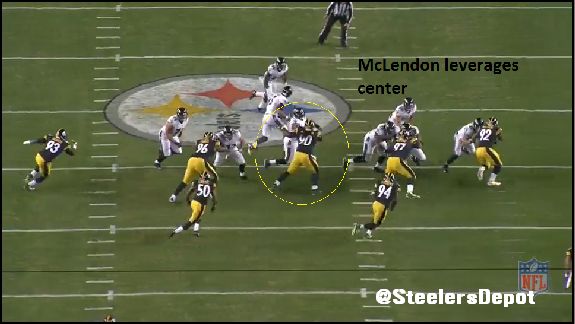 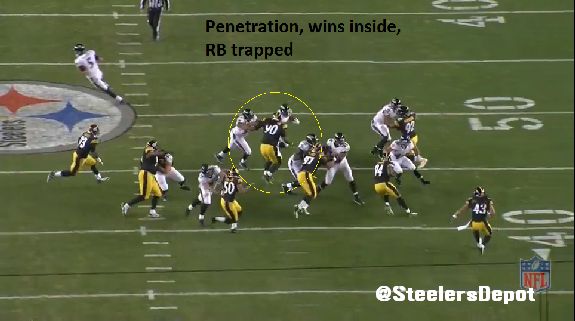 – Dave Bryan was spot on when he said Brice McCain got greedy and looked back for the ball on Torrey Smith’s long touchdown. Got himself out of phase. But I’m not a fan of asking him to play tight coverage when he’s on an island against a speedster. Setting him up to lose. 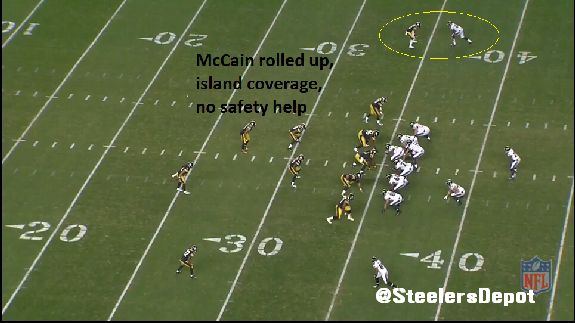 – Poor technique from Jason Worilds. Takes on this block with the outside shoulder, instead of the inside. Running back is able to hit the edge. Want to take that block on with the inside shoulder and spill the run inside. 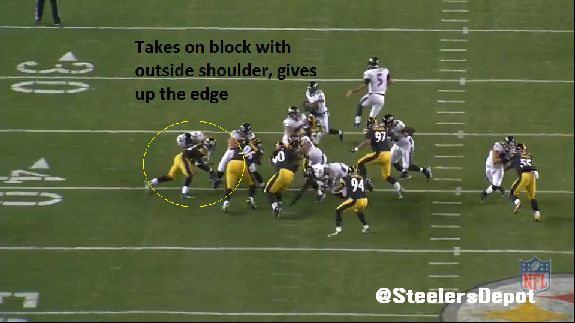 – Even with a bucket step, Ramon Foster shouldn’t be allowing inside penetration against a DT with a pre-snap outside shade. 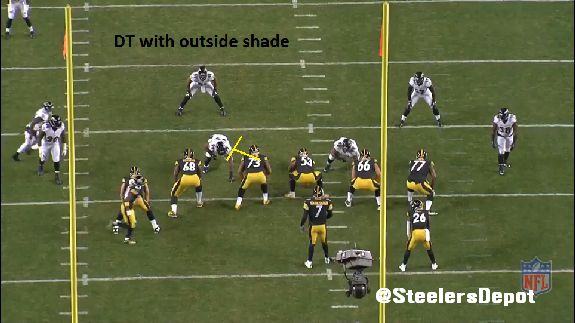 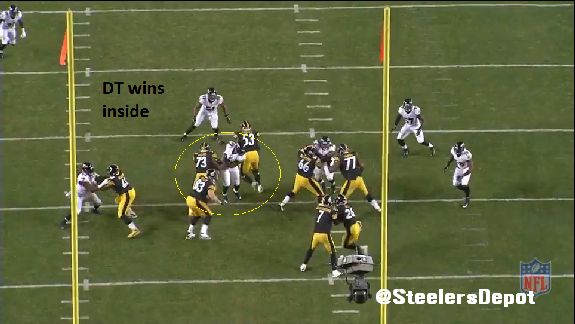 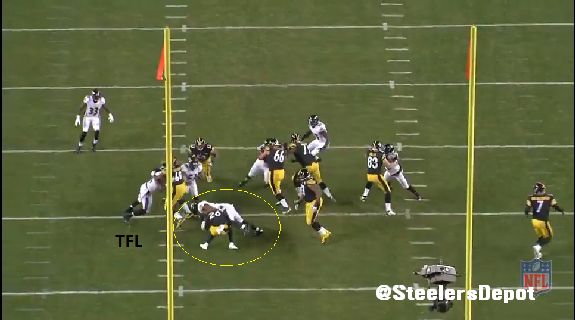 – Kudos to Thomas for forcing a fair catch on a 51 yard punt by Brad Wing in the first quarter. What good gunners do. Especially against the single jammer he was facing. 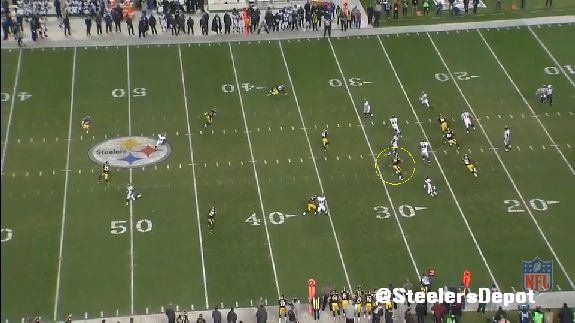 And winds up here to make the tackle. 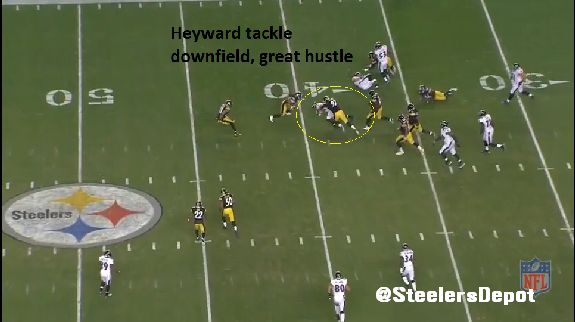 Hustle and heart. What every one of these DL have in spades.

– So many pieces going on here that it’s too much to show in pictures. I’ll throw the GIF below. James Harrison’s first sack of Joe Flacco. Love this scheme. Steelers get a free rusher despite rushing only five versus a seven man protection.

Every defender with his hand up pre-snap. Knowing the Ravens are poor in their slide protection, this creates chaos.

Four blockers versus a three man rush to the offense’s right. And the Ravens still lose. The RG and RT double Brett Keisel while the TE and RB are occupied by Sean Spence flying off the edge.

Stephon Tuitt rushes in free while James Harrison does a terrific job of bending the edge to slip past left tackle Eugene Monroe.

What you see below really gets me excited. And isn’t a product of the Steelers being up by a ton and offenses being forced to pass.

– Steelers ran Power O with David DeCastro leading the way on back-to-back plays for gains of nine and four.

– Talk about knowing where you second read is at. This is Ben Roethlisberger being able to see the whole field and process information at a remarkable pace.

This tight end screen is snuffed out. With Matt Elam coming on a blitz, Ben has to get the ball out of his hand quickly. Little harder to pick up on in the pictures but Ben immediately turns to Antonio Brown coming across the field and fires. Doesn’t have to turn and process. Just progression and ball out. Pass is almost on the money and complete though it does hit the turf. 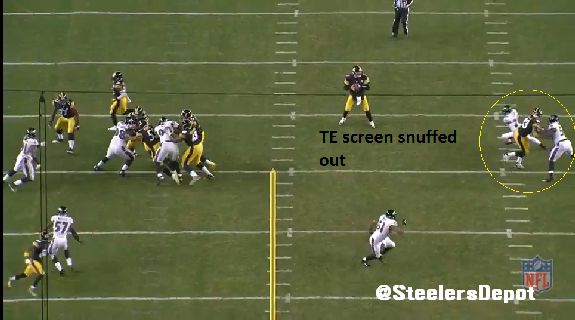 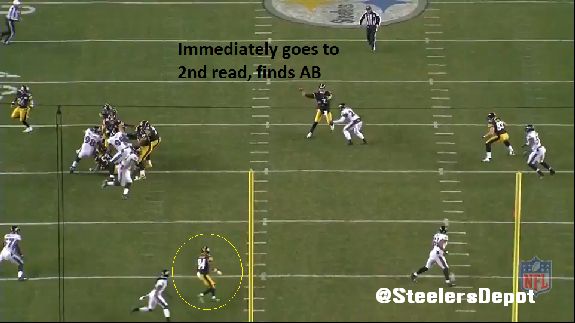 – Martavis Bryant could have potentially had a third touchdown had Ben seen it. Cornerback passes his route off to no one and Bryant is streaking downfield. Throw ends up being underneath, unfortunately. 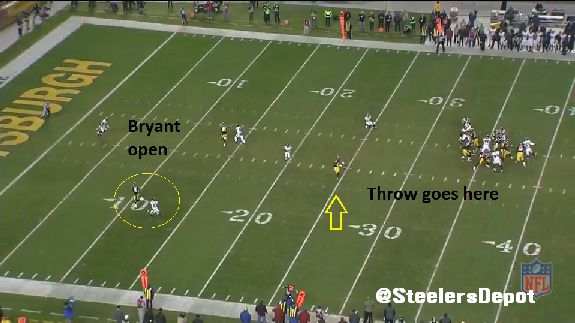 – Always rag on offensive lineman who get walked back into the pocket on bulrushes. So have to give credit to David DeCastro who defended the bull rushes of 335 pound Brandon Williams well all day. Absorbed and anchored well. Keeps the pocket clean for #7. 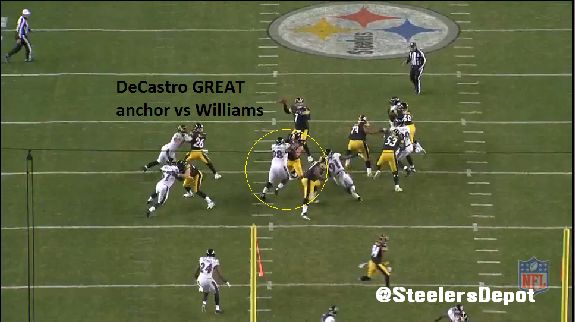 – This is very minor but really wanted to point out some OL technique. Focus back on DeCastro. GIF is below because it’s too hard to see in the pictures.

Watch his left arm. He’s going to engage the defender off the ball and then secure the block and the seal by disengaging his left arm briefly before throwing it back into the DT’s inside hip to generate that extra power. Subtle but well done and it helps him control the DT.

Ramon Foster can’t do the same with his man though it’s important to point out his is Williams.

– Jason Worilds’ INT. Steelers offer up field (wide side) pressure. Baltimore slides to the right, away from the blitz. The RDE slants into the LT, the safety blitz occupies the RB, and James Harrison splits the two. Pressure creates the turnover. 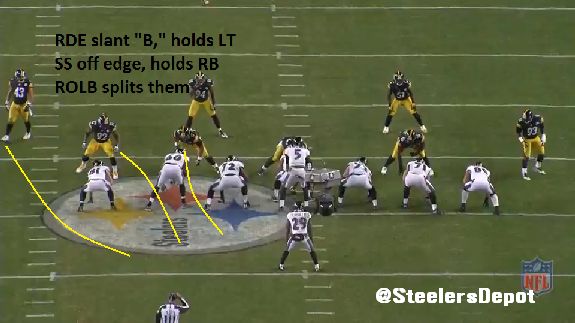 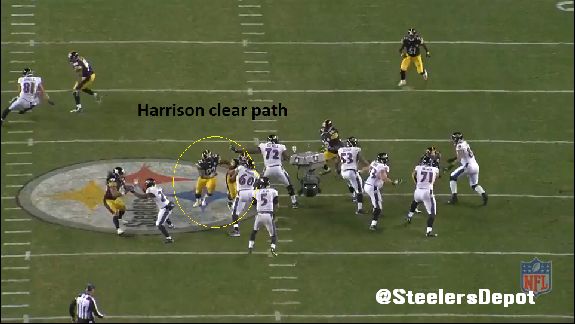 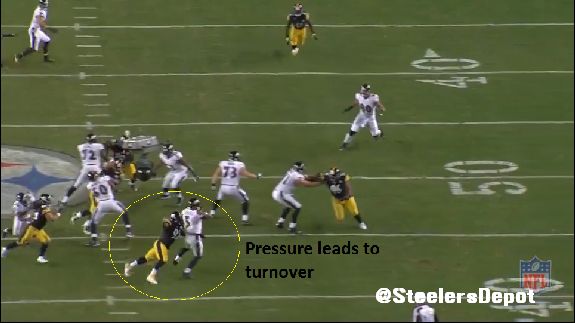 It was Jason Worilds’ first INT since 2005. His senior year of high school.

Also, Joey Porter sprinted down the sideline on the INT. Somebody put a helmet on him. 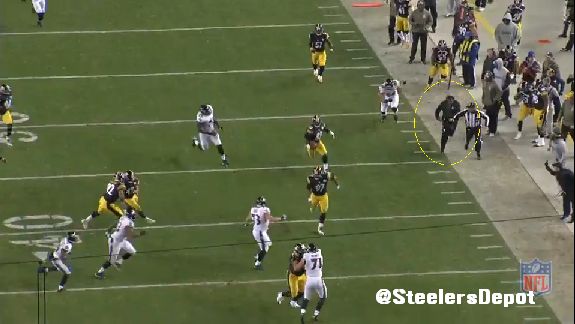 – McLendon pushing Zuttah back, forcing Flacco to throw off his back foot. Spence slips and the catch is completed but a nice individual win from McLendon. 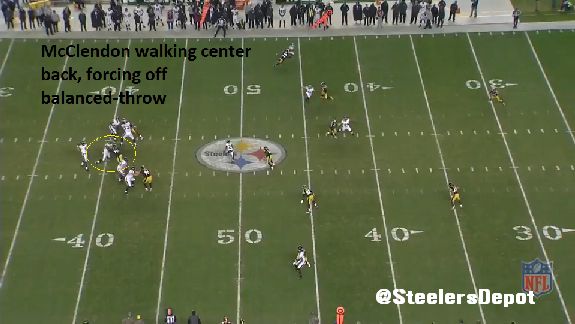 – Need a better anchor from Foster, who had a poor game. Pernell McPhee gets under and knocks him off his base to get interior pressure. 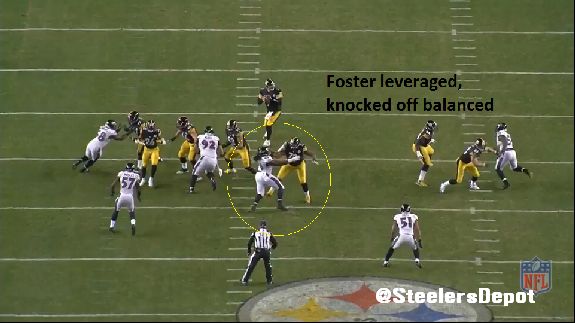 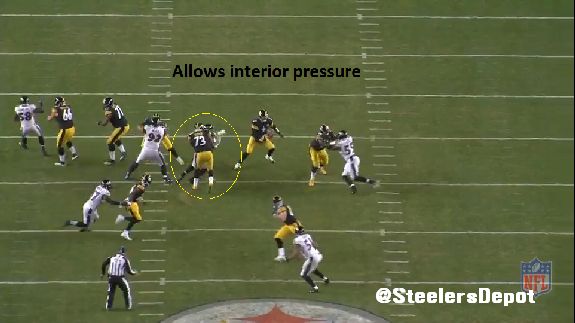 – Heady play by Matt Spaeth to immediately release on a route once he saw the botched XP.

– Arthur Moats’ sack before the half. Three man overload. Stresses the center and it’s hard for the Ravens to pick up. Another stunt to give free pressure. 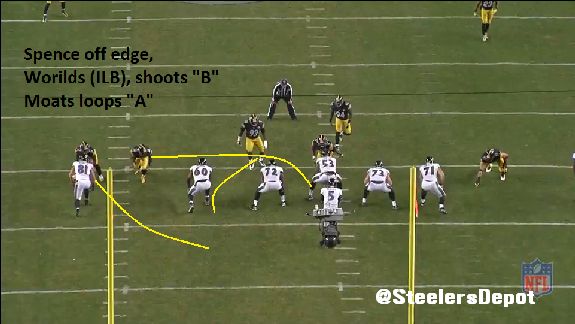 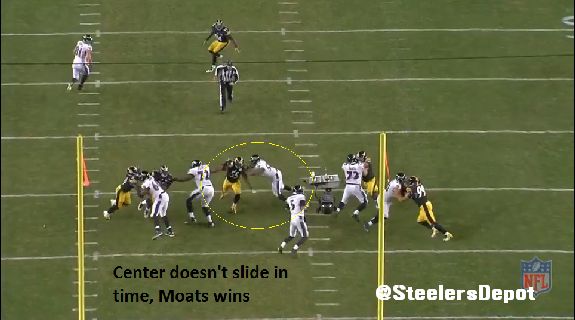 – Cam Heyward pancaked by the powerful Kelechi Osemele at the end of the first half. Stuck and gets taken to the ground. Heyward is the RDT.