Rookie wide receiver Martavis Bryant made an immediate impact in his debut the week before, catching a 35-yard touchdown pass for the first reception of his career and finishing with two receptions for 40 yards, while also displaying his potential as a vertical threat on four deep targets.

Ben Roethlisberger’s first pass of the game when to Bryant for five yards, as did the second two plays later. On that play, the offensive line had to pick up a pair of stunts to give Roethlisberger the time to throw. They did.

The Steelers went five wide on the play, with Bryant in the left slot and the two tight ends to his left. Roethlisberger got the mismatch he was looking for, as the Colts responded by covering him with a linebacker. The speedy receiver was able to blow past him with ease and tucked under the safety for a 19-yard completion.

On the first play of the second quarter, Bryant got his first taste of work in the red zone, and it tasted good. On second and goal from the five, he was the lone receiver on the left, with Heath Miller left on the line and Le’Veon Bell in the backfield to the left side of the quarterback. Bell floated wide left while Miller ran straight and curved right. Those routes provided Bryant with space, and Roethlisberger with an easy throw, for the easy red zone touchdown.

Roethlisberger went back to his new toy early on the Steelers’ next possession, tucking him in behind Markus Wheaton flanked left against stacked corners and a single high safety shaded the other way. Wheaton peeled inside and Bryant burned past the tight corner, while Roethlisberger floated a perfect pass over the top for a 52-yard completion.

The Steelers opened up the second half with another score on a second Bryant red zone touchdown, this time from the two-yard line. With Roethlisberger under center and all other skill players center or to the right, the rookie was left on his own wide left against the corner. The fade came in, Bryant high-pointed it beautifully, and that was it. 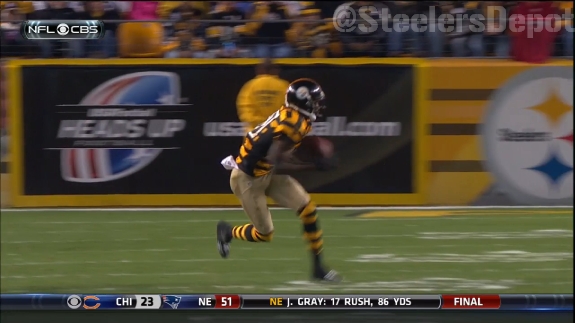 He did manage to finish off his day with a big drop midway through the third quarter after having a big hand in the Steelers build a 42-20 lead by that point. Roethlisberger was looking to hit him on a quick route in space on first down, which would have left him with just the safety to beat if he could have grabbed it. Instead, it led to the Steelers going three and out for the only time in the game.

Bryant also appeared to have run the wrong route or missed a signal late in the second quarter on another incompletion from Roethlisberger. These two plays serve as reminders that, while there are a lot of nice things the rookie can do, he is still working from a limited number of plays, and is far from a finished product yet.