Sack breakdown of the five given up by the Pittsburgh Steelers against the Tennessee Titans in Week 11.

Appears Ben Roethlisberger wants to hit Antonio Brown running a dig route across the middle. With the eight in coverage, windows are tight and Brown isn’t open.

Ben never gets off that initial read and appears to stare Brown down the whole try. Tries to point and redirect him as it turns into a scramble drill but it never opens up.

Because of that, Roethlisberger misses two open receivers. Archer wide open on the wheel and Miller on the checkdown. Checking down on 3rd and long is never ideal but with it still being early, you can live to fight another day. 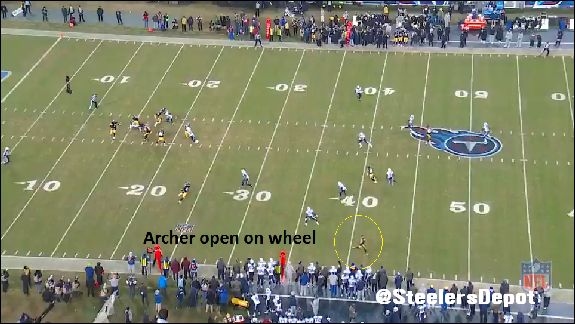 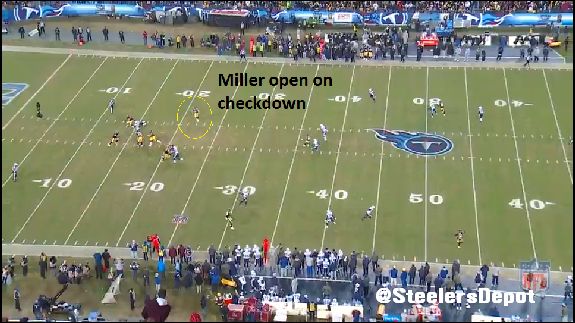 Ben ends it by seemingly running into the Titans’ defender.

Blame completely falls on #7 for never attempting to go through his progressions.

On LeGarrette Blount’s lone – and final – snap, with the Pittsburgh Steelers, he’s likely to blame for allowing this one.

Although Blount does have his eyes stuck to his right pre-snap, anticipating a blitz that never comes, he has to pick up the linebacker he runs right past. Has to recognize there’s no other help with Beachum sliding down and no one else is responsible. Simple BoB protection.

For a guy that concerned over a blitz, I can’t understand why he would let him just rush free. 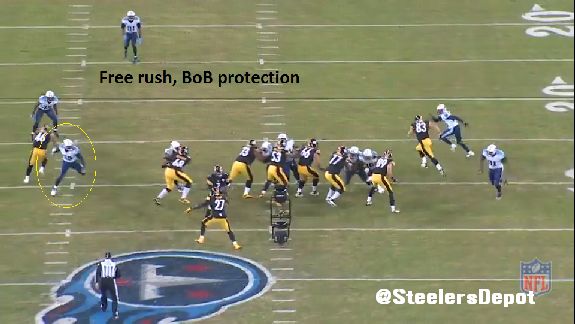 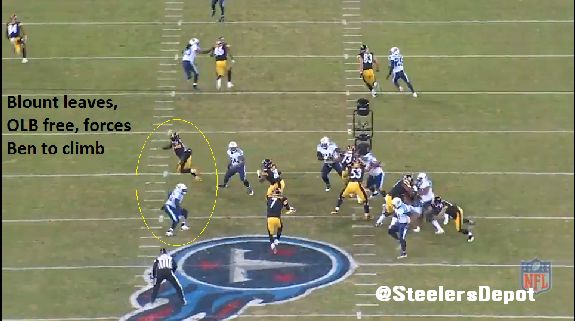 Elsewhere, Matt Spaeth’s eyes dart inside and he’s late moving laterally to pick up Derrick Morgan off the edge. Pressure forces Roethlisberger to climb and he’s chased from behind. 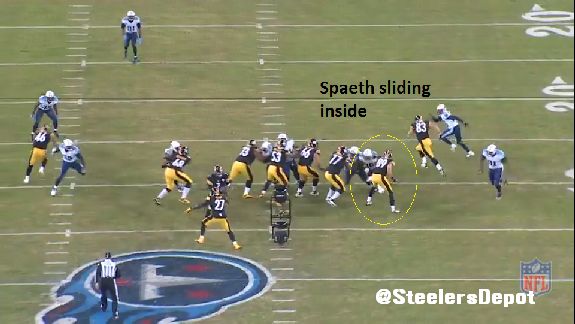 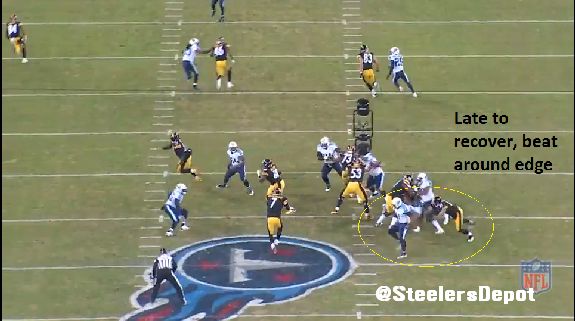 I’ll put half on Blount and half on Spaeth.

The penetration doesn’t allow Marcus Gilbert to immediately slide to the inside as Shaun Phillips ducks that way. Don’t believe it’s a designed stunt. 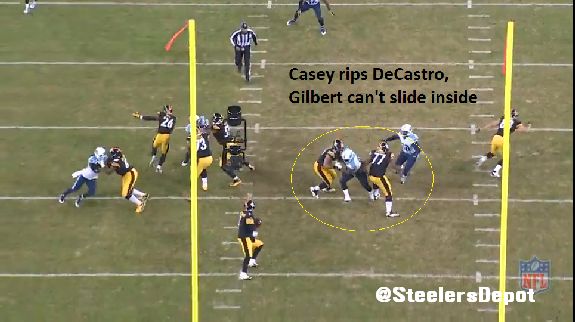 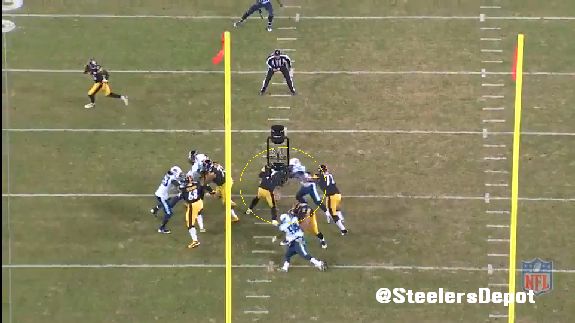 The pressure from Casey forces Roethlisberger to climb the pocket and Phillips cleans things up.

Disappointing too because Martavis Bryant had two steps on the corner running down the seam. 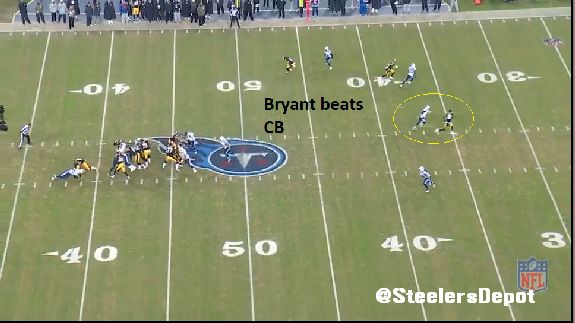 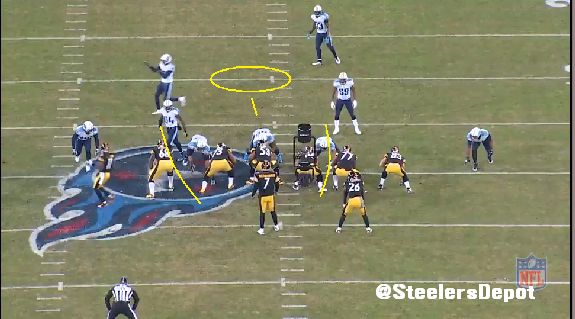 The Steelers slide to their left working off the assumption Woods will rush. But because he drops, DeCastro and Gilbert double the same defender. Impossible to know and a win schematically for the Titans.

This subsequently creates a couple of difficult matchups for the Steelers. Heath Miller is asked to reach across and slide in front of the blitzing linebacker, who has the advantage of a running start. Difficult to reach the midpoint of the defender and block him from where he was lined up pre-snap. 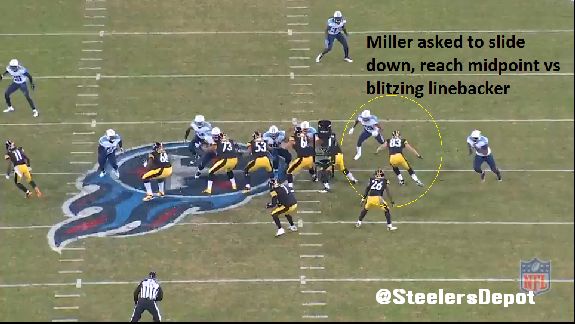 Although the source of the pressure doesn’t come from here, Le’Veon Bell is left one on one with Derrick Morgan. Ideally, Miller’s and Bell’s assignments are switched. Miller on the end with Bell on the linebacker. But because of the slide protection to the left, that’s apparently not possible.

Miller is beat to the inside. Elsewhere, Ramon Foster is late seeing the other linebacker on the blitz. Catches him under the helmet at the last second with an arm but it isn’t nearly enough to stop his rush. 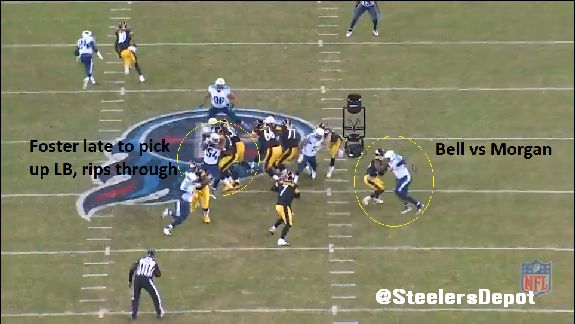 The pocket collapses and Ben is taken down.

Half the blame goes on Foster for being late with the recognition. Other half is tough to assign, a couple different culprits you could argue, but I’ll put it on the defensive scheme. They win here. Steelers slide it correctly and have to respect the possibility of everyone – including Woods – rushing.

Blame: Half on Foster, half on scheme

Steelers have enough to block the four man overload. Three lineman and the back Bell. David DeCastro blocks down anyway, doubling up with Pouncey.

As Williamson loops over, he finds a free lane vacated by 66. No reason for the Steelers’ guard to leave his spot so soon with proper protection. Especially knowing that typically, the tackle will provide help to the tight end on the edge. 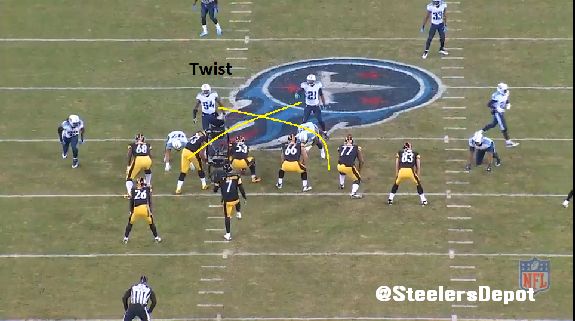 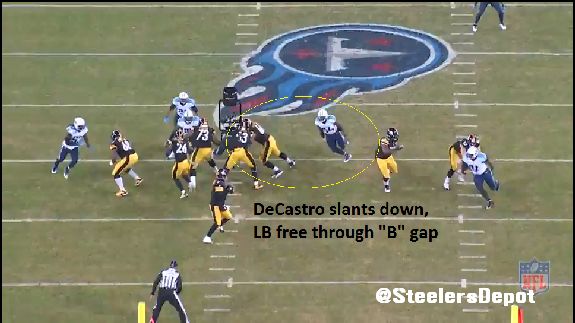 DeCastro can’t also give help, leaving the blame for this sack on him.