Sack breakdown of the two allowed by the Pittsburgh Steelers versus the New York Jets Sunday.

Jets with an aggressive pre-snap look here. Lot of pre-snap movement, organized chaos. As stated, they bring seven. Four from the offense’s left side and three from the right.

Initially, it would appear the Steelers have the grouping to defend it. Heath Miller is asked to stay in and block. Toss in Le’Veon Bell and you have a seven man protection versus a seven man blitz.

We’ll point to two issues but the main one falls with Bell. Seeing the seven man rush and knowing he’s the seventh defender, he must stay in to block. Instead, Bell check/releases. Given the down and distance, he’s not that useful on 3rd and 15. He’s better served to stay in and block.

Because he bails, safety Jaiquawn Jarrett is the seventh and free blitzer. Picture of the pre-snap look and Bell leaving shown below. 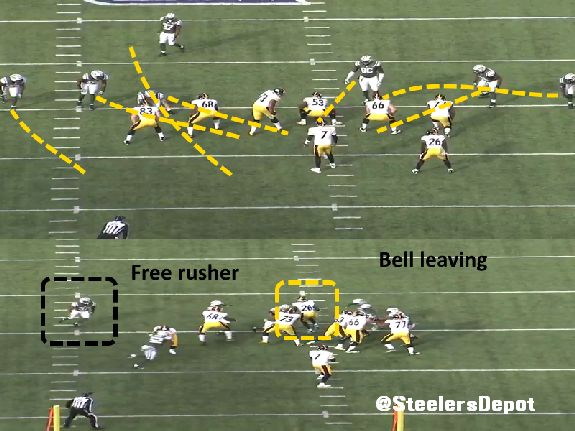 The other issue is the lack of a hot receiver. To put it on a specific player, Markus Wheaton out of the slot. The blitz happens right past him. Even with the D/D someone needs to get their head around and look at their QB.

You can see even after a few yards downfield, no one has turned to the ball. 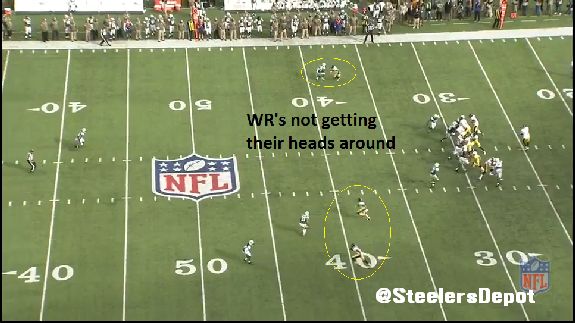 Perhaps that’s because in theory, the Steelers should have had it blocked. And that the blitz could be picked up, placing less of an emphasis on a hot read.

Which is why I’ll give the full blame to Bell for leaving his assignment. 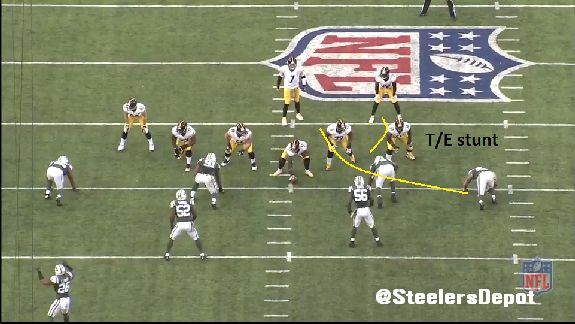 Ramon Foster picks up the looper fine and left tackle Kelvin Beachum isn’t late with his eyes once he recognizes the loop. But the RDT has a good first and gets into Beachum’s pads by the time the left tackle gets his head around.

He leverages Beachum, getting under his pads and knocking him off balanced. Sheds him and takes down Ben Roethlisberger. 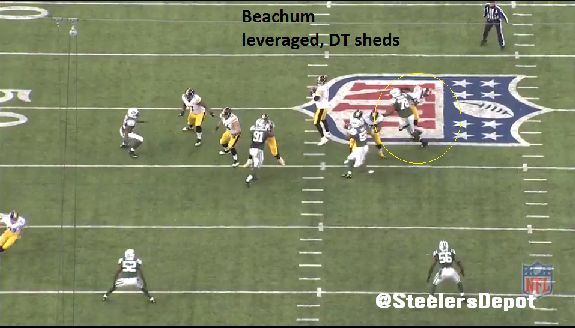 Real quick look at the route concept. One we’ve seen occasionally from Todd Haley. Predominately last year and once, it also resulted in a sack.

Fake bubble screen while trying to throw vertical down the field. Jets aren’t fooled though and cover it well. 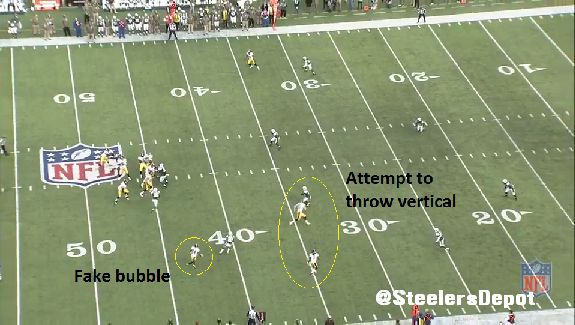