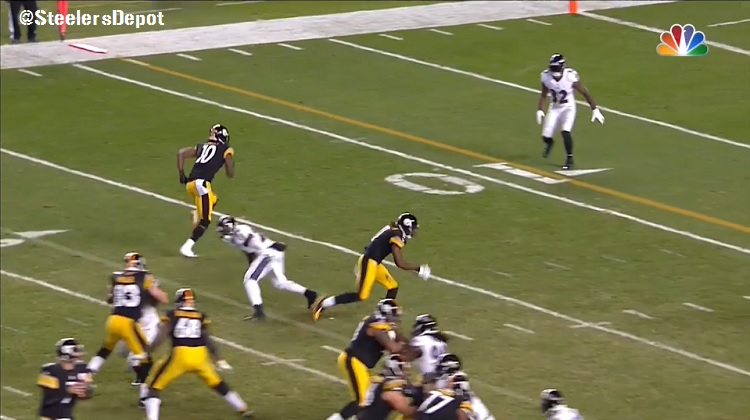 Good play design is nothing without great execution and the Pittsburgh Steelers showed Sunday night against the Baltimore Ravens that they had both of those areas covered on the fourth quarter touchdown pass to rookie wide receiver Martavis Bryant.

On the third down and nine play from the Ravens 18 yard-line, the Steelers use 11 personnel with Bryant and Markus Wheaton both lined up on the strong left side of the formation. These two run a “Dino” concept, which is essential two post routes, and they run it perfectly against the Ravens cover-3, zone under defense.

While the routes are run to near perfection, quarterback Ben Roethlisberger does an excellent job of freezing the middle safety by giving a quick pump fake to wide receiver Antonio Brown, who has run a short jerk route in the right middle area of the field. Roethlisberger really has two open receivers on this play but chooses to hit Bryant right at the goal-line.

The Steelers kept tight end Heath Miller in to pass protect on the play and the offensive line easily handled the Ravens four-man pass rush.

All four of the animated gifs below should provide a perfect look at the play from several angles.