We should find out at some point today whether or not Baltimore Ravens linebacker Terrell Suggs was fined for his controversial hit from behind on Pittsburgh Steelers running back LeGarrette Blount in the third quarter of the game last Sunday night.

In the meantime, it’s being reported by the Baltimore Sun that Ravens linebacker Albert McClellan has been fined $8,268 by the NFL for his personal foul against Steelers linebacker Sean Spence.

McClellan, who is expected to appeal the punishment, was flagged for his hit during a second quarter punt that was fair caught by Ravens wide receiver Jacoby Jones.

In the animated gif below, you can see McClellan hit Spence from the side and while it appears to have been a legal block, it might very well have come after the whistle.

In addition to Suggs and McClellan being fined, expect to hear later today that Ravens cornerback Lardarius Webb, linebacker Courtney Upshaw and Jeremy Zuttah were also fined for their infractions Sunday night.

As for Steelers players that could possibly be fined for their actions in Sunday night’s game, nose tackle Steve McLendon might have his check docked thanks to him driving Ravens quarterback Joe Flacco to the ground. 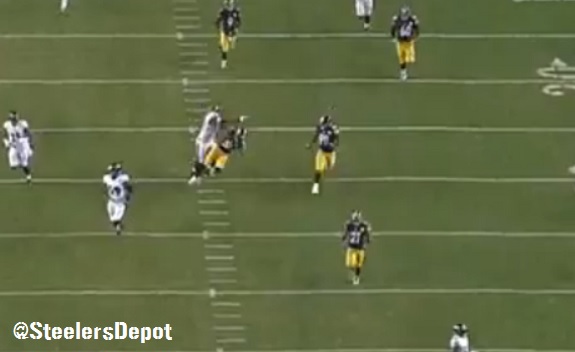